A Check-in with the debate team 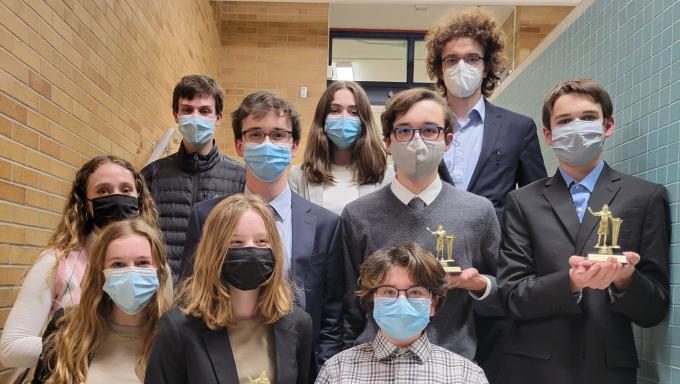 The BSM Debate Team poses with their trophies after a successful Robbinsdale-Cooper tournament.

After a fully online year of debate practices and tournaments, the 2021-2022 BSM Debate Team’s season is back in full swing.

One of the many competitive clubs at Benilde-St. Margaret’s, the Debate Team, is made up of approximately 20 members from all grades in the senior high. There are three teams – Varsity, JV, and Novice – and they practice twice a week after school. After extensive research on a topic, they argue for or against that topic against many other schools at weekend tournaments. “We go to meets all around the metro area usually,” senior captain Aidan Traverse said.

These in-person tournaments have proved to be a hit for debate members and nonmembers alike. Though typically about eight hours long, they have been going very well for the team. Many members on the team have been placing well, and the team has been glad to be attending in-person tournaments with completely different atmospheres from online ones. “[The tournaments are] long, they’re kind of grueling at times, but in the end, I’m very happy that I’m going to these tournaments,” senior captain Luke Evans said.

The team has also been seeing lots of growth from many members. There are lots of new students joining the team, and people have made improvements throughout the season and often move up from team to team. These improvements have been shown through the team’s results; many victories and high placements have been coming to BSM’s Debate Team. Most of all, the team is proud of their progress throughout the season. “And a lot of our novice members have been showing some real, real good progress as the season…has progressed,” Evans said.

The team recently completed their last regular season tournament, and now is preparing for JV-Novice state on December 3rd and 4th. Though the team has been placing well all season, the team’s main goal is to round out the season with pride while having a good time. “We just want to make sure everyone has fun in their last few weeks of the season,” Traverse said.