BSM Girls’ Hockey Locker room gets a facelift this year 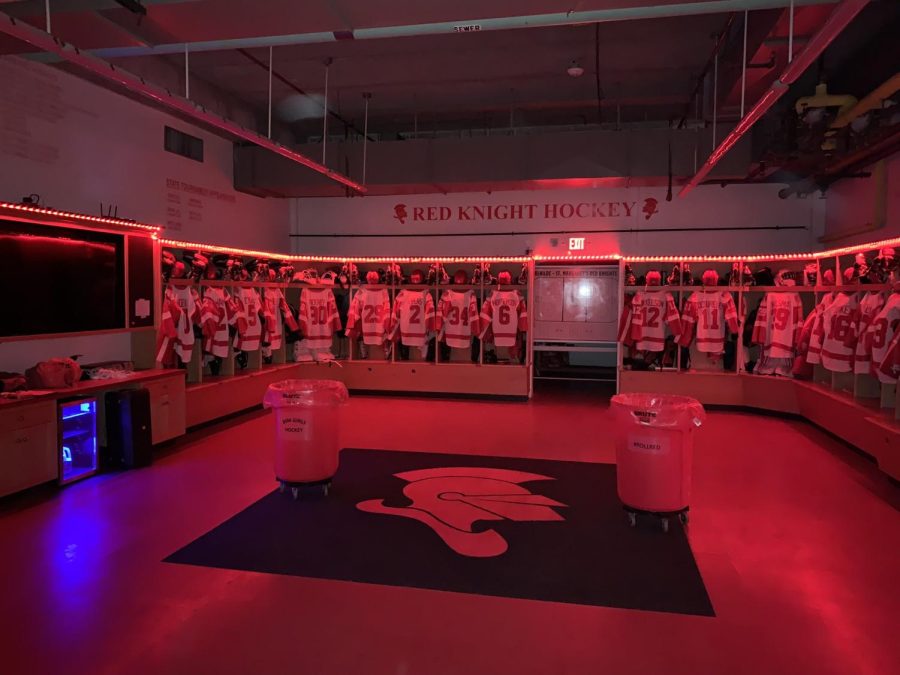 LED lights are apart of the new remodel in the girls' hockey locker room at the SLP Rec center.

The BSM girls’ hockey locker room has remained untouched and unupdated for the past 6 years. While updates are not mandatory, they are a fun and easy way to get people excited for the upcoming season. After the boys’ locker room was updated, the girls decided it was time to make some changes. Hockey captains Sophie Melsness, Emma Peschel, and Emma Hoen took charge on these updates.

The captains first decided the back room of the locker room was the first thing on their list. Instead of a messy back room filled with boxes, it is now filled with stalls and shower heads for the athletes to use at any given time. “The new showers are super nice! We upgraded the water temperature and pressure while also creating more privacy per shower. We also added a mirror and new shower heads! This will be so much more convenient for players who need to shower in a hurry,” Hoen said.

The next adjustment was the lights in the locker room. Before, the girls’ team had old Christmas lights. In their place came brand new LED lights. LED lights became very trendy in the past few years, and this was a trend the girls knew would be a great addition to the locker room. “The LED lights are really cool and a really nice addition. It adds a lot of character to our locker room and adds something that we’ve never had before. I’m really excited about them and I’m glad we put them up. It adds a ton of character and something that should be there for the next few years,” Peschel said.

After LED lights came new stalls. Due to lots of use over the past few years, some of the benches on the stalls have broken. This was a much needed update for the program, especially considering some of the stalls were unusable. “The stalls that were replaced allowed us to complete our locker room. We’re able to fully use those stalls and the players who occupy them won’t have to be cautious about anything,” Hoen said.

Next came a new sound system. The old sound system had broken about three years ago, so the team was “temporarily” using Melsness’s personal speaker. This year, the captains decided to get a new one. “The new sound system is super nice because we don’t have to worry about trying to carry a personal speaker around. It’s loud enough for the whole locker room to be filled with sound, making the environment very fun and energetic,” Peschel said.

The last major update that this trio of girls made was adding a fridge into the locker room. This allows for athletes to store all sorts of drinks and/or food in this fridge. Some athletes have very specific pregame meals/drinks, and not having a place to store these things was very limiting. “We are very grateful to be able to have a fridge in the locker room this year. We now keep a couple gallons of chocolate milk as well as water, which is super nice. It adds a professional element to the locker room and makes the space special,” Melsness said.

As talked about before, these changes were in no way mandatory, but they were very exciting updates. These changes create a happier and more fun environment for the locker room, and most importantly, a place people want to come and hang out.