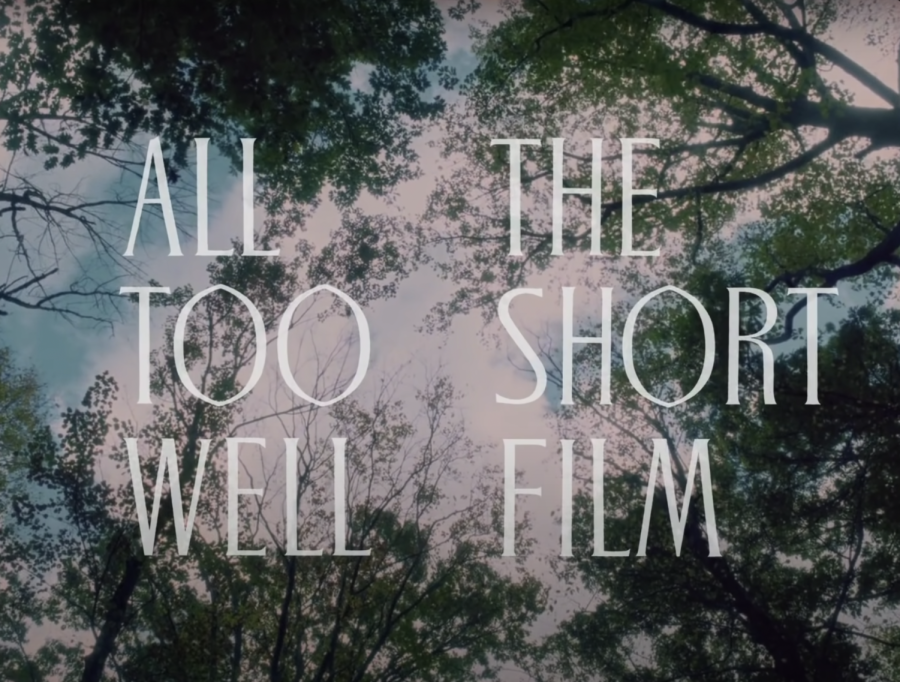 This screenshot is from the opening of Taylor Swift's All Too Well short film, available on YouTube.

On November 12, Taylor Swift released a short film accompanying her newly released song All Too Well (Ten Minute Version) (Taylor’s Version) (From the Vault). Starring Sadie Sink, Dylan O’Brien, and Taylor Swift herself, this 15-minute short film is #1 on YouTube for music and has over 45 million views.

Part One: An Upstate Escape
The first part of the film is titled “An Upstate Escape” to mirror Swift’s lyric of “Oh your sweet disposition and my wide eyed gaze / Were singin’ in the car getting lost upstate”. During this part of the film, Sink and O’Brien travel upstate together and take in the playful innocence of a fresh relationship. Piggy-back rides, autumn leaves, and glistening lake scenery set the tone for this part, and the couple’s happiness is contagious even through the screen.

Part Two: The First Crack in the Glass
The second part begins with a shot of Sink and O’Brien at a dinner party, catching up with some of O’Brien’s old friends. Sink is quiet and seems out of place, partly because she’s never met these people but also because they are all so much older than her, reflecting Swift and Gyllenhaal’s nine year age difference. Sink’s wine glass sits contrastingly untouched where everyone else’s glasses are empty, because at this time Swift was only 20 and couldn’t legally drink. The scene then switches to O’Brien on an angry phone call, clearly filled with rage about something unknown, and Sink sits in the car, confused as to why her boyfriend is reacting the way he is. Then O’Brien returns to the car and tries to reconcile with her, but things feel forced and almost awkward, but a reconciliation nonetheless.

At this point, the music cuts out and gives way to the scraping of forks on plates as Sink washes the dishes back in the kitchen. O’Brien drops his dishes in the sink and the main dialogue part of the film begins with O’Brien asking, “Why are you so pissed off?” This leads to a big fight between the two, filled with back-and-forths about how the other acted at the dinner party. The big tipping point for Sink is that O’Brien dropped her hand at the dinner table and pushed her away, which is visibly shown in the scene of the dinner party. A yelling match ensues and after a three minute fight period (out of the 15 total minutes of the film), O’Brien eventually tries to apologize, saying that he doesn’t want to fight, but ends up ultimately disregarding what Sink is saying. The music then returns and the next part begins.

Part Three: Are You Real?
Part three encompasses the pure joy that stems from relationships. Scenes of card games by the fire and dancing in the kitchen in the middle of the night reflect the happiness that came from Swift’s old relationship. At this point, the music is loud and powerful, and shows the passion that the two have for each other. It seems simply perfect.

Part Four: The Breaking Point
The fourth part begins with a clearly stressed O’Brien, sitting with his head in his hands. Sink approaches him, and as she looks into his eyes, there is a clear disconnect between them and Sink starts shaking her head in disbelief. Another fight ensues, but this one is inaudible. At this point, the bridge of the song is playing, which is arguably the most powerful part of Swift’s track. The scene then cuts to a bawling Sink collapsed on the couch. Clearly, a breakup has occurred, and Swift sings about how she was “broken like a promise” to match Sink’s emotions. After a shot of Sink typing passionately on a typewriter, it cuts to Sink alone at a party. She looks lost and wanders around as she sees everyone around her having a good time.

Then, flashbacks occur. These flashbacks match the lyrics, and when Swift sings “You who charmed my dad with self-effacing jokes / Sippin’ coffee like you were on a late-night show”, O’Brien laughs with Sink’s film father as they sit with their coffee mugs. The next scene is a flashback of Sink’s 21st birthday party, and she blows out her candles as Swift sings “But then he watched me watch the front door all night, willing you to come / And he said ‘It’s supposed to be fun, turning twenty-one’”.

Part Five: The Reeling
Part five is short: only about 30 seconds of the whole 15-minute film. Multiple pans of Sink sitting emotionless make up this part, and there are shots of her laying in bed, sitting on the floor, and crying as well. At this point in the song, the music quiets down, and emptiness of the music is reflected through Sink.

Part Six: The Remembering
Part six is another series of flashbacks, but this time, they are seen through O’Brien’s eyes. Shots of walks in the woods, card games in front of the fireplace, and dance parties flash back-and-forth to shots of O’Brien walking alone, clearly thinking back to these times. The music ramps up again to match the passionate energy of their relationship that once was.

Part Seven: Thirteen Years Gone
At this point in the song, there is a definitive shift that marks the beginning of Swift’s song slowly coming to a close. The seventh part of the film shows an older red-haired girl getting ready for an event, putting on jewelry and heading out the door, but her face is never shown. The red-haired girl then arrives at a book signing, and the camera pans the multiple books laid on the table titled “All Too Well”. It is clear that the red-haired girl is the author of the book “All Too Well”, and the camera slowly pans around to reveal the girl’s face, and she is Taylor Swift herself. Swift reads aloud her book, matching the book to the lyrics of the song, and multiple shots of a crying audience show that her book is about her old tragic relationship. Finally, after a few slow pans of Swift reading at her book signing, the film ends with a final scene of the book signing, but it is shot through the window outside. As the camera zooms out, taking the focus off Swift, there is someone who was watching through the window: O’Brien, wearing Swift’s red scarf. He walks out of the screen as snow falls to the ground and the credits begin.

Overall, I absolutely loved this short film. I think that it took all of the ups and downs of Swift’s incredible song, showcased them in real life, and it was executed perfectly. There were also plenty of plot twists that I didn’t see coming, especially when Swift assumed Sink’s role in the film. I keep returning back to YouTube to watch this film over and over again. Sink, O’Brien, and Swift were all fantastic actors and I have absolutely no complaints whatsoever. For Taylor Swift, Sadie Sink, and Dylan O’Brien fans alike, I highly recommend giving this short film a watch.