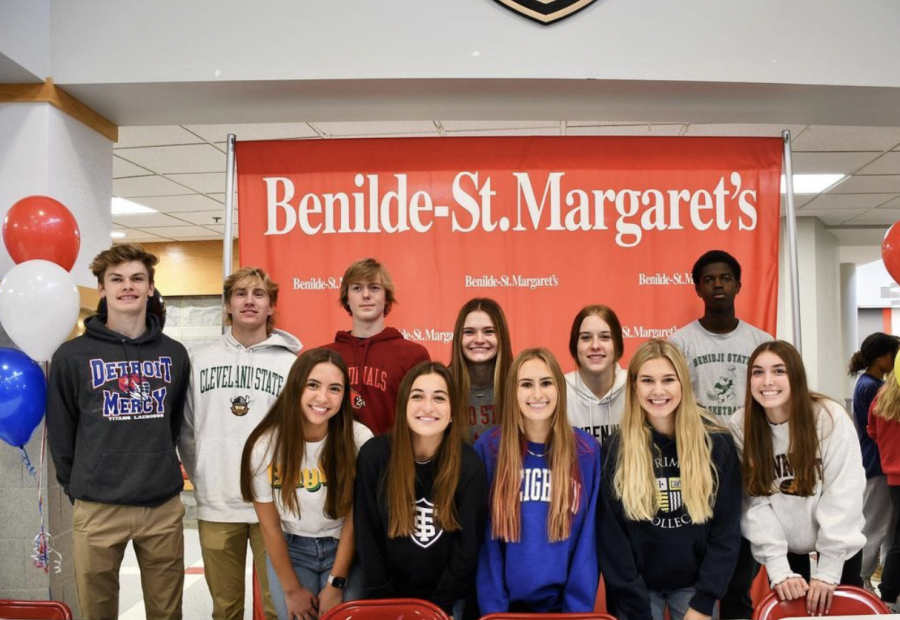 The 11 BSM seniors signed their letters of Intent on November 11th.

Emma Peschel, a four-year varsity hockey player, has decided to sign with The Ohio State University––an institution that will allow her to play Division I hockey while also getting a good education. A big part of Peschel’s decision was committing to a school that would have been a good academic fit regardless of hockey being part of the picture. “ [I] ultimately decided on a school that I would go to without having hockey and I felt that Ohio State was the best fit,” Peschel said.

The commitment process is no easy task, as it involves a great deal of back and forth between multiple coaches and schools, while still trying to keep as many options open as possible. “I went through the whole process of talking to different coaches from different teams and narrowing down my choices,” Peschel said.

Peschel verbally committed the summer going into junior year after going on her official visit, which further reassured her decision. “Meeting some of the teammates that I would be playing with really solidified my decision,” Peschel said.

Above all, the commitment process looks different for every student-athlete. There are many factors to consider when making as big of a decision as a four year commitment, so using your time wisely over the four years of high school to one’s advantage is key. “I obviously committed pretty late but I was waiting for the right match and after touring St Thomas this summer I loved the coaches and the campus so it felt like the right match,” hockey player Mary Zavoral said.

Justin Dalum, who is committed to Cleveland State for lacrosse, is looking forward to his next chapter as a student-athlete, and the new opportunities it will present him with. “I am most definitely looking forward to meeting new people and playing with a new lacrosse team in college,” Dalum said.