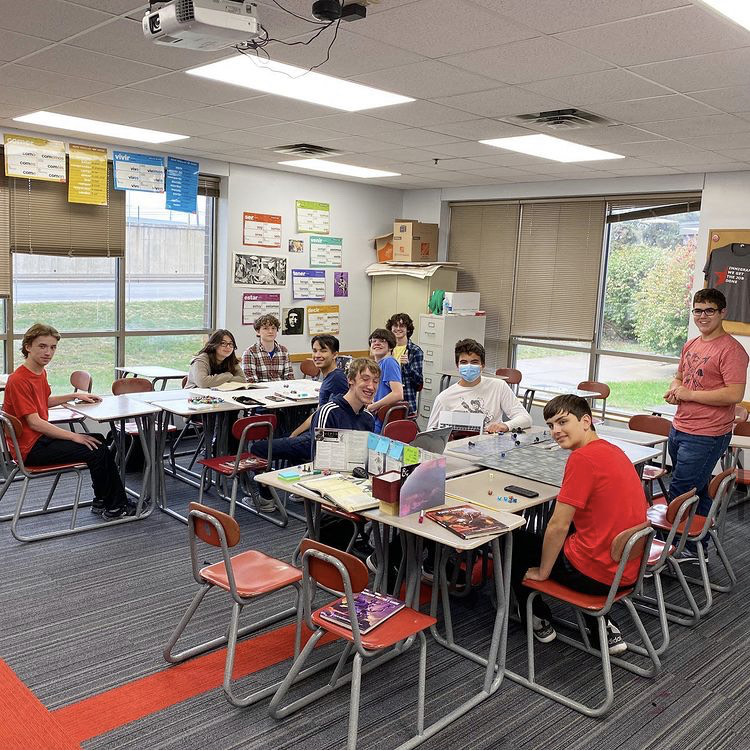 The members of the Dungeons and Dragons club at their weekly meeting.

If you don’t know what Dungeons and Dragons is, it is a board game with the premise of roleplaying and fantasy in worlds of swords and sorcery. The original game came out in 1974, and since then there have been four more editions, as well as the release of movies and video games.

Starting the club was not easy, as it did take a few stages to get to where they are now. “The club came about as an idea from a teacher Ms. Bevington. She had approached me and some friends in homeroom about creating a DnD [Dungeons and Dragons] club because she knew some students that were interested in being in a club and that we already had a DnD [Dungeons and Dragons] experience,” club co-founder Max Del Ghingaro said.

Forming the club also took a lot of help from others outside of the club itself. “Robbie DeMars and Sam Larkin approached the school about making a club. The school agreed and organizing started with Cami Dalstrom. We gathered people who were interested and created a discord server. We took on Profe Luna as the teacher sponsor, and then we took a few more weeks to organize. Our first actual session on October 13th,” Del Ghingaro said.

Like many clubs at BSM, the Dungeons and Dragons club is a great opportunity to make friends and get to know classmates you may not have the chance to interact with otherwise. “My favorite thing about the game and the club as a whole is just the ability to be yourself and express yourself. I love being able to be a character that isn’t myself because it forces the player to step out of their comfort zone and this can lead to getting to know the people you play with,” junior David Petit said.

One of the most unique parts about the club is that it’s mostly student-run without the involvement of teachers and staff. “Truthfully, teachers don’t have to do much, just reserve the cube for Wednesday and stay in the cube to supervise the club. But if a teacher is interested, they are more than welcome to join us in playing DnD [Dungeons and Dragons],” Del Ghingaro said.

The Dungeons and Dragons club is one of the smaller clubs at BSM. “On a day with a larger group, we usually have around 10-12 people. Most of the time, however, we don’t have these numbers, as some people are just busy, so on average I’d say we get about 8-10 people,” Petit said.

The club is open to anyone and everyone who is interested in joining this new club. “Sign up is pretty simple, just email me, Robbie DeMars, or Profe Luna, and we will send you a link to the club discord, then just show up on Wednesdays right after school at the cube from 2:30 to 5:00. Just make sure you join the discord because that is the main way members communicate,” Del Ghingaro said.