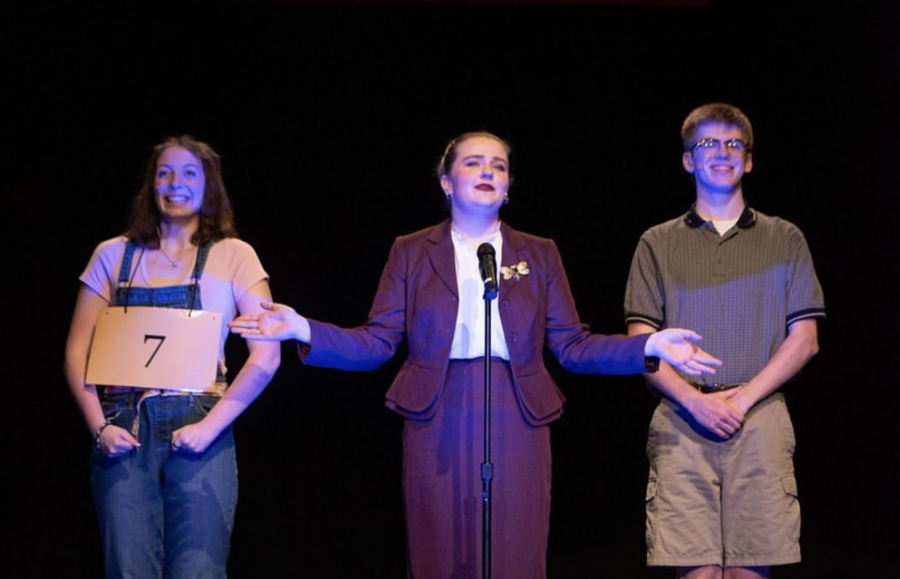 Courtesy of BSM Marketing and Communications

The BSM Drama Department strikes again, this time with The 25th Annual Putnam County Spelling Bee! This fall musical, performed entirely by BSM students, was showcased four times this past weekend––three night performances and a matinee to close out the weekend.

For those unfamiliar with the musical, The 25th Annual Putnam County Spelling Bee originally aired on Broadway in 2005. The premise of the musical, very briefly, is centered around the idea that six awkward spelling champions learn that winning (and losing) isn’t everything. While BSM is on a much smaller scale than Broadway, the BSM drama department came together, and pulled off the musical in just about seven weeks. “We started September 13th, had auditions, then rehearsed, had tech, and performed four times in seven weeks,” junior Greta Hall, who played Logainne Schwartz and Grubenierre, said.

This musical proved to be fun for more reasons than one. For starters, the musical incorporated audience participation. Four audience members got to make their big stage debuts by participating in the spelling bee with the cast for as long as their spelling skills allowed them. “I loved it because it was very unpredictable and we couldn’t exactly study what we we’re going to say to them [audience members]. Ms. Dominguez came on Friday and made it the longest of any audience member. Mr. Epler and Mrs. Van Cleve also came up, and it was really fun because you could see people you know come on stage, but you couldn’t act like you know them, which kept us in character and made it feel more real,” Hall said.

Along with audience participation, the incorporation of an abundant number of songs, both solo and group, kept the musical lively and engaging for the audience. Over the course of the two hour production, around 20 songs were played/sung. Assisted by former choir teacher Nancy Stockhouse, as well as two other musicians, the many songs throughout the musical were accompanied by a talented band trio. The band not only sounded great, but were able to read the cues of the cast much better than a pre-recorded audio could’ve. “It’s really helpful because of the unpredictability of it. For example, they can stop playing when they need to, and then restart when the time is right; they accommodate to what we need in the show,” Hall said.

No two characters encompassed the same personality, which made for a diverse and unpredictable two hours. From the costumes, the sets, the lighting, and the props, the BSM drama department did not miss or skimp out on any details. “We went kind of off of the costumes they did on Broadway, so like the Catholic girl costume, suits, and capes were all taken from the influence of Broadway,” Hall said.

The small cast grew close during their time together, and their hard work was more than evident this past weekend throughout their four performances. “I loved it [the musical]. It was a super small cast, so I knew it would be harder to get in, and it was definitely a lot of work, but a lot of fun,” Hall said.