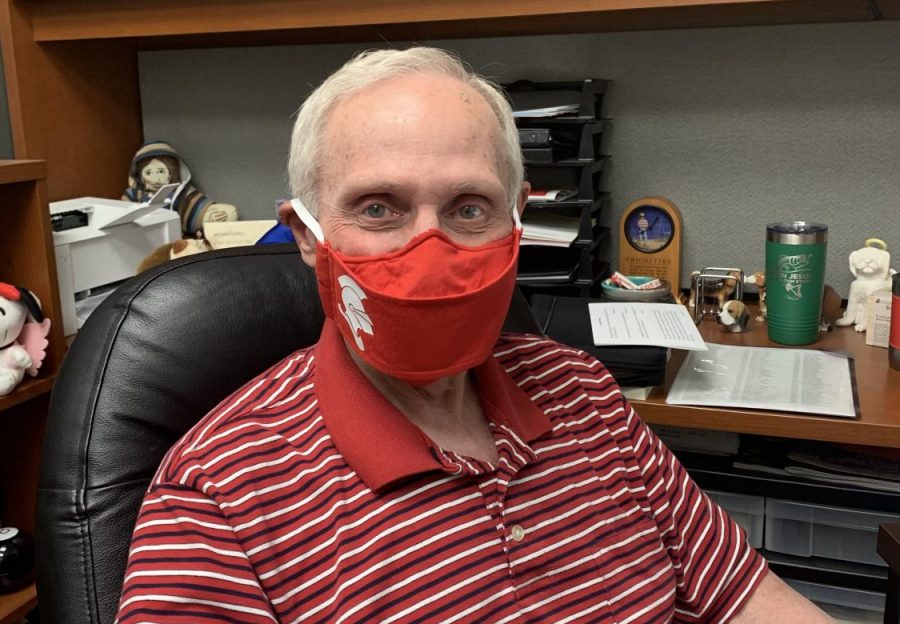 Where do you want to be in 5 years?
“I hope and pray I’ll still be [at BSM] because I love very much what I do and I love this place. It is my home and my family, so in five years I’m hoping that I will be here.”

What talent do you find unique or important to you?
“My singing, which I don’t get to do that often. It’s important to me because I used to sing so much. I would sing at a bunch of weddings, sometimes 200-300 weddings a year which I don’t do anymore, simply because I don’t have time. So, now, I am very limited, and there’s two times that I really love that I’m able to do singing, and that’s at the end of the year when I am able to sing “Forever Young” for seniors at Bachelorette, and when I’m able to sing “Friends” at the closing school mass. I think that gift of my voice is something that I love sharing and don’t get to share that often, but those two special times mean so much to me.”

Who is your hero, and why?
“There are two people that stand out in my mind as my mentors. They’re both people who were at one time in administration here at school: Father Arnold Weber, a Benedictine who was actually the first president of the school back in the seventies and eighties, he was my mentor, and Sister Marie Herbert. Sister Marie Herbert was principal at St. Margaret’s Academy, and, when the schools merged, she became the principal here at [Benilde-St. Margaret’s], and she hired me. Not just for that reason is she my hero, but the two of them really shaped me during those early days and I learned so much from the two of them because this was my first job here at BSM back in 1975. The two of them really impressed upon me what my role should be.”

What is an item you bring with you everywhere, besides a cell phone?
“My wallet: I carry it everywhere with me.”

What makes you laugh?
“My dog does. My dog is very special to me because she was a gift from the class of 2006 which is Ms. [Betsy] VanCleve and Mr. [Sam] Fulco’s class and she was seven weeks old when they gave her to me—a little beagle. They even pre-named her JC, because they thought, as campus minister, I should have a dog with the initials JC. She definitely makes me laugh, even though she’s 15 years old, she still does some crazy things. I think sometimes I laugh at myself because I don’t think we can take ourselves too seriously so there are times where I sit back and I go ‘why did I ever do that? Why did I say that?’ More than often, I find myself laughing at myself.”

Are you someone that wants someone to spoil the end of a show or movie for you?
“No. I do not like it when the endings are spoiled for me. In fact, I am a big fan of NCIS and the season finally was last night, so a good friend of mine called a little after eight and said ‘ok, we [have to] talk about NCIS, do you know what happened when this—’ and I went ‘hold it. I’m as baseball and lacrosse do not tell me. I’m DVR-ing it, do not tell me what happened.’ I don’t mind it for games and stuff because, eventually, I’m going to hear a score. Especially if it’s a TV series or movie I’m really into, I don’t want it to be spoiled.”

What is your least favorite fast-food chain? What fast-food chain is your favorite?
“I’m trying not to do fast food, but with my lifestyle, since I’m just at home by myself I hate cooking. I hate making things just for one person, so I end up doing fast food even when I don’t really like to do it that often. I think my favorite, even though I don’t go there that often, I’d say McDonald’s: especially their fries. I think they have the best fries in the world. My least favorite—honestly I don’t think I have a least favorite fast food. I take that back. White Castle. White Castle just kind of stays with you forever.”