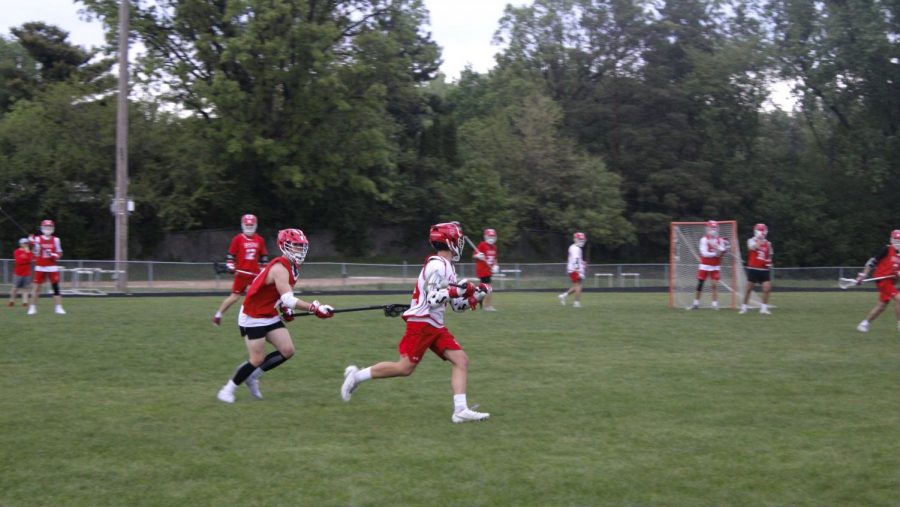 The Red Knights sprint after one another at practice.

The Benilde-St. Margaret’s boys’ lacrosse team has had a pretty strong season so far, having only one loss. In fact, MN Lacross Hub ranked them as the number one team in the state this past week.

The Red Knights have a very skilled line-up on the field. Not only do they have eleven seniors, but the underclassmen also play a big role on the team as well. “The starting attack of [Matthew] Dowden, [Cam] Gelling, and [Carson] Brandt is a goalie’s worst nightmare, our starting midfield of [Patrick] Burns, [Jackson] Leischow and [Sky] Rold is the best in the state, our defense with guys like [Braxton] Bogen, [Mason] Wortleman, [Caio] Stephens, [Gordy] Johnson, [Sam] Pikul, and [Matthew] Kroll have been stellar, our starting goalie [Justin] Dalum is on fire right now, and [Drew] Nylander is arguably the best faceoff guy in the league,” senior captain Dowden said.

Most teams have a solid starting lineup, but they don’t always have skilled subs. The Red Knights are fortunate to not only have a wide variety of skills on the team. “[Jonny] Schieffer, [Finn] Murphy, [Sam] Decker, [Brad] Little, [Gus] Bell, [Axel] Esco, and [Kieren] Wickner give us depth that other teams simply don’t have and can’t compete with. And we also have a ton of incredible younger players coming up,” Dowden said.

It’s not all about the skill on the field, though. The connection off the field also plays a huge part in a good team. This year, the boys have a connection throughout the whole team, which definitely contributes to their success. “I haven’t seen [a tight bond] between senior and freshman before,” senior captain Braxton Bogen said.

The BSM lacrosse team has faced up against the Prior Lake Lakers the last two years in the championship state game. This year, the Red Knights finished off that game with the score of 13-6. “Beating Prior Lake [is my favorite memory] because we have lost to them in the past,” senior captain Jackson Leischow said.

With the lack of a season last year, it’s been hard to predict what this season will look like for a senior. “[Senior year] is turning out. It’s been a fun season with the team, even though I’ve been injured a lot,” senior Gordy Johnson said.

With only four regular season games, the boys are hoping to play three more section games and three state games. After playing in the state championship game these past two seasons, the boys’ lacrosse team has big goals of returning and taking home the title. “We all wanna wear those first-place medals around our neck at the state championship,” Bogen said.

Next up, the boys will be playing against St. Thomas Academy on Saturday, May 22.