Boys’ lacrosse is making a comeback after two years of downtime 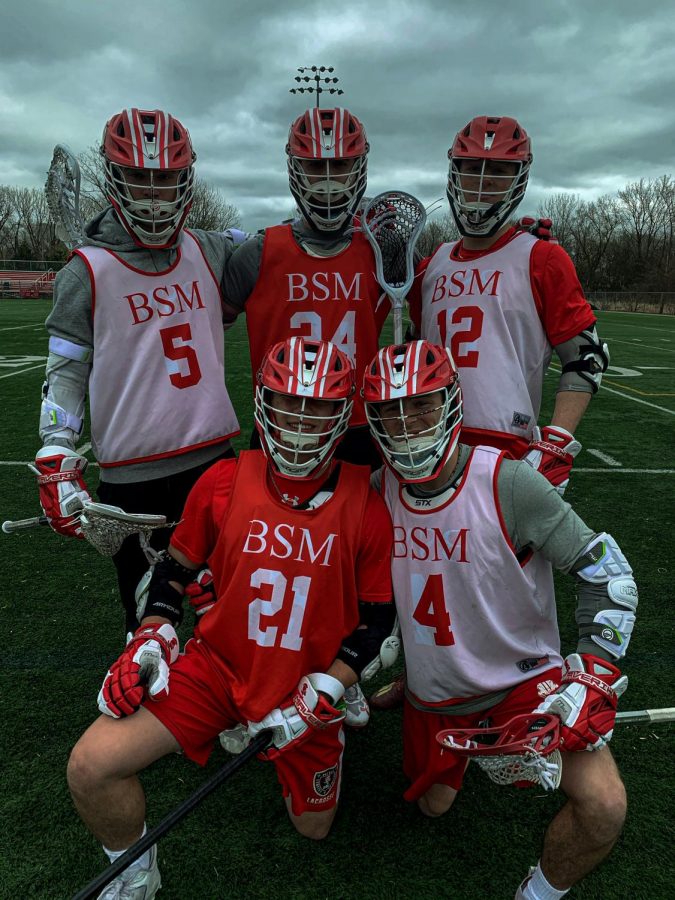 Boys' lacrosse players pose on the field midway through preparation for their first game of the 2021 season.

After 21 long months without high school lacrosse, the Benilde-St. Margaret’s Boys Lacrosse team has finally gotten the chance to play together again. The boys are ready to get back out on the field and compete for the State title once again.

The team’s last game played was the State Championship on June 15, 2019 against Prior Lake, who defeated them. BSM boys’ lacrosse has been a very successful program––making an appearance in every Minnesota State Lacrosse Championship since 2017––but has never brought home the title. BSM boys’ lacrosse is eager to get to play Prior Lake again on May 1. “I am excited to play Prior Lake because they have always been a very well-coached team and very athletic. I look forward to feeling the pressure of it and redeeming ourselves,” freshman attacker Sky Rold said.

Since it has been two years since their last season, the team has changed quite drastically, but the intensity and dynamic remains the same. “I’m most looking forward to enjoying the journey, good weather, and companionship of the team and brotherhood of it all while playing for the seniors,” Rold said.

A commonality among the BSM boys’ lacrosse program is the concept of playing for each other to accomplish goals that a single person would not be able to do, especially in regards to the seniors.  “I’m definitely excited to play for the seniors. We had a discussion in the beginning of the season about it. They are a good group of guys to play with, talk to, and hang out with,” freshman Adam Backman said.

The captains also play a significant role in the program. They have earned respect from their teammates after years of commitment to the game. “I think that our captains are great; the team wouldn’t be as united as we are without them. They teach you a lot of great lessons throughout the journey and really make you feel welcomed, especially being a first year,” eighth grade attacker Dylan Popehn said.

Such leadership traits have been inherited through the lacrosse coaching staff, who have the most respect of all. “The coaches are all amazing. Coach Horn talks about how the coaching staff cares for every player throughout the program, and you can really tell through how they push you and what they do to help you out,” Popehn said.

While the players are ready to get back out on the field, they are also wary to start playing again. “I have never played a game like this before; it’s my first year of high school, first high school lacrosse season. Living up to the Benilde standard of lacrosse is a little intimidating, but it keeps getting easier and easier to play with all of them,” Backman said.

Nonetheless, the boys are eager to get the chance to play the game they love. The underclassmen have had a great time so far getting to know the BSM lacrosse team and agree the intensity has stood out to them the most so far. “The high intensity and playing for every single person on the team is great. We even added a tradition at the end of each practice where in the last five minutes everyone gives 110% and goes as hard as we can,” Rold said.

The team won its first game against Lakeville South 14-5 on Saturday, April 17.