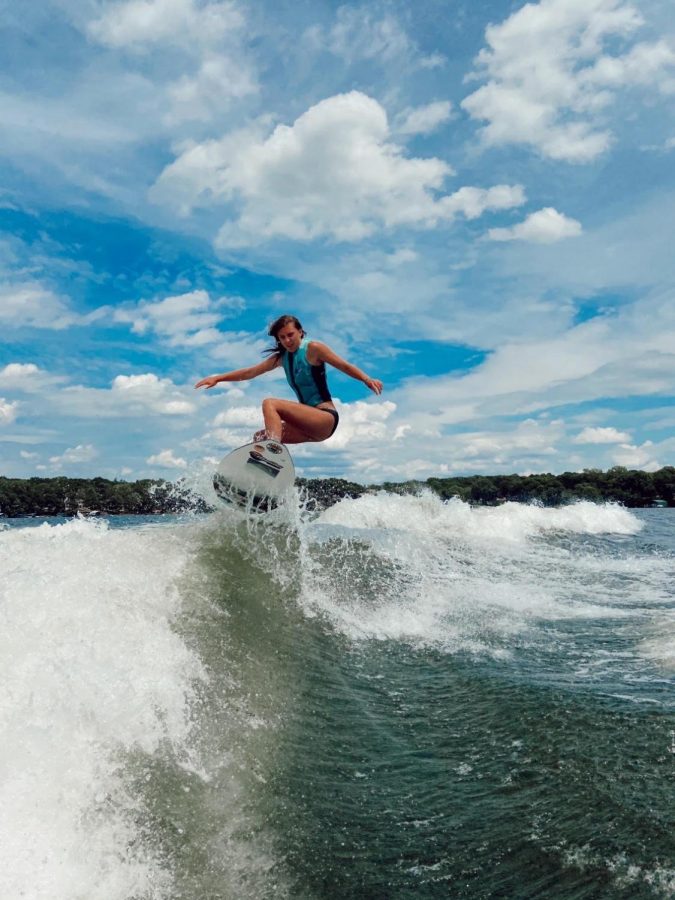 Senior Dani Mergen has been behind the boat since she was five years old, but started wake surfing when she was eight years old. Dani spends her time doing this behind her Malibu Waksetter 23 LSV.

Dani has come a long way in her wake surfing career. She was invited and competed in the 2020 World Wake Surfing Championships, where only the top surfers in each division are invited. In the Amateur Women’s Skim Division she placed in 6th and was ranked 8th in the world by the end of the season. These accomplishments are leading her to bigger and better things. “I was moved up to the Outlaw Women’s Skim Division (the level below becoming pro) which is the division that I will compete in this year,” Mergen said.

Throughout it all Mergen’s dad has been her number one supporter and is also a wake surfer himself. In fact, Dani and him both were invited to compete in the 2020 World Wake Surfing Championships, just in different divisions. “Wake surfing has always been a family sport for us and my dad has been my number one supporter, so the fact we both were invited to the same championship was very special to me,” Mergen said.

Wake surfing isn’t just gliding on a wave behind the boat, it also includes tricks, such as spinning and shuv-it’s. “I was super excited when I landed my first shuv-it, which is done by rotating the board in the air without rotating your body,” Mergen said.

Though you may only hear the good things every sport has their dangers and setbacks. “I did have a wake surfing incident where the board hit me in the face and at the time I had braces so the board knocked off some of my brackets,” Mergen said.

For people who want to get into wake surfing, Mergen has some tips. “The first thing I would recommend is to make sure the boat you are riding behind has a dialed in wave. Malibu Boats have a great long and clean wave to surf behind. I would also recommend finding a longer board so that it is easier to catch the wake. As you become more proficient and more comfortable behind the boat you would then want to move to a smaller size board. Finally I would just say be patient with yourself and as you get up on the board everything’s little movements,” Mergen said.