The college football playoff system is flawed. Here’s how to fix it. 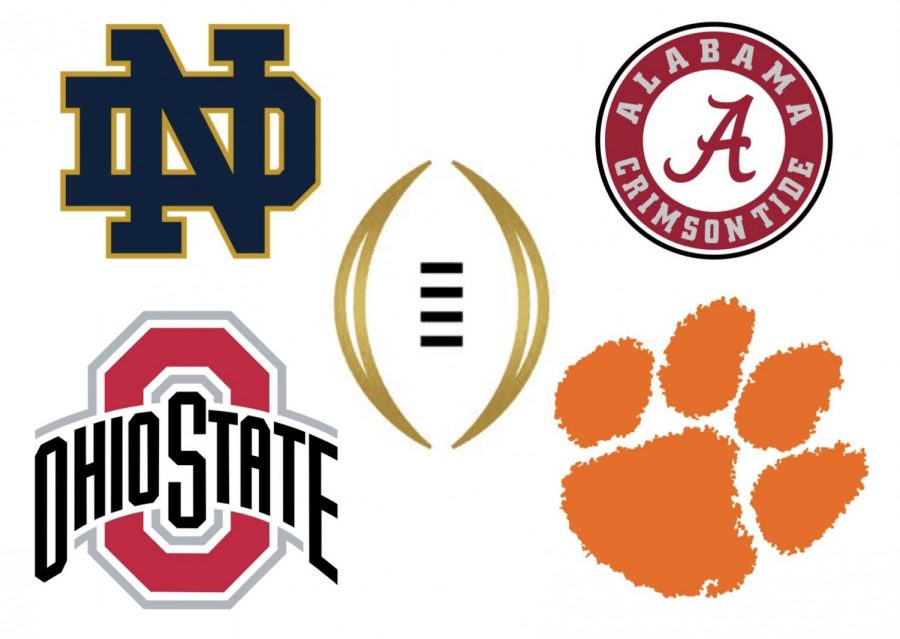 A look at the boring, repetitive matchups of the 2020-2021 College Football Playoff.

The College Football Playoff format is miserably broken. This has been apparent for several years, but this year has served as the most blatant example. The rich have gotten richer, and the poor stay poor. The immense lack of variation and excitement present in the current format is harming the popularity of the sport. In 2019, college football stadium attendance hit a 22 year low. Something must be done to reverse this decline or the sport is in jeopardy of falling off a cliff and programs losing funding.

The most cited issue with the four-team playoff format is the lack of variety. There are four mainstays in this playoff format in Alabama, Ohio State, Oklahoma, and Clemson, and a few alternates in Notre Dame, LSU and Georgia. In the seven years of the playoff and 28 total selections, only four other teams have ever been selected. This year’s selections were… drum roll… Alabama, Clemson, Ohio State, and Notre Dame. The first round consisted of the classic beatdowns seen yearly: seldom are semifinal games competitive. Alabama effortlessly glided over Notre Dame and Ohio State walloped Clemson, only the latter of which was a surprise. In the championship, thoughts that the game would be close were exposed as wishful.

The 2021 College Football Playoff Championship was the purest example of Alabama’s utter domination of the college football world. They coasted to a 52-24 blowout over Ohio State, the team presumed to be their closest match. Although one must appreciate the level of excellence that Alabama exhibits in their play, for the rest of college football, their reign is injurious. The only way to challenge Alabama’s claim to the throne is to expand their field of challengers.

Expanding the playoff to eight teams would be beneficial on several levels. First, teams who are good enough to compete and beat the top 4 but have a less than pristine record would be able to make it. This would especially help in that great teams who compete in difficult conferences like the SEC but are unable to escape their cannibalistic schedule unscathed would no longer be excluded. This year’s Texas A&M and Florida teams were likely better than 2 of the playoff teams but finished with 1 and 3 losses respectively, which proved too many for the playoff selection committee.

Second, teams who do not compete in a top conference but win each of their games in an impressive fashion would be included. There have been 2 examples of these teams who finished the regular season undefeated but were left out due to their strength of schedule: UCF in 2017 and Cincinnati this year. Both compete in the American conference, which, although not considered one of the “Power Five,” is certainly tough and has its share of top 25 teams. In their bowl games, UCF beat SEC powerhouse Auburn and Cincinnati narrowly lost to fellow SEC juggernaut Georgia at the last second. Even if teams like 2017 UCF and Cincinnati were unable to win games in an expanded playoff, it would add a dimension to the sport similar to “Cinderella” teams in the NCAA basketball tournament.

Third, expanding the playoff would raise the amount of teams able to recruit on the level of the top programs. The four-team playoff has made it so that teams not named Clemson, Alabama, Ohio State, and Oklahoma are comparatively irrelevant in the national scene. This results in a grossly disproportionate amount of top recruits attending these schools. By expanding the playoff, twice the number of programs would be able to market themselves as playoff teams to recruits, spreading the wealth more evenly. Although Alabama coach Nick Saban has played a large role in their success over the years, he does not actually take the field for the team. Instead, Alabama had three of the top 5 finishers in the Heisman voting on the field. It is the players that truly dictate a team’s success, and with this level of imbalance in talent, the performance of teams will follow suit. Anything the NCAA can do to promote the spreading of top recruits will be beneficial to college football.