Is George Wolfe smarter than an eighth grader? 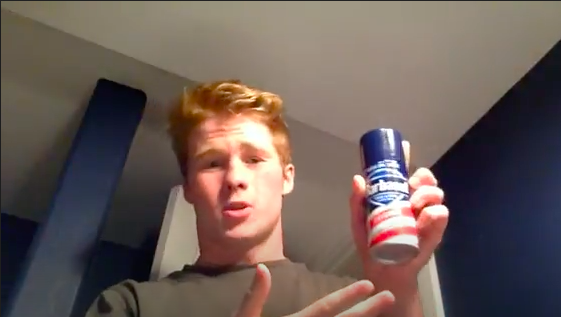 George Wolfe presents one of the key ingredients to a good, close shave: shaving cream.

Every now and then, a high school student will be doing academic work and struggle with a topic, realizing that they had possessed a better understanding of it years ago. BSM senior George Wolfe has experienced this feeling numerous times, making him wonder truly how much knowledge he has gained during his high school years. So he set out to find out, emailing BSM junior high teachers whose very classrooms he once occupied, asking for an assignment to complete in order to compare himself to the eighth graders.

Although many of these teachers were willing to help him with this, English teacher Mr. Greg Hoemke’s proposed assignment most piqued Wolfe’s interest. It was to make a demonstration speech video of a task of a student’s choosing. It is fitting that Wolfe’s task would have to do with something so many students struggle with. “Speaking skills are one thing we put more emphasis on than ever,” Hoemke said.

Wolfe brainstormed topics on which to present, questioning whether they would be of use to his audience. He decided to present a demonstration on how to shave. He wrote, rehearsed, and filmed his video, which included Wolfe masterfully shaving his own face.

Eventually the fateful day came when the eighth grade advanced English class was to watch the videos and vote on which they felt was best. Although Wolfe was unable to be there in person, Mr. Hoemke filled him in on the results of the voting. Unfortunately, Wolfe was given the poor fortune of being placed in a group with a girl who demonstrated how to throw knives, which some may contest is marginally more interesting than shaving, though far more dangerous. However, in the end, Wolfe’s conqueror was not the knife thrower, but instead, a chess player.

Despite the embarrassment of being soundly defeated by a group of eighth graders in the voting portion of the project, Wolfe fared far better in the grading. Although his lack of a conclusion would rob him of a perfect score, the strength of other elements of Wolfe’s presentation warranted him a 95/100. “The students of the class agreed that [George’s presentation was] strong in all the categories assessed: Poise, Voice, Life, Eye-contact, Gestures, and Speed. They felt it was well written, interesting, fun, and produced well. Their only critique, and I concur, was that it could have used a more developed conclusion,” Hoemke said.

Due to his failure to advance to the final round of the competition and to earn a perfect score, it cannot veritably be said that George Wolfe is smarter than an eighth grader. However, it may come as some consolation that he did well on the project, and developed his public-speaking skills in the process.