The Queen’s Gambit is a Compelling and Exciting New Show 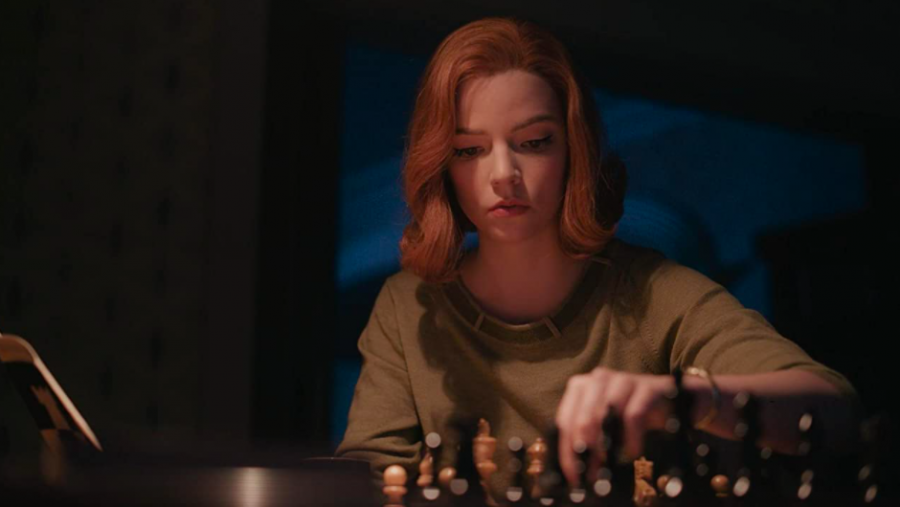 The Queen's Gambit, Netflix, Fair Use

Netflix’s compelling new series, The Queen’s Gambit, was watched by a record-setting sixty-two million households after its October 23rd release. Based on the novel by Walter Tevis, the main character Beth, played by Anya Taylor-Joy, is an orphaned chess player struggling with addiction as she embarks on a journey to become the best chess player in the world.

Set in the 1950s, Taylor-Joy plays a young, intelligent girl by the name of Beth Harmon. At age nine, Beth’s mom takes her life by driving into an oncoming vehicle. Beth, who was in the car, is unscathed, but left orphaned. She is taken to an orphanage, and there, she learns to play chess with the janitor in the basement. Beth easily takes up chess and plays like no one has ever seen before, especially at the young age of nine. When she eventually gets adopted at age fifteen, she starts to enter chess tournaments and win them easily, shocking her competitors. Beth grows up and gains fame as she continues to win chess tournaments all over the continent. The only competitor Beth ever fears is Borgov, a chess player from the Soviet Union. After losing twice to Borgov in both Mexico City and Paris, Beth eventually journeys to the Soviet Union, where she defeats Borgov and becomes the best chess player in the world.

The Queen’s Gambit shows not only Beth’s chess battles, but also her battles with addiction. In the orphanage that Beth enters at age nine, every girl is given their “vitamins”, which are actually tranquilizers. Beth starts to save these pills and take multiple of them at night, which causes her to visualize a three-dimensional chess board that helps her to work out new chess strategies. At the orphanage, Beth becomes addicted to these pills and starts taking as many as she can. She gets over her addiction, but once she’s adopted, her adoptive mother starts to take those same pills and Beth becomes addicted once again. As Beth’s chess career grows more stressful, she turns to alcohol to try to relieve some of that pressure. Beth hits her lowest point as she copes with her adoptive mother’s death, numbing her pain with alcohol. This causes her to lose crucial matches in her chess career. Eventually, with the help of her friends, Beth overcomes these addictions and is able to become the worldwide chess champion.

Feminism is an important point in the show. Because chess was considered a boy’s game in the 50’s and 60’s, it was rare to see a girl like Beth playing so well. Many of Beth’s competitors are intimidated by her gender, and it throws them off a little. But Beth doesn’t let that get to her. As Beth gains more fame, she gets interviewed by many magazines and newspapers. She is constantly asked about what it is like being around all those boys, and Beth simply responds that it doesn’t shake her one bit.

One complaint I have about this show is the lack of episodes. I’ve found that the most successful TV shows usually have about twenty episodes per season. However, The Queen’s Gambit only has seven episodes. Although I found it remarkable how well done the show was despite the small amount of episodes, I wish there were more, because then it would feel like an average TV series and not just a few episodes.

I was hooked minutes into this exciting series, and I can safely say that The Queen’s Gambit is one of my favorite TV shows I’ve ever watched. The plot was compelling and drew you in right from the beginning, and it was hard to stop watching once I started. This can also be said for many other watchers: within the first three weeks of its release, over sixty-two million households watched The Queen’s Gambit, making it Netflix’s biggest limited scripted series to date.