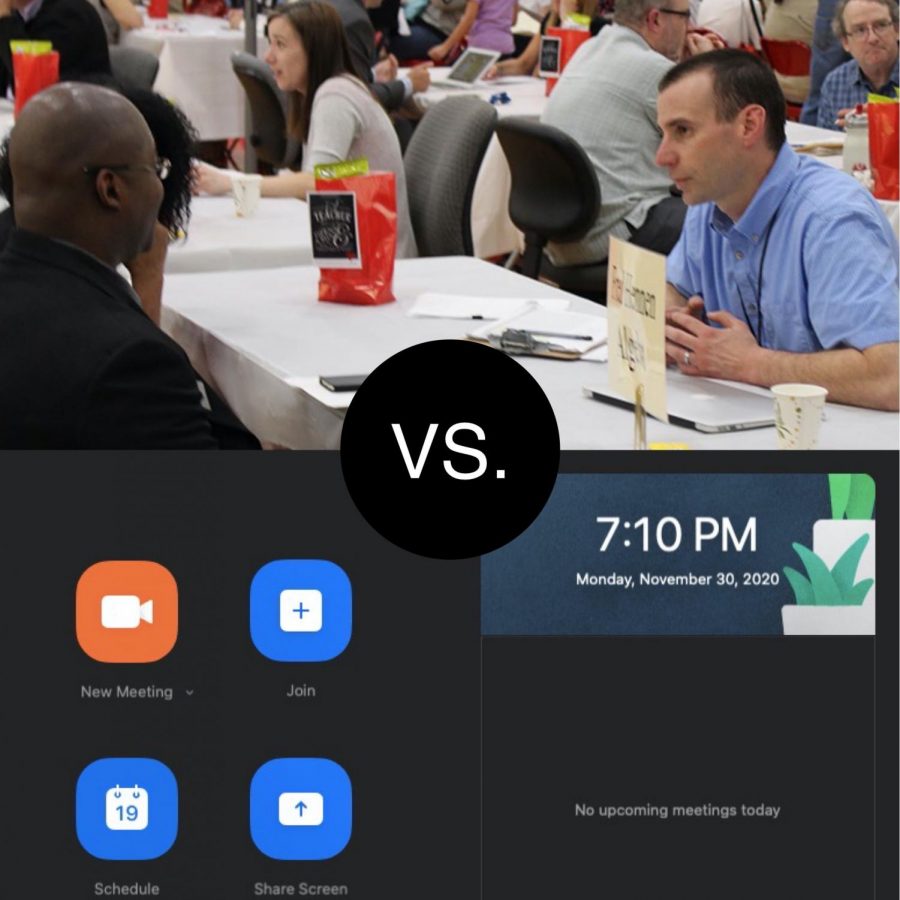 The traditional method of parent-teacher conferences underwent changes due to this year's special circumstances.

The newly implemented quarter system that BSM has adopted this year has led to more changes than one. One such change is that parent-teacher conferences will now occur four times this year as opposed to twice, which has been the case in non-pandemic years. Additionally, while parents are limited to do these conferences from the comfort of their homes, teachers have the option to do them either from campus or their homes.

Although there are both benefits and consequences to meeting with parents and teachers more frequently, there doesn’t seem to be a general consensus, rather everyone involved has a different point of view. “I was a little leery in the beginning, but after experiencing it [virtual conferences] during the first quarter…I actually prefer it over in person conferences,” Anne Weber, BSM parent, said.

Spanish teacher Mary Murray shared a pretty similar perspective. “At first, I was nervous, but once I did a few, I was actually very happy with the virtual format. I was able to do conferences more efficiently with the time limits,” Murray said.

But that optimistic stance isn’t necessarily embodied by all parents and teachers. Parent Meghan McGrann has two BSM students–one freshman and one junior. McGrann strongly prefers in person conferences over virtual conferences. “As a parent, I would far prefer doing conferences in person rather than zoom, but given the pandemic, that is just not smart nor possible,” McGrann said.

McGrann recognizes the circumstances that stand in the way of in-person conferences, but she feels as if crucial benefits are thrown out of the picture when conferences are moved online. “I feel that there is a lot missed when doing things virtually- cues that are missed, body language and the ability to really ‘connect’ while sitting across a table,” McGrann said.

With the school year being split up into four quarters and the hybrid and all virtual learning models put in place this year, one might think it would be challenging to have parent-teacher conferences so early on in each quarter, but this doesn’t seem to affect Murray too heavily. “It’s not more difficult because of the quarter schedule or the shortened time in my opinion,” Murray said.

For McGrann it doesn’t seem like first quarter conferences were all that long ago, though she recognizes the need to uphold the schedule of the conferences. “It feels like we just had conferences, but with the change in classes and teachers, it is important to continue the same mid-quarter schedule,” McGrann said.

Along with that, some teachers may find it difficult to build solid foundations within their student-teacher relationships well enough by the time conferences roll around, but again Murray doesn’t seem personally too phased by the changes. “I have had quite a few of my students in previous years by teaching Spanish IV one year and then Spanish V the next or AP Spanish Language and then AP Spanish Literature the next. For me, it wasn’t hard to get to know my new students even with the new schedule,” Murray said.

For another teacher, the quarter block schedule has helped them in terms of getting to know their students. “My schedule this semester is set up in such a way that the students are working on their work independently for much of the class time. Due to this, I spend most of my time at school talking to and getting to know the students. With this set up, I think I have gotten to know them really well in a short period of time,” math teacher John Groess said.

Regardless of this particular year being filled with great uncertainty, Weber, Murray, McGrann, and Groess all agree that parent teacher conferences are always valuable. “I think [conferences] are more important than ever, but are probably also harder for the teachers than ever,” Weber said.

With the newfound flexibility this year’s many adjustments present, on both ends, parent-teacher conferences are able to be done from the comfort of one’s home. This is beneficial for both the parents and the teachers.“I don’t have to navigate the hallways or lurk outside the door waiting for another conference to be finished. It’s also a lot more private compared to the open house model because you don’t have to sit in lines or worry about other people overhearing your conversations,” Weber said.

Being home also offers additional advantages to teachers. “I’m able to run to the restroom and get a drink or a snack more easily. [In addition] I also liked meeting the parents/guardians in their homes. It felt a little more like just a conversation, rather than a conference,” Murray said.

The five minute time window for each conference has made a big impact on the teachers in terms of logistics. “I think the scheduling times are much better and can keep everyone organized,” Groess said.

For all the change this year has presented, Weber, Murray, McGrann, and Groess are thankful for the chance to still have parent-teacher conferences, even if those look a little different then they may have in former years. Despite all the change that has occurred this year, Murray finds parent-teacher conferences to still be an effective style of communication. “[Conferences provide a] good chance to touch base,” Murray said.

With everything taken into consideration this year, not everyone is going to end up fully pleased with the outcome, but all can agree that parent-teacher conferences are very valuable. “I am certainly happy that BSM is offering virtual conferences.  Something is better than nothing,” McGrann said.

Although it is important to note that Anne Weber is the author’s mother, the Knight Errant found no discernible conflict of interest evident in her statements.