As BSM issues its new plan for diversity, equity, and inclusion, three seniors of color reflect on their experiences at BSM and offer words of advice for the future. 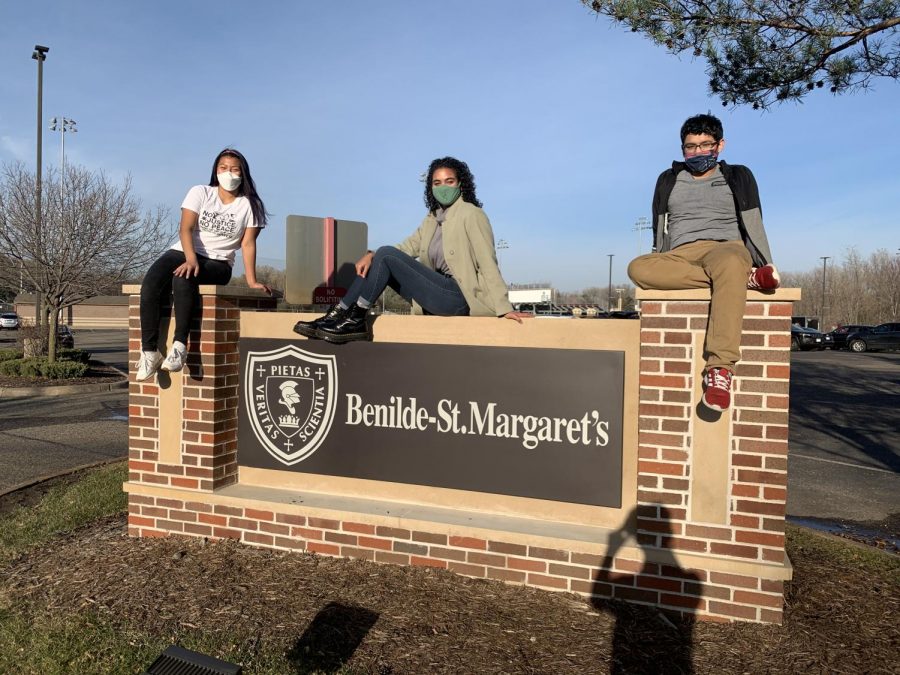 Benilde-St. Margaret’s students of color have spoken about their difficult experiences at BSM in years past, with published accounts of their struggles at a majority-white school appearing in 2012, 2015, and 2020. This year, as BSM makes strides towards true racial equity with its updated DEI plan (read more about that here), three seniors reflect on their experiences as students of color at BSM.

At BSM, racism or racial insensitivity doesn’t generally appear as bold-faced racial slurs and race-based bullying; it is more often found in racially insensitive jokes. Comments considered borderline are often brushed off as jokes rather than genuine sentiments. “[Students] know when to be sly and sneaky and put those comments in, where the teacher won’t hear… Their timing is just perfect… the names, and stuff like that. And people saying things and calling it a joke, or saying it’s not a big deal,” senior Xela Gunvalson said.

These insensitive comments may come from a place of racism, but often, students find that they come from a place of apathy. Some white students do not feel they have any obligation to understand the experiences of their person of color (POC) peers. “There are [some] students who don’t care, and they make it known that they don’t care and think the whole idea of discussing diversity is stupid. I heard students during our Black History Month speeches last year whining to their classmates… that dismissal of the POC experience, I’ve heard that a lot,” senior Sophie Coleman said.

Of course, not every white student at BSM is apathetic to understanding the student of color experience. Many demonstrate their support by involving themselves in groups designed to discuss societal issues, often touching on racial problems in the nation and beyond. “A group of younger students has started the Red Knights for Human Rights club, which is awesome, [and] that also encompasses other disenfranchised and oppressed groups, like the LGBTQ+ community,” Coleman said.

BSM’s Affinity Group, which is entering its sixth year, has traditionally been a place for BSM’s students of color to spend time with other POC students around BSM. The club has been a place for self-expression, mentorship, and development for its members. “[Affinity Group] was… one of the few places at Benilde that I felt like I belonged. It helped me in my true development. The teachers in Affinity helped me get back on track when I was falling behind. They gave me many opportunities to develop as a person but also to help me with my own identity,” senior Johan Dominguez-Lopez said.

This year, Affinity Group is shifting its focus from purely a student of color group to become a group dedicated to community-wide dialogue about racial issues at BSM. “Based on student feedback… there’s a desire to bring the conversation to the larger community. We’re hoping that one Tuesday a month will be a community-wide conversation… [to] understand everyone’s point of view,” Affinity Group coordinator and Spanish teacher Matthew McMerty-Brummer said.

Expanding the dialogue about race to the entire community is the goal for many students of color at BSM, not just the goal of a single club. In fact, some feel that breaking apathetic white students out of their echo chambers is the first step towards true racial equity at BSM. “[Some students] shelter themselves, cut themselves off. They’re not willing to listen, that’s the thing. They kind of just joke around, make fun… Some of them… create their own narrative on people like me, which is completely opposite to what I am,” Dominguez-Lopez said.

Although some students are unwilling to engage in discussions about race, students of color have found great support in many teachers and faculty members around BSM. “I know a teacher in every single department I can go and talk to. It’s not, like, every single teacher. It’s the ones that you’ve built up relationships with, the teachers that you’ve talked to… they’ll just listen, which I appreciate,” Dominguez-Lopez said.

In the past, students of color have felt frustrated about their time at BSM. The general perception of the administration in years past has been of a system that sides with white students in nearly every incident. “I don’t want to drag BSM through the mud here, but I also need to make sure my words aren’t misconstrued. BSM’s past reactions, I do think have been very poor… and BSM recognizes that. Especially regarding disciplinary action… an example needs to be set. They dealt with it quietly, which I understand, but at the same time, people of color needed to know that you’re on their side,” Coleman said.

The new 2020 DEI Plan is a major step for students of color at BSM. The updated inclusion efforts began over the summer, with discussions between students of color and DEI consultant Ms. Kendra Dodd. These discussions later expanded into community-wide discussions, including white students. As the plan kicks into action, the only regret of students of color is that it didn’t happen sooner. “Right now, they’re going on decent progress. I was part of the group interviewing certain candidates, like Kendra Dodd… At this point, we’re making good progress, but I feel like it could’ve happened sooner, one hundred percent,” Dominguez-Lopez said.

BSM’s students of color have had both positive and negative experiences at BSM, but as these three seniors prepare to graduate, they each offer words of encouragement to future generations. Some remind younger students to hold onto their identities. “Do not be afraid of who you are. Just because you may be excluded by other groups of students …  for [your mannerisms], for slang, your skin color, or your culture… it’s not strange, it’s your identity, so do not forget that,” Dominguez-Lopez said.

Others encourage future students of color to remember the upsides of a BSM education, especially at a time when BSM is actively working to support its students of color. “I would say that the opportunities are really great… there are so many options that you can do, the education is so advanced, stuff like that. I would say, building relationships with your teacher… They’re very understanding when you get to know them, and they can help you with anything you need,” Gunvalson said.

Still others remind students of color that although their experience may be spotted with struggles and setbacks, they are by no means invisible or alone at BSM. “Understand that you don’t have to do it alone. There are other students of color you can talk to, there are upperclassmen of color, there are teachers and faculty members who are one hundred percent willing to talk with you and help you. Use your voice…  If you see something that needs to change, go for it; don’t be shy about it… As students of color, it is our job to leave [BSM] much better than we found it,” Coleman said.