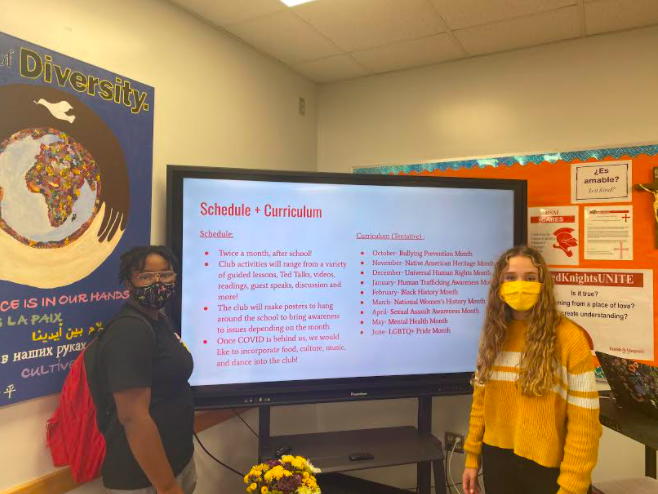 Photo Courtesy of from Francesca Lichtenberger

With all the distress and sorrow the world has felt over the past several months surrounding events caused by humanitarian and social justice issues, a pair of BSM sophomores have decided to help tackle the issue.

Over the summer, sophomores Francesca Lichtenberger and Jillian Petty started the Red Knights for Human Rights Club. The duo began thinking of ways they could impact their community and combat some of the injustices that were going on over the summer, and they ended up submitting their club proposal in August. They do not want to limit the club to only helping with issues at BSM but also the surrounding area. “The goal of the club is to create more empathy and kindness in our school as well as the greater BSM community,” Lichtenberger said.

Educating others about what has been going on within the city alone is one of their main objectives, along with informing people about human rights issues across all communities, including BSM itself. The girls were inspired by events that took place all across the country, and right here at BSM. “We were inspired to start this club after recent events in our own city, country, and school community. Jillian and I wanted to do something to help, so we wrote up a detailed club proposal and tentative curriculum and proposed the club to the administration. Our way of contributing is through educating ourselves and others and spreading awareness about humans rights issues! We are striving to improve the current environment at BSM,” Lichtenberger said.

The club meets twice a month after school in Room 137 and over Zoom to account for anyone who cannot make it in person. Their first meeting was on Tuesday, September 29, and it was an introductory meeting where the founders introduced themselves, talked about the schedule, introduced topics they will be involved in, and answered initial questions.

For students and faculty interested in joining the club, it is not too late. Email Lichtenberger or Petty to join. “The club is open to all students and staff who are interested in joining the club. We want to raise as much awareness as we can so all are welcome. We had a good first turnout both in-person and via Zoom. We are hoping to have even more participants at our next meeting,” Lichtenberger said.