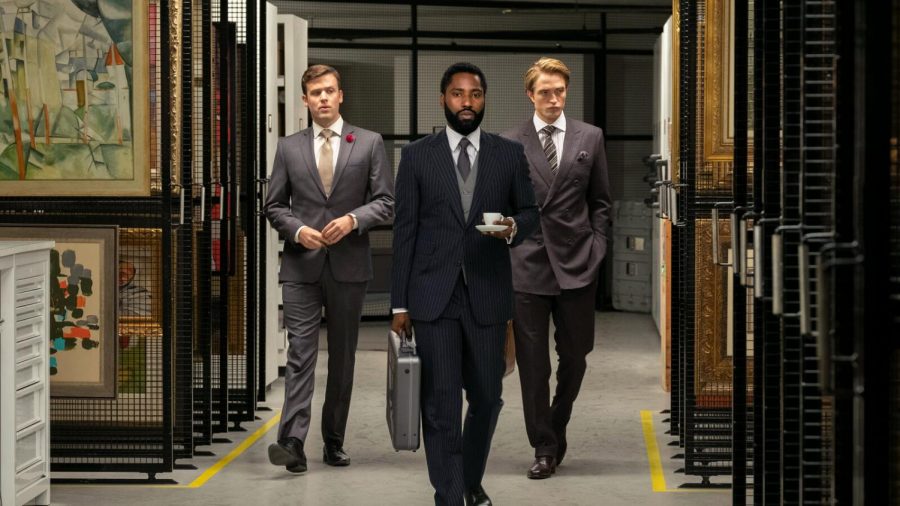 The new action movie, TENET, is a must-see for your first movie back to the theater.

Time and time travel have always been a key element of science fiction. First, becoming a pop culture phenomenon in the 80’s with the massive success “Back to the Future.” The genre’s latest would be blockbuster Tenet directed by Christopher Nolan. Tenet is a captivating and complex story that takes the traditional notion of time travel and refreshes it for newer audiences.

Enthusiastic moviegoers will recognize Nolan’s A-list status as a director. With his five Oscar nominations ranging from Best Director to Best Original screenplay, not to mention his tremendous success at the box office with franchises like the Dark Knight trilogy. Nolan looks to re-establish himself as a Oscar-level storyteller through his writing and direction of the film “Tenet.” Did he though?

When most people walk into a theater to watch a movie with an action premise, they are hoping for blood-pumping chase scenes, heart-stopping effects, and engaging visuals. This is Tenet’s strongest appeal by far. The action scenes are thrilling and intense, with help from a strong cast Tenet is an adrenaline rush from the beginning. In the opening scene, an opera house in Russia is taken over by terrorists and we see the protagonist, who is never named,  played by John David Washington storms in. Without delving into too much detail and spoiling the film, I can confirm that this opening scene is great. It establishes who the main character is and leaves the audience with questions they want answered. To its credit the film continues this beat of establishing things but still leaving the audience wanting more throughout the movie. In many ways, Tenet takes the intrigue from the Bond films and blends it with the smart action scenes from the Bourne movies; to create dynamic action for the viewer.

Tenet’s great action is a direct result of Nolan’s vision for scenes and the two leads (John David Washington and Robert Pattinson) excellent fight choreography. The fight scenes are dynamic because of how smooth they flow. The camera work is done to the highest level, changing depending on the scene, helping the audience immerse themselves.

John David Washington and Robert Pattinson deliver on powerful moments with solid acting doing their best with an uninspiring script. There is a particular scene at the end of the film that is meant to make the audience emotional, and the actors deliver on this scene well, leading to perhaps the best scene character-wise in the film.

Nolan then has delivered in his directing role. The film is shot with care. The actors were chosen with purpose. The directing and filmmaking are testaments to how good action film making can be, when done correctly.

Tenet is visually gripping no doubt; however as a story, it is convoluted and confusing. For as much as it is clever with camera work, it is shoddy in storytelling. Part of this stems from its complicated plot. Time travel plots in nature are confusing, so often they are simplified to basic concepts for the audience at the beginning of the movie. A great example of this is Back to the Future. The filmmakers establish an easy to follow way for time travel and how it works, through the Delorean car. Tenet follows this pattern only in that the beginning of the movie establishes some rules on how time travel works. However Tenet does not simplify the rules, this leads to confusion from the audience .

Tenet also suffers from an identity crisis. At its best, it’s a fun spy movie–Better paced than the Bond films and a little less realistic than the Bourne thrillers. At its worst, Tenet is a really confusing time travel mystery? I’m not even sure. While the time travel certainly creates a story you could really cut out some of the time travel adventure and keep the best  elements of the film; those being clean action with great set design. While this would create a drastically different movie it would certainly make it easier to understand.

Tenet’s beginning and end make enough sense; however in the middle, I can say that I was lost. I found that the confusing storytelling took me out of the engaging action scenes. The plot just has so many interruptions that it never hits its stride, nor does it become clear. Even at the end when all loose ends are supposed to be tied the viewer is still left a little confused. Perhaps this is what Nolan wanted, but does a film really fulfill its job if half the audience is left wondering what just happened?

My best advice is to go see it for yourself. It’s certainly exciting and therefore warrants your time. Nolan showed off his talent in the directing role, no doubt; however as a writer, I believe he fails to create a cohesive story.