“Killer Inside: The Mind of Aaron Hernandez” provides new details about the NFL-player’s homicidal tendencies 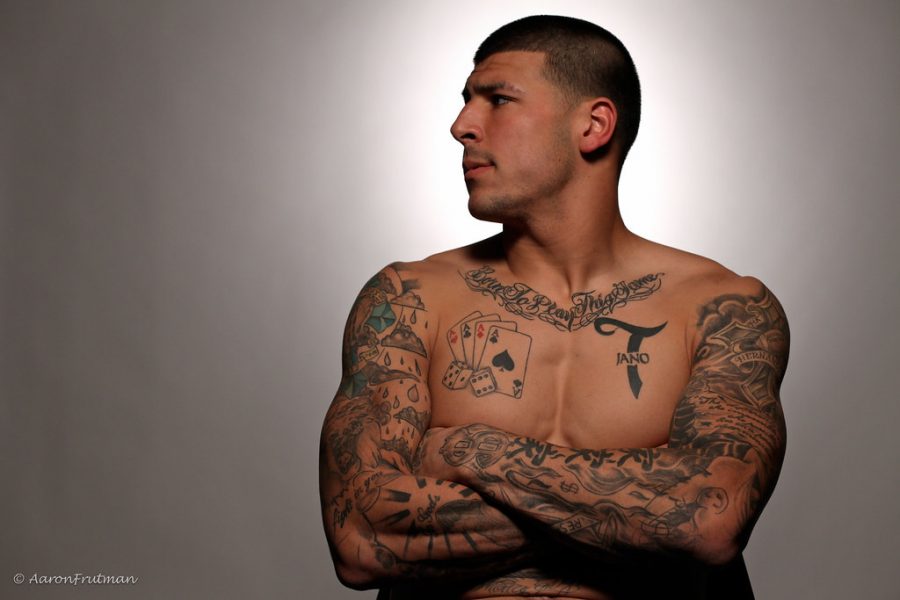 Aaron Hernandez poses for a photo shoot in 2010; the new Netflix documentary exposes his past.

After a horrific sequence of events from 2015-17 shook the sports world to the core, many people assume they already know everything about the story of Aaron Hernandez’ downfall, and that watching the new Netflix docu-series would simply be a waste of time. However, as someone who held this belief before watching, this is simply not the case. “Aaron Hernandez: Killer Inside” is a must-watch for everyone that enjoys true crime, what can lead a successful person to become a killer, and any football fan who witnessed Aaron Hernandez’ prolific NFL career as well as his subsequent downfall.

Throughout its 200-minute duration, the complete madness of Aaron Hernandez’s life story had me stunned numerous times while watching. From the way a man was able to murder an in-law in cold-blood, and then to go on to play an entire NFL season. To a potential hidden relationship between Aaron Hernandez and his own high school quarterback. To Hernandez possibly murdering 2 men, to then sign a $40 million contract with the New England Patriots a month later. Even stories from perhaps the most interesting college football team of all time—the 2008 national champion Florida Gators. The insightful stories and facts make this docu-series such an entertaining watch.

The most compelling relationship to watch develop was between Hernandez and Alexander Bradley. Bradley, who was a former drug dealer and criminal, grew very close to Aaron, and Bradley even considered them to be “best friends.” Bradley, who would then go on to testify against Hernandez in the double-homicide trial, had a good reason for disliking Hernandez. Their entire situation had much more depth than what originally showed on the surface. This situation, and being able to draw my own conclusion on who I thought committed the double-homicide was my favorite storyline in the docu-series.

A feature that made the film such a great watch was the recordings of Aaron Hernandez’s calls he made while in jail. These recorded dialogues from when Hernandez was alive brought a sense of personification to someone who was so vicious and evil. They made me feel awful for a man that just minutes prior had witnessed complete, unthinkable, heartless actions. While on his call with his wife and daughter, the selfless and caring side of Aaron Hernandez was shown, comforting his daughter, and reassuring her that they “It’s not goodbye, it’s see you later.” He also explains during the calls his love for Harry Potter, and how he feels jail is cozy, as everything in his life is finally organized. Along with his personal side, the calls between Aaron and his mother, Terri made helped me see how their rough relationship could have led him down the path he took.

Though I enjoyed the telling of the many facets of Aaron’s life that were shown, the part of the film that I did not totally agree with was the emphasis on his sexuality, which even though I found interesting, it felt strange discussing a very private part of someone’s life postmortem. While I can understand how there was a belief that these crimes were committed due to pent-up anger from hiding his sexuality, it seemed as though the producers of the series were coming out for Hernandez for him, which felt a little disrespectful as he had no say in a private decision that probably did not need to be shared with the public, at least at the rate it was mentioned during the shows.

The way that someone, gifted with the amount of God-given football talent that people can barely dream of, was able to pull the trigger on innocent people is very difficult for anyone to comprehend. Whether it was the severe levels of CTE, the loss of his father at a young age, mental illness, withdrawn resentment or many other factors, we will most likely never get to the bottom of the awful actions of Aaron Hernandez. However, these 3 hour-long episodes are a dark, captivating watch from start to finish that gives you the ability to come to your own conclusion on these tragic events.