“Little Women” has an important message about feminism 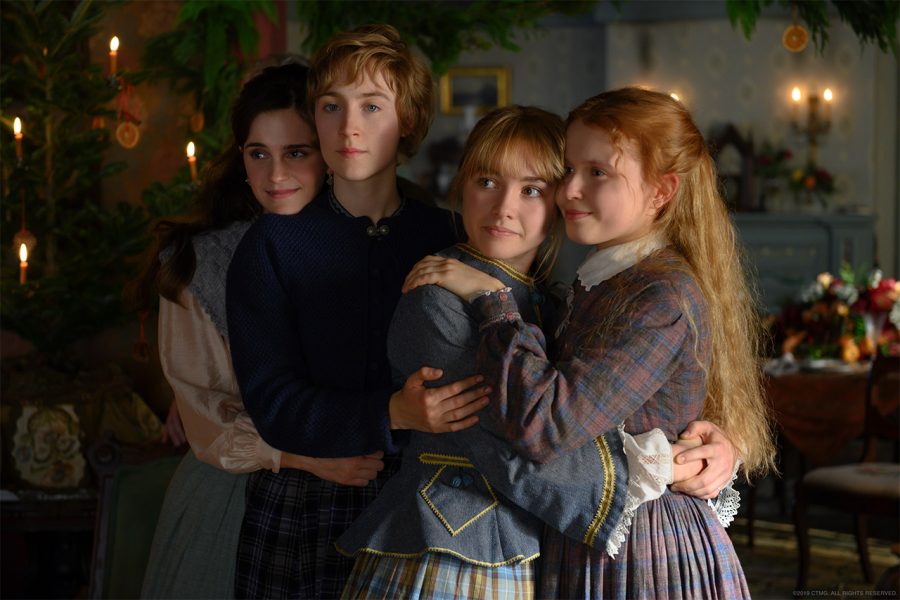 The outstanding visuals, casting, and wardrobe alone would make Little Women great, but the wonderfully executed themes of sexism, family, and identity are what truly set this movie apart.

Greta Gerwig’s adaptation of “Little Women” is a film worth watching not only for its star-studded cast, but also for its timeless and important message. Though “Little Women” by Louisa May Alcott is a novel with many adaptations, Gerwig’s writing and directing introduce more pronounced feminist values, providing a unique and modern twist on the original story. The outstanding visuals, casting, and wardrobe alone would make this movie great, but the wonderfully executed themes of sexism, family, and identity are what truly set it apart.

Set in the 1800s, the storyline revolves around Jo March (Saoirse Ronan) and her three sisters: Meg (Emma Watson), Amy (Florence Pugh), and Beth (Eliza Scanlen). The March family faces many financial struggles due to their father being absent in the war, forcing the sisters to navigate how their goals are restricted not only by their gender but their socioeconomic status as well. Jo is a passionate writer who wants to be independent; Meg wants to settle down and have children, and Amy feels pressure to marry rich in order to support her family. Despite being so different, the March girls stick together as they mature and support each other in their ambitions, showing the strength of familial relationships.

One of my favorite aspects of the movie was the casting. Every actor played their roles flawlessly, but Saoirse Ronan’s performance as Jo, and Florence Pugh’s performance as Amy both really stood out to me. Ronan perfectly captures Jo’s fiery confidence and stubbornness, and you can tell that she puts a lot of effort into the more emotional scenes. Even in Jo’s moments of self-doubt, Ronan’s performance is so genuine that the character and her problems start to become real. Ronan’s chemistry with Pugh also makes their sisterly bond extremely believable and there are plenty of tense moments shared between the two characters due to Amy’s headstrong and impulsive nature. However, Pugh’s portrayal of Amy succeeds in also emphasizing the character’s resourcefulness and wit. Despite providing a lot of comedic relief in an otherwise quite serious film, Amy is ambitious and always finds a way to get what she wants. Pugh does an excellent job of adding maturity to a character who is sometimes seen as bratty and spoiled, while still maintaining a sense of naïveté.

In addition to the acting, cinematography, set design, costume design, and musical score all contribute to the overall excellence of the film. One moment that combined all of these great qualities was a scene where the main characters go on a picnic at the beach. One of my favorite compositions of the movie, a piece by Alexandre Desplat titled “The Beach,” played during this scene and I thought it did a wonderful job of accentuating the playfulness of the characters. I also loved the coloring and lighting of the shot and the outfits were amazing. An interesting thing that the costume designer, Jacqueline Durran, did with the clothing in the film is that she had Laurie and Jo’s characters swap clothing throughout the movie to emphasize their connection as well as the androgynous quality to both characters.

The only thing that I didn’t love about the film was its use of flashbacks. The scenes are not in chronological order which makes it difficult in the beginning to understand the sequence of events. After a while, I was able to pick up on the fact that the warmer orange lighting signified the past and the cooler blue lighting signified the present narrative, but it would have been helpful information to know beforehand.

Little Women was easily one of my favorite films of 2019 due to its relevant subject matter and beautiful cinematography. Even if you haven’t read the book, this film is still highly enjoyable and meaningful. In fact, I think it could be advantageous to watch it without any expectations for what you might see. Ultimately, it’s clear that this adaptation of the famous book will stand the test of time and I know that if I ever have daughters, this is a movie that I will be sure to watch with them. I highly encourage you to see Little Women. Trust me, you will not be disappointed!