Is Tyler the Creator good? 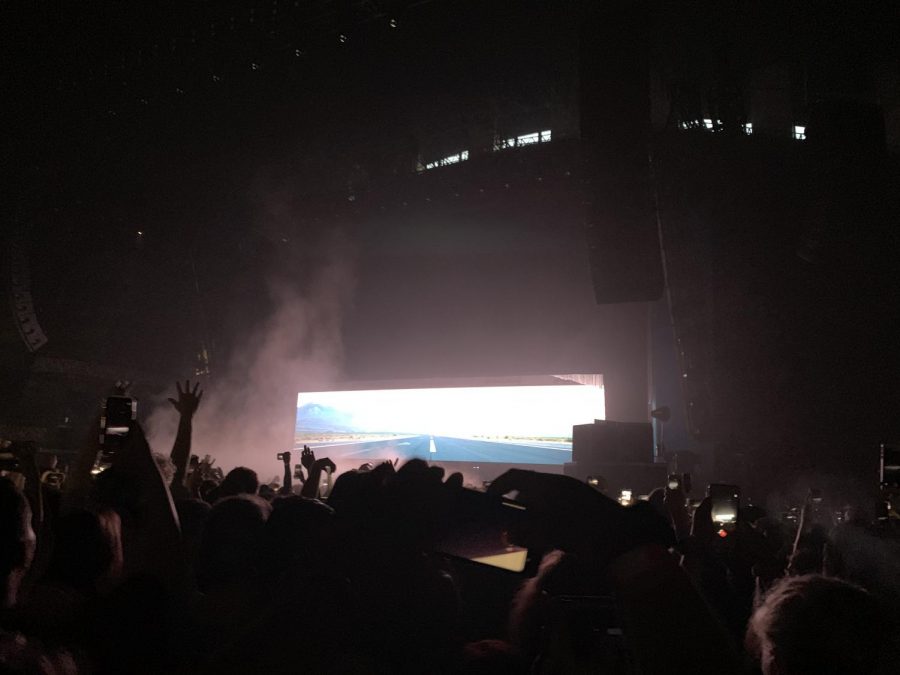 Senior Jacinda Smith took this photo of a Tyler, the Creator concert at the Armory.

Nope!
Tyler the Creator, or Tyler Okonma, is a 28-year-old music creator who is loved by many due to his flamboyant personality and weird style of music and fashion. His song “EARFQUAKE” is played repeatedly by radio stations and Spotify playlists . . . and it absolutely drives me insane.

In my opinion, Tyler the Creator is, to say the least, terrible. Many of his songs are written with no purpose or direction. They are simply a beat with Tyler talking over them in an offbeat tone about random things of no correlation––it’s sickening. It’s easy to see this by looking at the titles of his songs: “Potato Salad,” “NEW MAGIC WAND,” and again “EARFQUAKE.” These are all things that are random and have no meaning; it is like he went to the dictionary and selected random words as the names of each of his songs.

The song “EARFQUAKE” truly exhibits the lack of sense both he and his fans have. Girls and boys alike play this song almost as if it is their anthem-like it is speaking to them. All Tyler the Creator did in this “piece of art” was spell earthquake wrong and say that a girl “makes his Earf quake” over and over again. It is laughable to consider this good music, but yet his fans are like a cult and will live and die by Tyler the Creator’s music.

While I do not believe that his music is good whatsoever, I do not hate Tyler Okonma as a person; in fact, I find him very entertaining. His humor and his ability to relate to many different kinds of people––boys, girls, kids, adults, etc.––are the reasons I believe he is so well-liked. However, this blind-following of a terrible musician cannot continue to go on without notice––it must be called out, which is why I am here. Tyler the Creator is not good. Not going to lie though: I do like his song “See You Again.”
Yup!
The 28-year-old rapper/producer/songwriter Tyler the Creator is known as one of the most influential artists in current pop culture. Tyler was just recently awarded Music Innovator of the Year by the Wall Street Journal. If that doesn’t scream accomplishment then I don’t know what does. Stacked upon that he has been nominated for a Grammy three times, the first for his album with his rap group Odd Future which consisted of many big-name artists such as Frank Ocean and Earl Sweatshirt. His second Grammy nomination came from his 2018 album called Flower Boy, and his third nomination is from his most recent album IGOR. He also won Best New Artist by the VMA’s back in 2011, (https://www.imdb.com/name/nm4360094/awards). He even won an Annie Award for his work in the animated film of the Grinch, which was released in 2018.

Tyler the Creator is one of my favorite artists because of his versatility with his music. Tyler the Creator’s music genre can be considered many different things but most classify Tyler’s music as hip hop or alternative hip hop. Tyler is known for mixing many beats and sounds and putting them into loops. One signature thing Tyler does is that he likes to play with his voice; he will edit his voice to either be super deep or super high pitched, for example in the song Gone Gone / Thank You the hook is a high pitched voice but then the verses is Tyler’s deep pitched voice.