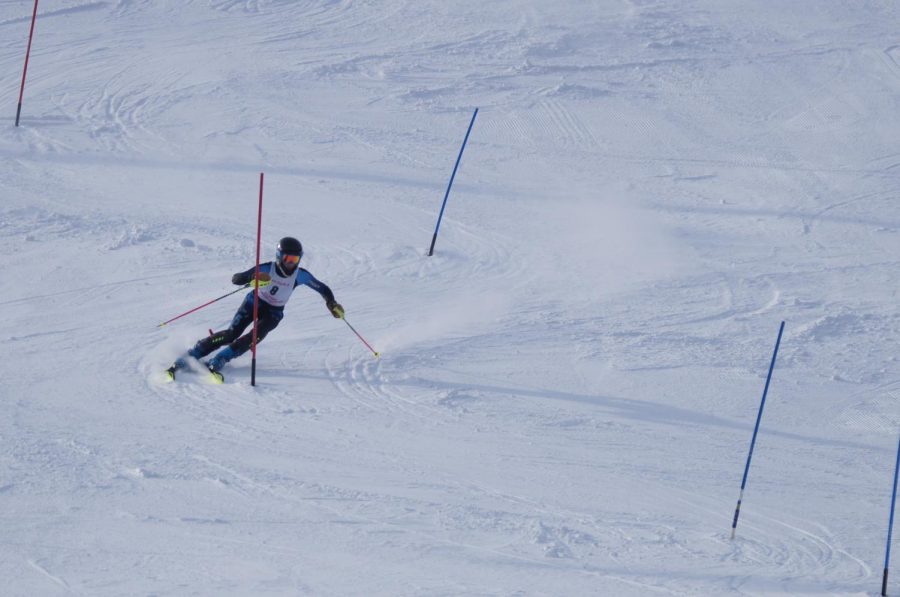 Davis Fortney trains for a state run this year.

As the alpine ski season continues, skiers are practicing and training in order to compete at the highest level possible. The team is led by senior captains Davis Fortney, Lillian Nesbitt, Abigail Swanson, and junior captain Thomas Worrel.

The many skiers are making their goals, planning events, and bonding together, all in hopes to do well and go to state again. “[The team is] really excited for the season to start,” junior Madeline Walesch said.

Coming into the 2019-2020 season, the skiers were excited to begin the competition. The team had high hopes for this new year, and they set strong goals to help stay on track all season. Both the boys’ and girls’ teams are not only excited to compete against other teams, but also their teammates. “Not only are you competing on a team and hoping to do well, but you are also competing against your teammates for a higher seed at the next race, so with my senior year I want to focus on enjoying the sport, not so much on the results,” Nesbit said.

Before the snow fell the skiers participated in dryland training, which pushed the skiers to compete to the best of their ability while having fun and accomplishing their goals. “Preparing for this season consisted of going to the gym everyday and intense dryland training, and lots of stretching. Technical preparation was making sure to have updated equipment, making sure to tune all my skis up so they respond at the highest level,” Fortney said.

Beyond competition, members of the team love seeing their teammates and knowing they’re making great memories. “Just seeing my teammates gets me really excited for the season; we have a really good group of people; I think we connect well,” junior Riley Leonard said.

Last year the girls’ team won the conference championship by winning all of their races. The boys’ team came close to success, landing in second place in their conference. The past few years, the boys’ team hasn’t been as competitive as they’d like, so coming into this season with a second-place medal will just push them to tighten up their focus and push harder. “[We] just can’t get siked out. Gotta stay mentally focused,” Fortney said.

This year the girls’ team is more determined than ever and is ready to make it to state again. “I think that the girls’ team is really excited about the upcoming season. We have a lot of great skiers, and I can’t wait to see what the season brings,” Lillian Nesbitt said.