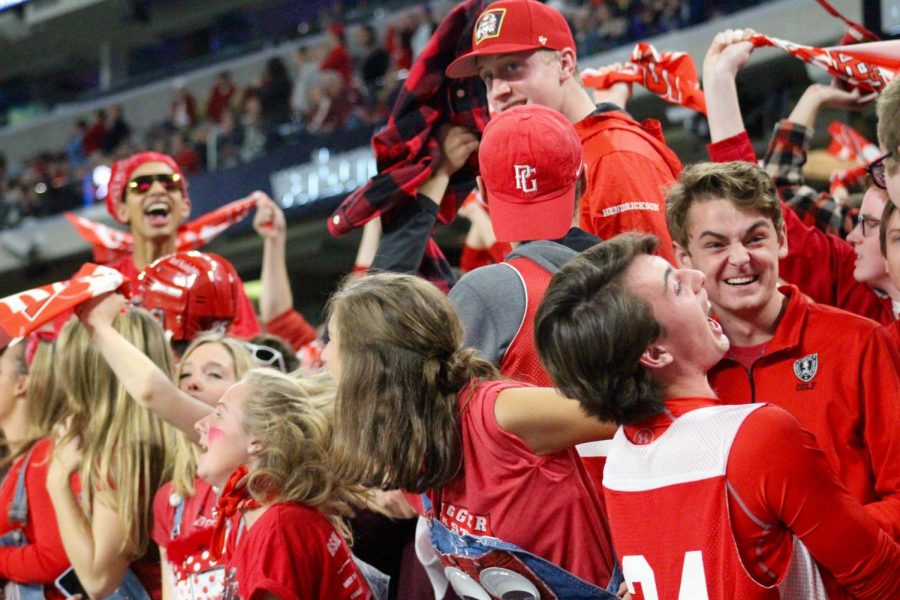 BSM students get rowdy in the stands following the win.

When the new squad was constructed in the fall of 2016 after countless seasons of coming up just short and missing playoffs, a new hope was brought amongst the team. A sense of a new beginning and a fresh start had loomed over the players, this was their year. From the shared respect amongst the players and staff to the love and support from the entire student section and parents, the atmosphere became indescribable.

Jon Hanks, 2016 Co-Head Coach: “Before the game, it was probably the most electric room I’ve been apart of. We were about to release the hounds.”

Ricky Floyd, 2016 Running Back: “The locker room before the game was fun; we were happy and blasting music as we did every game, but this time in the Vikings locker room.”

Bill Cheney, 2016 Team Statistician: “The atmosphere was crazy, seeing the sections of fans filling the lower bowl, and the excitement leading up to it made it so exciting. The kids were amped, but a lot of them hit an extreme focus once they got on the bus. Coaches were prepared, they had worked so hard to put the players into a position to succeed that it was time to start the clock and let them play.”

Sedona Brown, 2016 Manager: “It was crazy walking through the tunnel, seeing the lights and the enormity of the stadium. The fan section was the biggest it had ever been and there were a lot of people that didn’t even go to Benilde that came to support. It was very loud and almost felt like a movie when you were standing on the sidelines watching the plays unfold. I think there was like this energy that the team had, it was almost like you could feel it, everyone just wanted to win so badly and they were willing to do whatever they had to make it happen.”

John Landry, 2016 Linebacker: “It was one of the coolest experiences of my life. I remember how shocked I was when I was on the field.  As a receiver, I couldn’t even hear the quarterback count.”

Noah Layton, 2016 Freshman Player: “It was crazy to be on that big of a stage even if I didn’t play. The atmosphere and experience is something I will never forget.”

Shay Kinney, 2018 Graduate: “Two words: absolutely electric. It was probably the most energetic crowd I had been a part of at a BSM game of any sport. I don’t think there was one person in that crowd that wasn’t amping. It was an amazing atmosphere.”

Elijah Brown, 2016 Freshman Player: “It was the first year the US Bank Stadium [was open]. It was loud, and it was electric.”

Aaron Latterell, 2020 Graduate: “As an underclassman, I didn’t get the full experience, but I could definitely tell there was an electricity in the air. People had the faces on the sticks and signs and it was just generally rowdy. It was just really hype, incredible energy, we had a great group of guys out there.”

Henry Bird, 2018 Graduate: “We’d come really close the year before to winning, and I think a lot of people went in excited but bracing themselves for if we lost. Minnesota sports teams are known to lose-a lot-so I know a lot of my friends were excited but were pretty concerned. So when we came out strong and started to win, you could just feel the energy growing in the stands, and it kept up throughout the entire game.”

Eric Wilson, 2016 Captain: “It was crazy. I could have never dreamed of playing in a setting like that and having a huge fan section made the experience unreal. In reality, though, I also loved playing games even when we played in a subpar stadium with very little fans. It made the experience of rallying together even more significant.”

Mark Whitmore, Parent and 2016 Booster Club President:  “I’ll never forget the first half that was some of the most fun we [parents] have ever had.”

Pat Kalb, 2016 Defensive Lineman: “In the final two minutes, Liam Ford got a big interception that sealed the deal, I remember how loud the crowd was at that time, you couldn’t hear a thing.”

John Whitmore, 2016 Sophomore Starter: “[In the final seconds I kept thinking,] I can’t believe we’re really going to do this.”

Pat Kreiger, 2016 Co-Head Coach: “Surreal. First state championship for BSM, all the hard work and excitement came together to make a great atmosphere.”

Ricky Floyd, 2016 Running Back: “The only word I can think to use to describe the locker room after is electric.”

Sedona Brown, 2016 Manager: “After the game, it was the greatest feeling ever, everyone was embracing everyone and sharing the moment. once we got to the locker room you could hear the boys yelling and singing, the music was blasting. Obviously, [the managers] weren’t in the locker room, but you could hear them and the music from down the hall. It was so amazing because we finally did it after proving so many people wrong.”