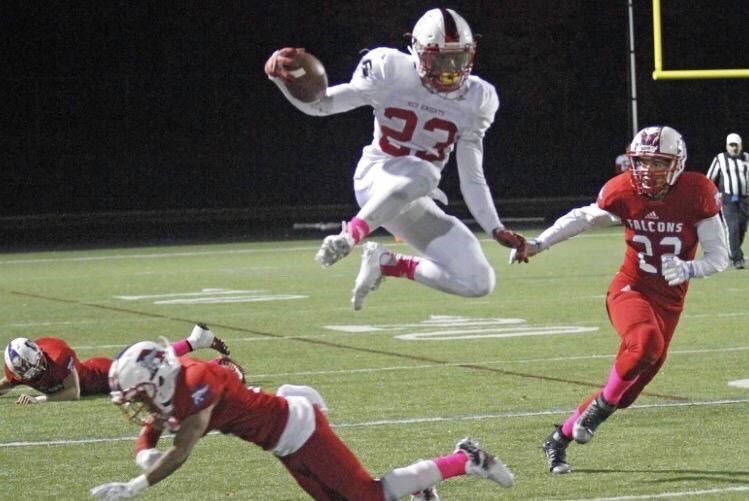 MVP Ricky Floyd hurdles the opposing player to gain the first down and extend the lead for the Red Knights.

There were many contributors to the Red Knights incredible championship season. Aside from being arguably the best running back in the state, Ricky Floyd played a huge role in the team, amassing nearly 2,000 yards of rushing on 244 touches with over 20 touchdowns, statistics every high school team dreams of seeing. Eric Wilson led the team as key offensive linemen and many others helped this family of Red Knights find victory. Everyone on the team and in the stands can agree on one thing for sure—this team was made up of champions.

Eric Wilson, 2016 Offensive Lineman & Captain: “Personally, I think it is hard to imagine our team getting anywhere near the state championship without Ricky Floyd. And to that end, Ricky could be considered the MVP of BSM football in general. Without Ricky leading by example on the field and being such a great and dependable player, it is hard to know whether the BSM program would have blossomed like it has over the past few years.”

Bill Cheney, Team Statistician: “Ricky Floyd was one of the most gifted athletes we have ever had and pairing him with Eric Wilson, who moved so smooth for the mountain that he was, was so fun to watch.”

Sedona Brown, 2016 Manager: “I think Ricky Floyd is the best football player to ever play at BSM. He was a running back on the championship team and he was too fast for people to tackle him. Ricky had many touchdowns that season which helped bring the team to the championship game.”

Jon Hanks, 2016 Co-Head Coach: “The whole team honestly, we had the best running back in the state and school history (Ricky Floyd), best O-lineman (Eric Wilson), and had a terrific leader at QB (Tommy Anderson) who was determined to win.”

Joe Creer, 2016 Assistant Coach: “To be honest, the very best MVP ever was Eric Wilson. He worked hard, he believed, he was a leader on and off the field. To watch him grow was something else.”

Ricky Floyd, 2016 Running Back: “Can I choose myself? If not I gotta give it to Liam Ford or Eric Wilson. Oh, I can pick myself? I would say me or Liam then.”