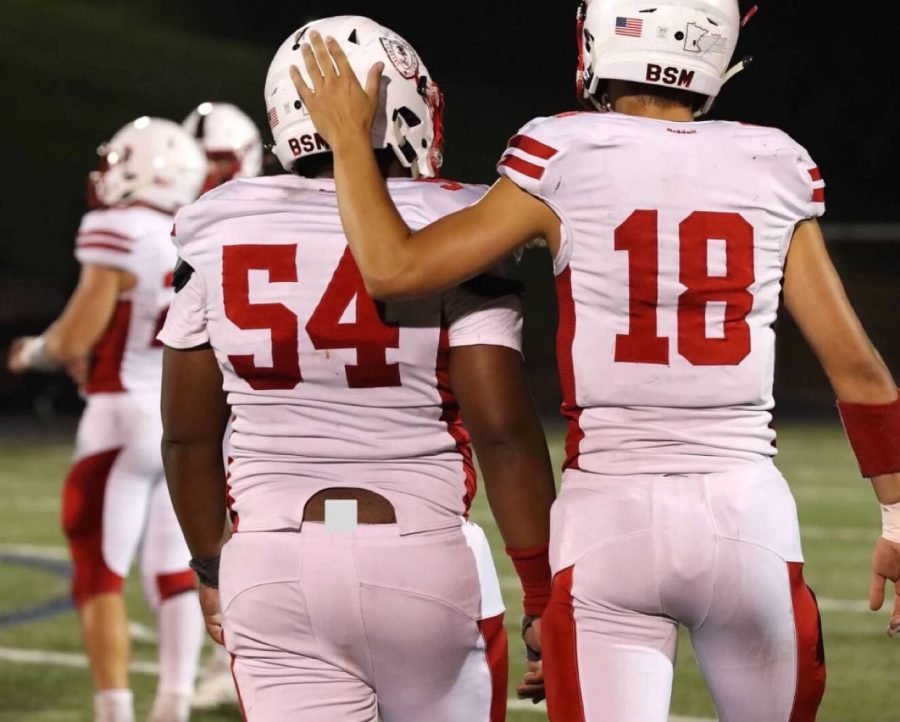 Current seniors Elijah Brown and Nick Peterson encourage one another during a game this season.

The Benilde St. Margaret’s football team has always been seen as a strong team—not only for their record—but their team chemistry as well as how they incorporate faith into the game. Although they come to play their best, they also come to be a family and challenge each other to be better, which is what makes the Red Knights who they are. From making goals in the beginning of the season, team dinners, and praying together before games, team traditions are still present today, bringing the players closer together to truly make them a family.

Joe Creer, 2016 Assistant Coach: “Our head coach (Jon Hanks) meets with the seniors in August before the season starts. They all write a list of goals for the year, and then combine them to make a team list. The goals this year were to go undefeated, win sections, and win state.”

Eric Wilson, 2016 Captain: I think what made this team special was the way different types of individuals came together and rallied around the central theme of playing football together. There were a lot of different types of kids on that team, but differences were set aside whenever we stepped on the field. It made us a closer group that cared a lot about each other.

Jerry Pettinger, Athletic Director: “I love how the team, right from the end of the day at 2:40 had prayer, ate together, and got totally prepared and zoned in for the game. The same also goes for the coaches and staff. This tradition has been proven and carries through today.”

Ricky Floyd, 2016 Running Back: “The team chemistry was perfect simply because we’ve been tight since freshman year. All those practices, tough losses and brutal games bring you closer, we saw everyone like a brother.”

Eric Wilson, 2016 Captain: “Being a Red Knight football player truly is a bond that will last a lifetime. In these two and a half years out of high school, I have continued to stay close to a lot of those teammates, many times laughing and reminiscing about moments associated with our senior season of football.”

Mark Whitmore, Parent and 2016 Booster Club President: “One thing about the Benide football program is they are all about being a family and that’s exactly what they showed.”

Nick Peterson, Current Senior Quarterback: “The team chemistry was at an all-time high this past season. We all got along very well this past summer.”

Pat Krieger, 2016 Co-Head Coach: “To be a Red Knight football player, a person has to be dedicated. It is a hard sport and comes with a lot of practice. Playing the games and throughout practice, the players learn a lot about themselves, teamwork, and accountability. There are skills in football that carry over to life, like communicating with other people and teamwork.”