Inside a conversation with Derrell Bouknight 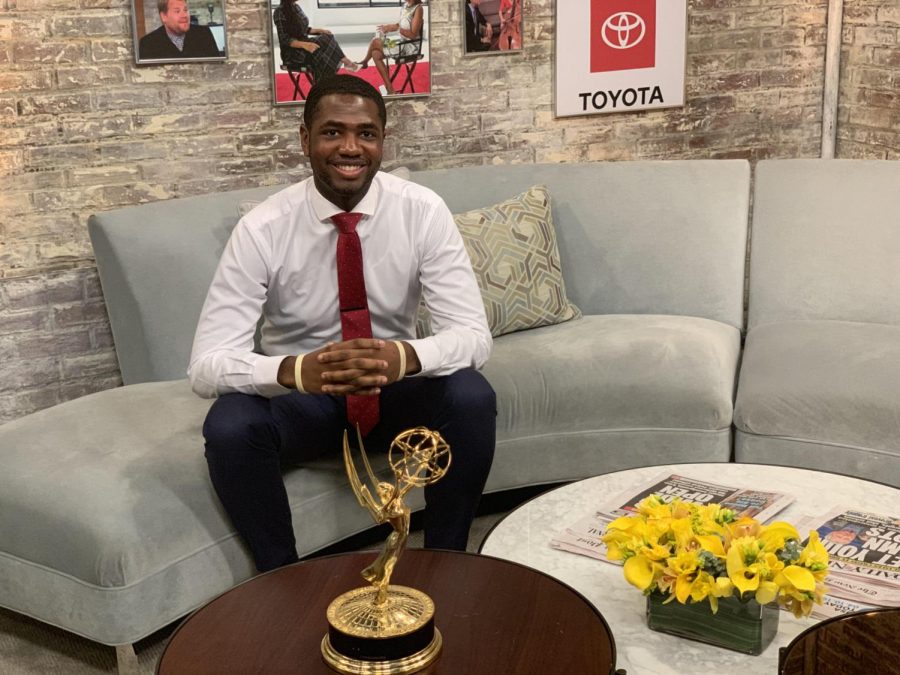 Derrell Bouknight turned his interest in sports into a career in journalism.

For CBS News Associate Derrell Bouknight, journalism started with sports. Now, he is still able to cover sports, as well as being a witness to major events such as the CBS R. Kelly interview and other breaking stories.

Bouknight found journalism through sports. From a young age, he was constantly playing sports. This love for sports led Bouknight to realize he wanted to be on TV. “I was about seven years old or so, and I loved sports. I would always watch sports, basketball, football, or something like that, and I knew all of the players and their stats and their numbers and who was playing who on what day and what time. At six or seven years old, [I] was able to just spew facts out of my mouth so fast and so quickly and people noticed not only that but my ability to communicate effectively at such a young age. Maybe I was too young and naive to realize it, but that’s really when I said to myself and my parents and those around me that I wanted to be on TV. I didn’t know exactly what I wanted to do, but I loved sports and I knew that I wanted to do something with that in the field of what I came to learn was journalism. It grew, and it developed from there; I landed my first internship in eighth grade, the summer going into my ninth grade year in high school. From there, I built my portfolio and built my résume and here I am now,” Bouknight said.

As he worked towards building his résume, Bouknight decided to apply for an internship at CBS. Bouknight applied three times, and on his third try, he was hired. “At CBS you have to be at least a junior in college to intern there. I applied once going into the summer of my junior year, then I applied to be an intern for the fall semester of my senior year, didn’t get it then either. On my third try, I applied to be an intern for the spring of 2019 and I finally got it. I interned there from January through May of 2019,” Bouknight said.

Interning three days a week at CBS This Morning, he was accompanied by six other interns, but Bouknight was the only one working in the booking department. His responsibilities included reaching out to people for leads, information, or stories and researching. He researched for some well-known stories such as the Michael Jackson accusers. Bouknight would also pitch stories in two different meetings as well. “I remember I pitched a story on my first day, and Gayle King was impressed with that,” Bouknight said.

Aside from researching numerous stories and interviews, including the research involving the Michael Jackson accusers, there was one story that Bouknight researched for that happened to go viral. This was the Gayle King interview with musician R. Kelly. “In terms of whether I expected the interview to blow up like that, no. I was just as shocked as the people next to me. I remember it clearly, the interview was in Chicago, it was at R. Kelly’s apartment. We have servers and live feeds… the whole interview took maybe two hours and most people only saw the ten minutes of it that was put on TV… Everybody was just baffled. When he got up and started screaming and throwing his fists in the air, my first concern was like, ‘Oh crap, is he going to hit Gayle?’ She was there in her normal calm self, you know, ‘Robert, Robert relax.’ I just remember the faces of some of the producers and senior producers who were in that newsroom just being in a state of shock, and I was no exception. It was a fun learning experience, it was tense, but it was cool, it was fun,” Bouknight said.

For this story, Bouknight was approached by a senior producer who asked him to put together a packet about the accusations of sexual assault and misconduct and charges against R. Kelly. “I was given about, maybe not even a day to do that. [The producer] approached me on a Tuesday afternoon or a Tuesday evening, he wanted this document back by Wednesday afternoon or Wednesday evening before I left for the day. I did that using the CBS archives, whether a newspaper broke the story, going back to the nineties and seeing what was documented against R. Kelly. CBS interviewed somebody he used to sing with, her daughter was believed to be in a home with R. Kelly at the time; we interviewed her in January and used many of her statements. So that’s what I mainly did,” Bouknight said.

It was in March of 2019 of Bouknight’s internship when he was told that a job was going to be offered, but there was no clear assignment. CBS was still in the process of trying to figure out where there were openings. In April of 2019, Bouknight accepted a job to be a news associate. “The news associate program at CBS News is a fifteen-month program… you spend about five months with three different shows, and the goal is to rotate departments whether it’s CBS This Morning, CBS Evening News, CBS Sunday Morning, to kind of see where you fit in and what you may want to do… Bouknight said.

Although he has joined CBS News full time, Bouknight has still managed to find time to report on one of his favorite things: sports. CBS News is separate from the CBS Sports Division, but there are still sports stories that are run. Since 2014, he has worked with the organization The Ricardo Report, which was created by Chad Ricardo. The Ricardo Report, Bouknight along with others, covers high school sports in D.C., Maryland, and Virginia area, along with some national coverage. By covering high school sports, Bouknight hopes to give athletes a platform that traditionally they would not have. “We often think of athletes as just athletes. We think of them as eye-candy or something pleasing visually and for our entertainment, but behind the jerseys, tank tops and shorts that basketball players wear or underneath the helmet and shoulder pads that football players wear, there’s a person. People tend to forget that. Something that I enjoy doing is feature writing. I love writing features about athletes or coaches or teams or whoever it may be too kind of extract that other elements from their lives about who they are and where they come from and how they got to where they are,” Bouknight said.

Having had experience not only in sports journalism, interning, and now working in the CBS News associate program, Bouknight has watched hundreds of people behind the scenes working and although many are working to be on camera. Booking producers, fact-checkers, the CBS legal department, numerous producers, editors, technical directors. “You have to build the show from the ground up. I’ve seen that first hand because I work the overnight shift, and I was kind of baffled and blown away by just how much is done between the hours of ten PM and seven AM. Even minutes leading up to the show, stuff is being adjusted and changed and tweaked; it’s kind of bizarre. But without the entire team, none of it would be possible,” Bouknight said.

As Bouknight continues to work, he has found that many of the skills he learned from interning have been helpful in his job. This includes communication and what could be argued as one of the most underrated yet important skills: the ability to listen and watch. Watching professional broadcast journalists taught Bouknight things he uses at his job daily. He also utilizes persistence and reliability. “People trusted me to do work that interns normally don’t do or didn’t do and that’s carried over now to me being twenty-two years old and producing upwards of five stories every night. Granted it may be small stories a little thirty-second story… it may seem minor on the surface, but you have to gather elements and reach out to people to obtain statements or find mugshots or find photos and search the internet, it’s hard, but I think reliability is something that going into my internship, I didn’t prioritize, but it’s something that kind of came naturally from seeing the everyday flow… Having that trust between me and senior producers and editors to do that I’m incredibly lucky and blessed to be in this position,” Bouknight said.