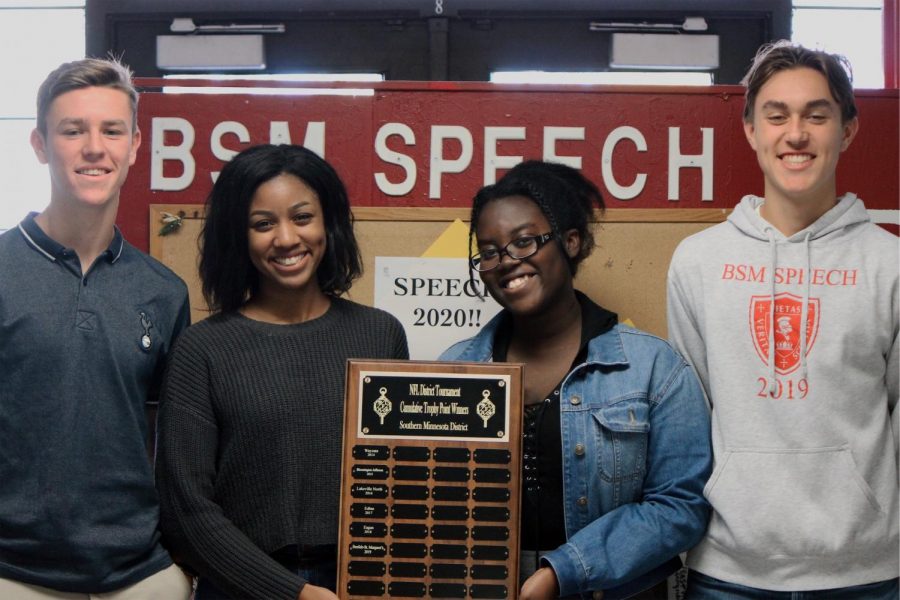 BSM speech team members win award after earning the most points and degrees in their district.

The Benilde-St. Margaret’s speech team was recently named the recipients of the 2018-2019 Leading Chapter Award in the Southern Minnesota district. This award is presented by the National Speech and Debate Association, or the NSDA, and it is the highest honor that this association awards. The NSDA presents this award to a team who excels in both their student participation and hard work.

The Leading Chapter award is presented to the team that has accumulated the most points and degrees in their district. With over 3,600 schools participating, only one school in each speech and debate district wins this esteemed award every year; the Benilde-St. Margaret’s team is apart of the Southern Minnesota district. “The award is complicated. It’s built on points, so for the past couple of years all speech members have worked hard to rack up our points and now that we won, our points will start back at zero,” senior speech captain Ronan Brew said.

This is a huge honor for Benilde-St. Margaret’s as it recognizes the speech and debate team for all of their dedication and success over the years. It is especially special to the seniors who have been working hard for this award over the past couple of years. “I am super proud of this team. This award is a big honor and we’ve all worked super hard for it. This award is something that all speech participants have helped our team achieve,” senior speech captain Breah Banks said.

The BSM speech team works hard every year starting their season in November and going all the way through March. It is a competitive environment that works towards creativity, listening, research, performance, analysis, and learning the art of public speaking. “I’ve been on speech since seventh grade, and it has made me both a better public speaker and a public figure. It has also given me more of a global perspective, “ junior varsity member Johan Dominguez-Lopez said.