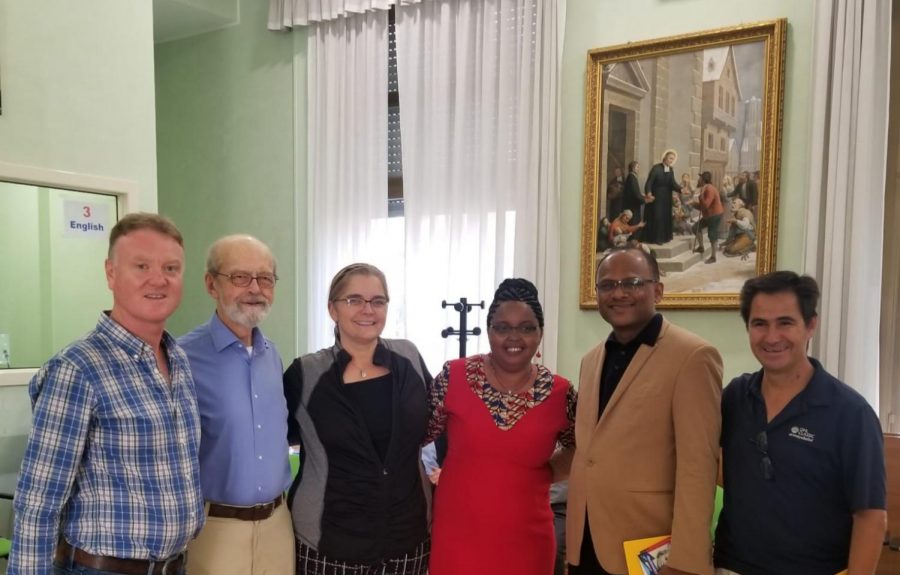 Dr. Susan Skinner stands alongside members of her group.

Principal Dr. Susan Skinner returned from her two-week trip to Italy on Monday, October 28, and she had loads to share about what she called the “experience of a lifetime.”

Going into the trip, Skinner was expected to be involved with a group that would work towards creating a document that would ultimately describe the Lasallian vocation. “St. John Baptist de Lasalle is the patron saint of all teachers, and as Catholic teachers, we feel a sense that what we are doing is more than just a job. God calls us into this place. Baptist said, ‘Teachers should be guides to students, helping them to learn and grow,’” Skinner said.

After all the effort her group put in, work still needs to be done. However, Skinner feels that the document is excellent, so far. “I was apart of some really good sessions in terms of input and feedback. In my mind, the document does a good job of speaking to how teachers play an important role in the Catholic education system,” Skinner said.

Everybody invited on the trip was involved in education in some way. There were principals, Christian Brothers, teachers, and retirees. “Everybody had experienced some aspect of Catholic education. The document really supported and clarified the concept that education and teaching is a true vocation,” Skinner said.

Once the document is finished, it will go to people involved with Catholic and Lasallian schools around the world. Hopefully, it will provide some clarity and vision about what it means to be a Lasallian teacher. “People will be able to integrate these components in these schools, making connections and deepening the understanding of one’s call to education,” Skinner said.

On the trip, Skinner’s days maintained a strict schedule. With a mass at 7:15 every morning followed by an 8:30 prayer service, 9:30 large group discussions, 10:15 coffee break, followed by small groups and two-hour lunches. In the afternoon, they can back together to repeat the cycle. The day concluded with an evening prayer service until dinner at 7:30. “Morning and evening prayer felt like going to the spa. I don’t get that time during my typical everyday. To have thirty minutes set aside for God in both the morning and night was great,” Skinner said.

The weekend in between the two weeks in which she was in Rome was time set aside for Skinner to bring out the touristy side of herself. Going to the Vatican Museum, Sistine Chapel, Colosseum, Roman Forum, was great, but to top it all off, she had the opportunity to attend a Mass with the Pope as the celebrant. “I couldn’t believe it. I didn’t think I would be able to get tickets because when I tried to get tickets before I left, I hadn’t heard back anything. When I got to Rome, I went to the office where you get tickets, and they said they didn’t have any left. I thought it would never happen, but on Saturday morning I got up for breakfast, and there was a note on the table that said, ‘If you need tickets for Mass tomorrow, here they are!’” Skinner said.

It’s not every day an opportunity like this comes around. Although Skinner admits she missed being at school, the experience is something she’ll never forget. “Overall, I feel like the experience exceeded my expectations. I feel so lucky to have been invited and able to go,” Skinner said.