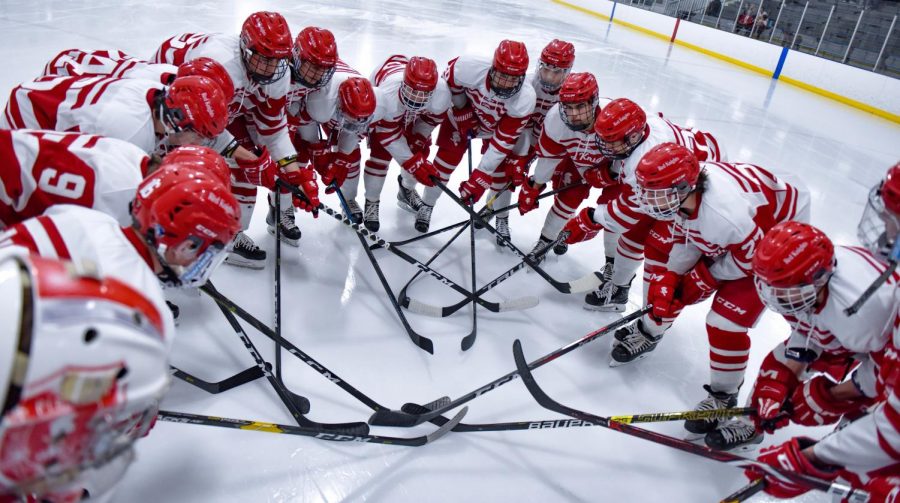 The boys' hockey team prepares for a game.

The last time that Benilde St. Margaret’s Boys’ Hockey team went to the Minnesota State tournament was 2012, but this year the team has a promising future. They enter the year chosen preseason number one for class 2A by MN Hockey Hub and ranked highly among other polls and predictions.

Last year, BSM lost in the section finals 1-5 to the 2019 State Champion Edina (2019 preseason ranked number one by MN Hockey Hub). This year BSM hockey has returned with all the same players except 2019 graduates Jett Johnson and Ian Bahr. “With how we finished the season last, losing to the state champions and only losing two key players, I think we deserve to be ranked highly,” senior captain Nate Schweitzer said.

Captain and top scorer of last year’s season, Blake Mesenburg, has concerns of being named number one preseason and understands it is going to be a lot of hard work. “I think it could be bad to be ranked number one because a lot of kids are acting like is just going to come to us, but it’s not. We are really going to have to work for it,” Mesenburg said.

There can be negative aspects to a high preseason ranking, “It puts a target on our back at the beginning of the season because other teams think we are the team to beat,” Defender and senior captain Seamus Foley said.

Mesenburg believes there are higher expectations on them this year due to the ranking, and it is going to be especially hard for the underclassmen. “I think since we have a lot of younger kids it puts a lot of pressure on them because they have big roles to fill,” Mesenburg said.

Head coach Ken Pauly shared his excitement for the season but also recognized the work it will take. “We have a lot of talent coming back and I think we’re worthy of being among the top five early-season ranked teams, but with that said, we are going to have our struggles,” Pauly said.

Foley also shares his excitement for the upcoming year. “I am beyond thrilled to start the season off with all of the guys. We have worked very hard during the offseason and over the past years to get to this point. I am hopeful and excited for the year ahead, and I hope we can live up to expectations,” Foley said.