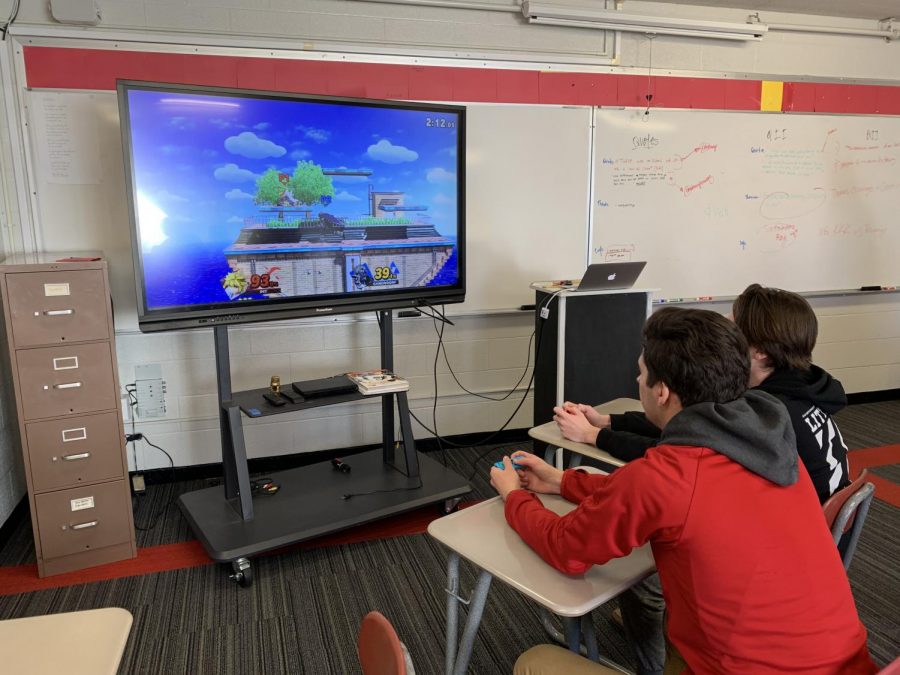 A couple of students play Super Smash Bros. The new esports club will provide a casual atmosphere in which to play games and hangout.

BSM is home to a variety of clubs and activities for students with all kinds of interests to participate in. A new esports club has been introduced to BSM this year, available to any student who wants to hang out, play video games, and have fun. The club is led by freshmen David Petit, Nathan Litts, and teacher-supervisor Mr. Casey Mosich. The group will meet after school on Mondays and Wednesdays during the winter and has 18 students signed up so far.

The students involved in the club hope to casually play a wide variety of video games after school, such as Super Smash Bros, Mario Kart, Madden, and Fifa. Petit, Litts, and Mosich want to create a fun and friendly environment for students to relax and game with one another. “It’s more of a casual, like, come and hang out thing,” Petit said.

As the esports club director, Mosich will be facilitating the group and making sure the club is running smoothly. He also guarantees that they will have the screens and video game consoles appropriate for the club. Mosich also plans on gaming when there is an open space for him. “I’ll certainly hop in for a game of whatever we’re playing; I love playing as well,” Mosich said.

This isn’t the first esports club in BSM’s history. From 2014 to 2017, there was an esports club led by Mr. Bill Cheney, help desk director, and former BSM students Tony Czakowski, Justin Barnett, and Evan Kincs. This group enjoyed casually playing video games together, but there were also a select few students who competitively played League of Legends against other high schools in a national tournament. In one tournament, the team finished in the top 30 out of 300 teams. “They would practice twice a week, and then they would actually play games on Friday nights, and they were livestreamed … so all the other kids in the club could watch it,” Cheney said.

While the club is only planning on playing games with each other nonchalantly, the organizers are open to competing at a higher level in case the participants have an interest in doing so. “If the club becomes more extensive we may have kids that want to enter in tournaments, but at this point, we aren’t planning on it,” Petit said.