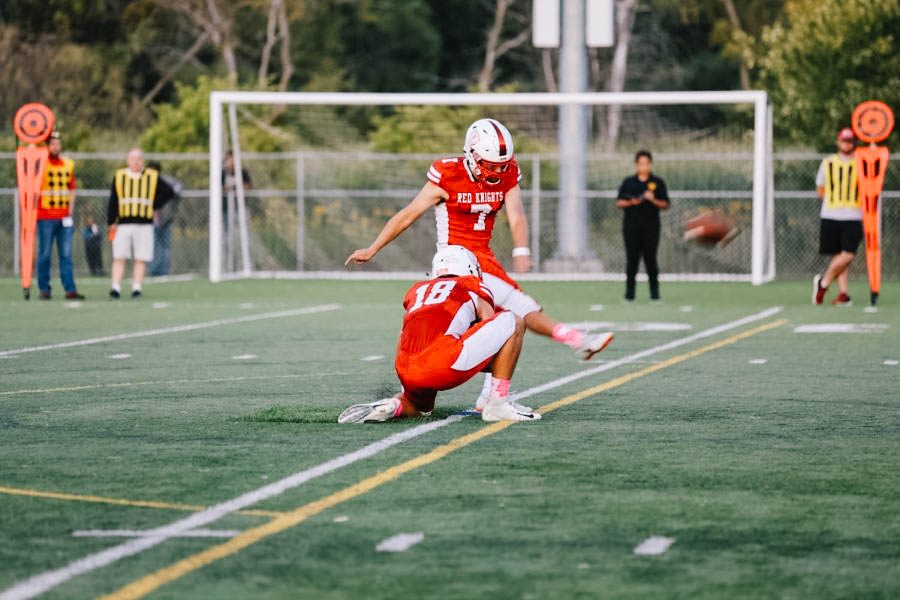 Louis Hyde kicks the ball for an extra point during a BSM football game.

Two-sport athlete Louis Hyde has taken the football and soccer teams by storm this fall season. Hyde has been a goalie for the boys’ varsity soccer team since his freshman year and returned this year as captain. He started his football career last year as a junior and has been the star kicker ever since.

Hyde has been playing soccer for nine years and attributes his successful football career to his hard work at soccer. Although kicking and goalie have some similar characteristics, football and soccer games have very different dynamics. “I would say for me personally, soccer games are more intense because I am on the field the entire game, and my team really depends on me to be at my best. For football games, I’m only on the field a few times a game, so I’m a lot more nervous and it’s scary to go kick in front of the whole school,” senior Hyde said.

Juggling two sports in one season is a tough task, especially during senior year. Hyde works hard at organizing his schedule to balance both sports. “The typical day for me is going to football practice from 3-4:30, and then going straight from football to my soccer game at 7. If I have soccer and football both right after school I’ll go to soccer because I am a captain,” senior  Hyde said.

The soccer and football coaches both support Hyde as a two-sport athlete. Because Louis has been playing soccer for longer, he spends more time on soccer even though football is more of a time commitment. “They are ok with it as long as I don’t miss any soccer,” Hyde said.