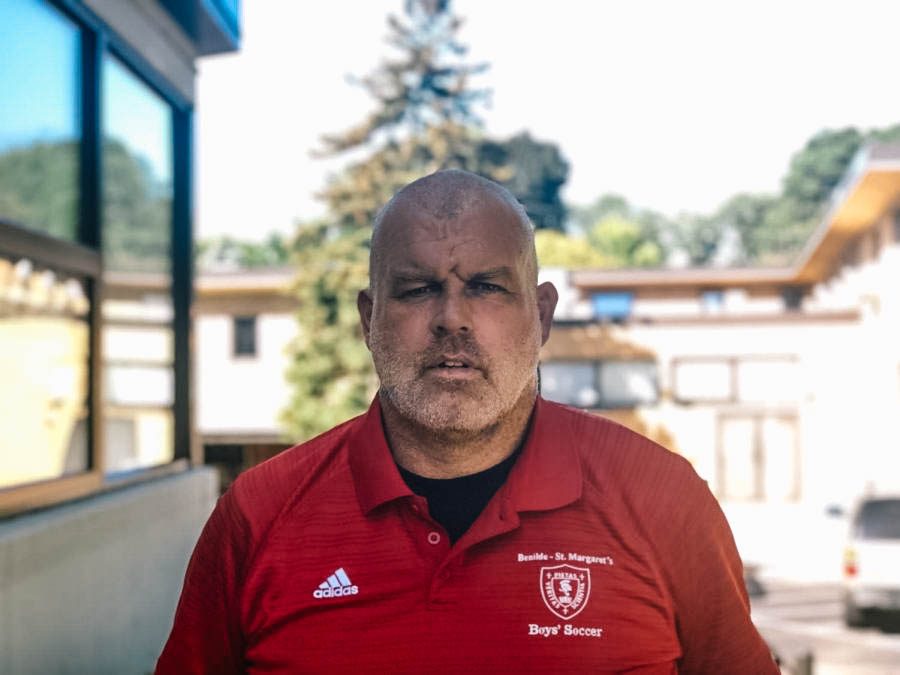 After coaching at BSM two years ago, Mr. Paul O’Connor is back to coach the boys' varsity soccer team.

This season the boys’ soccer team welcomes a new face to the program. Mr. Paul O’Connor takes the throne as the new head coach alongside Mr. Dave Platt.

After coaching at BSM two years ago, O’Connor is back with fire and passion which he hopes to spread to the rest of the team. “I love the game and enjoy playing and coaching it. I get excited when the players play well. I want to teach the boys to learn the game the right way and have fun,” O’Connor said.

O’Connor is familiar with the way things work at BSM. He is grateful for the opportunity to be back on campus coaching the Red Knights. “I appreciate the chance to come back to Benilde. Mr. [Jerry] Pettinger is very supportive of our team. I have enjoyed teaching these kids and helping them understand what they are capable of,” O’Connor said.

O’Connor has 30 years of coaching under his belt including jobs at Providence, Edina, and Hopkins where he played the role of both a goalie coach and assistant coach. Before coaching at these various Minnesota high schools, O’Connor started his coaching career in England. After coming to the United States, O’Connor learned a valuable lesson about coaching young players. “In the US, I have found that everyone can have a chance at playing soccer, so the teams are not as deep and skilled. It has taught me to break things down to help the players understand what I want them to do, and it has made me a better coach,” O’Connor said.

With O’Connor as the new coach, the team has a new face to believe in and looks forward to the positive changes that will come from his new coaching style. These changes include adding new players and adopting a new team routine. “Our team is really pumped up for the season because the team looks a lot different this year as we added new players,” senior captain Nels Birkeland said.

O’Connor is bringing in a new style of play this year in hopes that it will teach the players not to play to win but to play the game how it should be played. He developed this coaching style from his many years of playing and coaching in the soccer world. “I want my players to use their teammates and not play chip and chase. Play the entire field from goalie to defense to offense. It allows for more options for us to move the ball around,” O’Connor said.

The players have enjoyed their time with their new coach, and they continue to familiarize themselves with O’Connor. They are putting in the time and effort as they strive towards becoming the team to beat come playoffs. “In the short time that he has been on campus, players have learned a lot of new techniques and enjoyed being around him because of the energy he brings,” senior captain Louis Hyde said.

With the first couple of games in the books, Coach O’Connor has already found a few mental and physical aspects that need to be changed. On and off the field, O’Connor’s personality has helped bring the team together to prepare for the rest of the season. “I think the boys are too hard on themselves. We have played hard with every team we have faced. We have changed the formation to have more shots on goal. This will lead to more goals and the players will gain more confidence in their abilities,” O’Connor said.