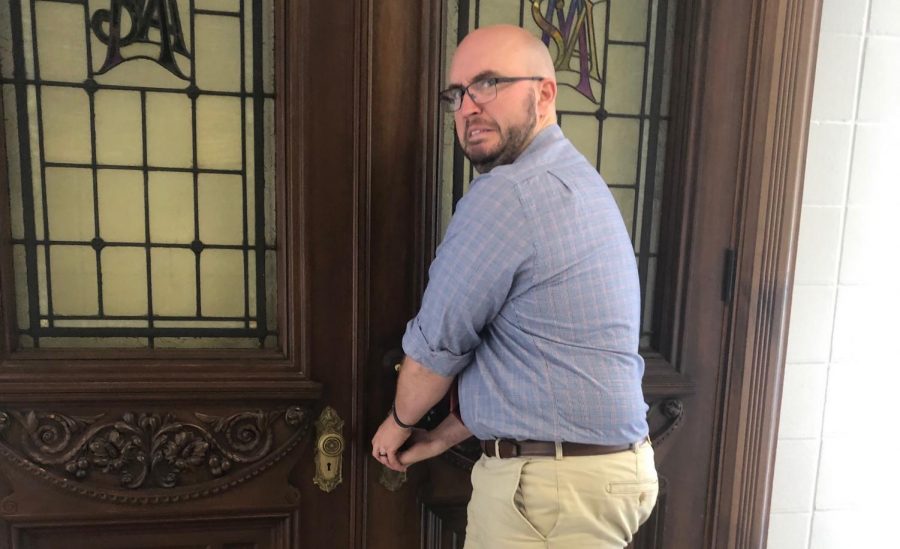 Jake Mahler expresses his theatrical side.

This year, a former BSM student, Mr. Jake Mahler stepped in as the new Artistic Director for the Theater department, a math teacher for four different classes, and he helps with Audio Visual, where he sets up microphones and showscreens.

Although math and theater might not seem to have much in common, Mahler uses his skills from theater to help in the classroom. “[I need the] structure of the mathematics and the creativity of theater,” Mahler said.

Mahler spent time touring with the American Shakespeare Theater where he was on tour on the East Coast. He was in plays such as “MacBeth” and many other Shakespeare classics. While on tour he would do workshops with students at colleges but also some high schools.

After the tour, he moved to Chicago and did ACT prep. Then Mahler moved to California and did long term subbing, where he taught AP Calc BC for a whole semester. Then, he moved back to Minnesota, his home, where he found a job here at BSM. He saw that there was a job opportunity all the way in Minnesota and he took it. BSM offered a chance to get closer to his family and have a job in a place where it feels less foreign.

Mahler is loving his job so far at BSM. He has noticed that the culture at BSM is the best he has seen at any school he has been to. He thinks that the students are very interactive which he greatly appreciates. “I have kids that seem eager and want to engage even if it’s in a subject where they don’t feel great about. Instead of tuning out…they will put forth effort which I think is great,” Mahler said.

I have kids that seem eager and want to engage even if it’s in a subject where they don’t feel great about. Instead of tuning out…they will put forth effort which I think is great”

Mahler has high hopes for the future at BSM. He wants to somehow use the atrium as the set of small act plays where kids can get involved where they don’t have to commit as much time as a full play. “If there are kids that want to be involved in theater but haven’t been able to commit to the full long projects that they should reach out…because we are looking to do smaller projects with less of a time commitment,” Mahler said.