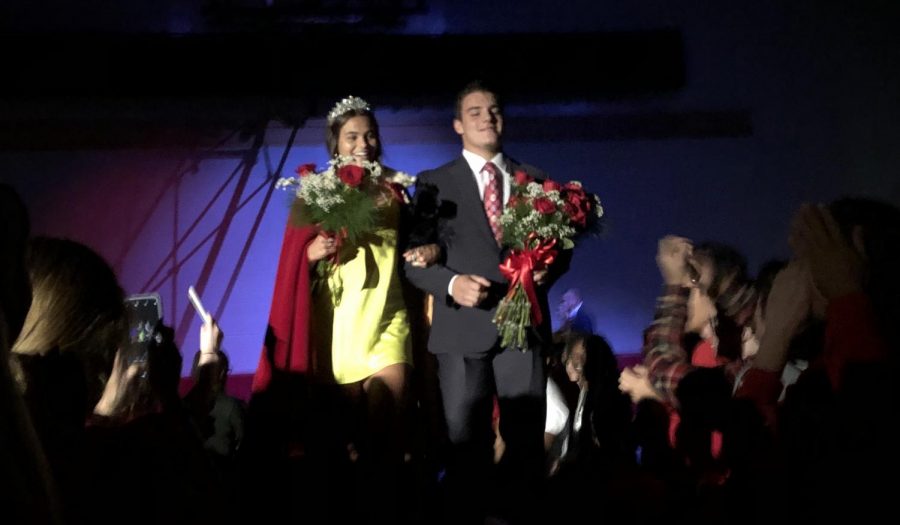 Seniors Joe Marinaro and Frida Fortier celebrate their selection as king and queen of this year's Homecoming Week.

For longer than anyone can remember, BSM students have chosen twelve students to serve on the Homecoming Court as proud representatives of the BSM community. “It’s exciting and cool to be a part of this special thing. It’s a new experience for me and I look forward to dancing in front of the school,” Ryan Gregerson said.

Homecoming Week begins with the annual coronation where Homecoming Court members perform dances on a runway before the king and queen are officially crowned. The students chosen for Homecoming Court have many responsibilities, starting with coming up with a dance for the school. “We did ‘One Dance’ by Drake because we had a variety of different moves and the song was easy to dance to,” Morgan Anderson said.

In addition to performing the dance in front of the school, the BSM community celebrates the court members during halftime of Friday’s football game. Court members walk, often with jitters, across the field as they wave to the BSM community. “I think it will be fun to be introduced during halftime but I will also be very nervous,” Alexis Borgelt said.

To celebrate the festivities fo Homecoming Week, students from grades 9-12 vote on a king and queen to reign over the events of the week. This year, students chose Joe Marinaro as king and Frida Fortier as queen. “It feels good to win homecoming queen but I believe everyone has a fair chance to win,” Frida Fortier said.