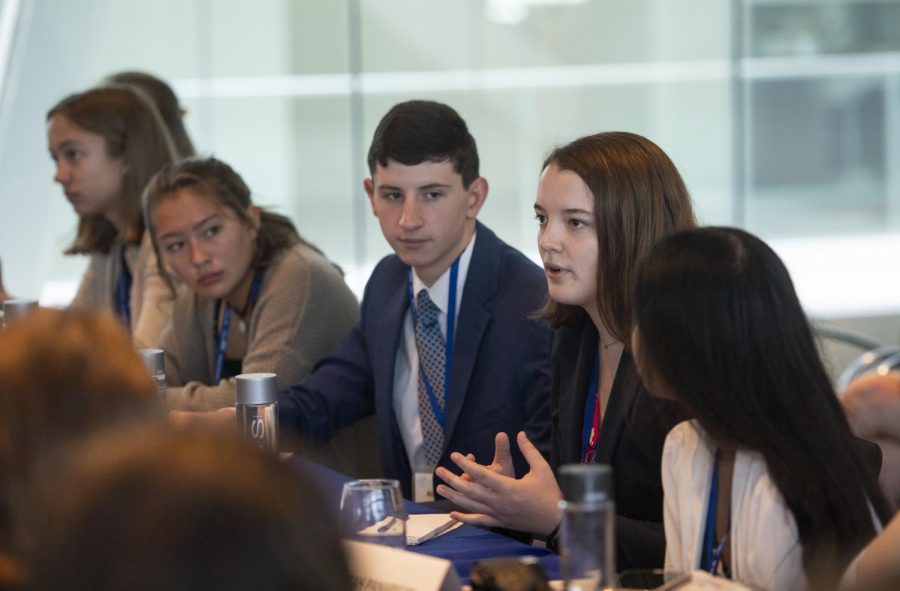 My dream is to be the Chief Political Correspondent for CNN. The idea of reporting on US politics for a living excites me. This past summer, when I was presented the opportunity to spend one week in Washington D.C. as the Minnesota representative for the Al Neuharth Free Spirit Program, I gladly accepted the offer. My time in DC was challenging, but it strengthened my love for political reporting and effectively demonstrated the way journalism connects us to the world around us.

The Al Neuharth Free Spirit program was created by the Freedom Forum Institute to honor Neuharth who was the founder of USA Today, Newseum, and the Freedom Forum. It has the goal to inspire and encourage students who display qualities of a free spirit to pursue a career in journalism. It is also meant to show students how the First Amendment is the cornerstone of democracy.

Throughout the week, we heard from numerous journalists. Many were from the Washington Post, USA Today, and the New York Times. Each had different insights and advice to offer. Aside from journalists, we heard from a former member of President George Bush’s press office, former colleagues of Al Neuharth, and freedom riders from the civil rights era.

On the first Sunday of the experience, we boarded a bus to go to a live taping of Meet The Press, hosted by Chuck Todd. That day, his guests were presidential candidate Mayor Pete Buttigieg and Representative Steve Scalise. Between interviews and panel discussions, the hour went by fast. Afterwards, we got to spend some time hearing from Todd, as well as asking him some questions. Todd really emphasized the importance of reporting with integrity, as well as making sure the news one is reporting is relevant and shows an understanding of the data and topic at hand.

Todd was not the only political journalist who spoke to us during the week. David Farenthold, a reporter with the Washington Post came and talked to us as well. Farenthold has reported on President Trump’s business and conflicts of interest. His discussion was largely focused on political reporting, as well as the work it takes to find certain sources. At the end, he opened it up for a question and answer session. During this quick Q&A, he gave me advice on how to strengthen my political reporting: I can report national events, but it is also important to report on state level government to gain experience.

Aside from meeting politicians and members from the media, there were a few places we got to visit. We toured the USA Today office and met current editors and writers. Later in the week, we got to visit the US Capitol. While at the Capitol, we toured both the Senate and House press chambers, which are in the balcony and overlook the floor, as well as see the press conference room. While there, the pages were preparing the floor for that day’s hearings. It was so interesting to hear about the press’ history with congress, as well as see the places where so much happens and where those with political power work to create laws.

The day that sticks out the most to me is the day we went to the E. Barrett Prettyman United States Courthouse. This building houses the US District Court for the District of Columbia, United States Court of Appeals for the District of Columbia Circuit, and the United States Foreign Intelligence Surveillance Court. I was already excited to be there, for many high profile cases have taken place in that court. Once in the courtroom, we were briefed on how the day would go, who the attorneys were, and that the mock trial would be presided by Senior Judge Royce Lamberth. After the introduction, we were separated into groups. The student attorneys went with the attorneys and the “jury” was sent to two different rooms to come up with questions.

Once the case began, I was enthralled. Hearing the different arguments and the questions from the judge allowed for me to not only be engaged with the trial, but it gave me the opportunity to think about how I would want to present my argument if I were an attorney. After the trial was done, we got to debate our stances as well as ask Judge Lamberth questions. I had not intended it to have such an impact, reflecting back on it has become one of the most memorable experiences of the program, as well as one of my favorite.

Looking at my experience at the 2019 Al Neuharth Free Spirit conference, it is something I will never forget. I learned so much about reporting, discovered that my interests in law and journalism do intersect, and made lasting and meaningful connections with those around me. The friends, mentorship, and knowledge I gained ignited a new level of interest in political journalism.