Ultimate celebrates growth and looks forward to next season 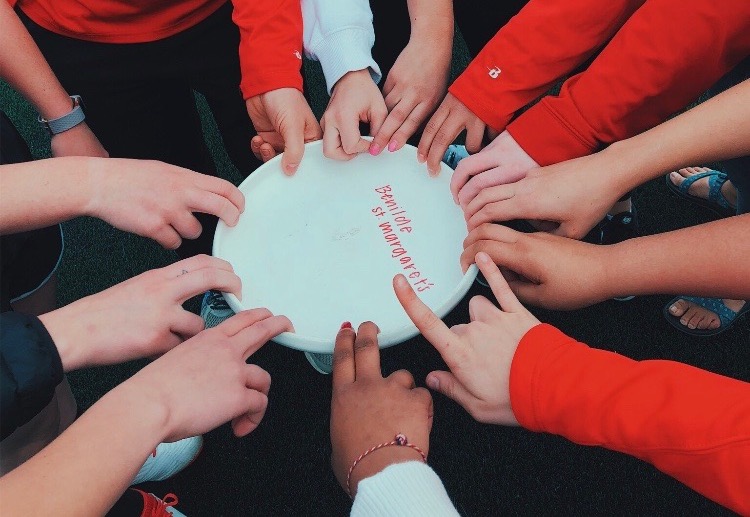 This season, the Ultimate team, led by captains juniors Alice Petty and Molly Mullin and senior Ana McDonough, had about three times the number of girls as last year.

This season, the Ultimate team, led by captains juniors Alice Petty and Molly Mullin and senior Ana McDonough, had about three times the number of girls as last year. Previously BSM Ultimate had not won more than one game a season; this year, they won 6 of their 9 games. Captains, players, and coaches are all extremely proud of each other and are ready for the next season to begin. “We have come a long way and I’m just so excited for next year,” Petty said.

Not only did the team’s record improved significantly, but the players did as well. Before joining the team, a large chunk of players had not thrown or even held a frisbee. After the first few games, the girls got the hang of it and became a great help to their team. “We really improved our throws and cutting skills. I’m hoping that’ll help next year,” Petty said.

One of the team’s coaches is math teacher Mr. John Groess. Groess has played and coached frisbee for several different teams. He began coaching when he was a college student in the summer of 2008, and ever since, Groess has been pushing for his students to pick up the sport even if they haven’t played before. “It is crazy to think about how far we have gone,” Groess said.

Groess’s goals for the season were to expand the capabilities of the team by growing in number of players. After a successful year of expansion, Groess has began to create goals for next year. Next year, Groess wants to put an emphasis on player development. He loves to see players perform better over time, and he hopes they will begin to love the game just as much as he does. Groess hopes this will help the team as a whole to compete and play to the best of their abilities. “It is amazing every year when someone new picks up a frisbee for the first time…within 2-3 weeks suddenly they have transformed and love the game,” Groess said.