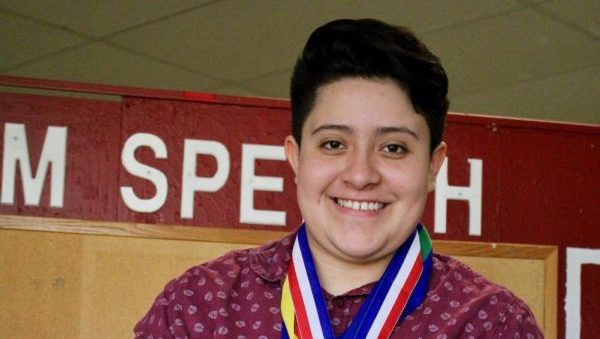 Myrka Zambrano has been very successful in speech and mock trail.

Myrka Zambrano spent half of her life in Ecuador before coming to BSM. Now, she is working for change within BSM through her involvement in speech and mock trial, and is striving to improve the United States through her work with politics.

Zambrano was born in the United States, but moved to Ecuador when she was in elementary school. “When I was there it was very beautiful and I really liked being in around the culture and I just felt different than I feel here. Here there are a lot of rules and a lot of stress over politics––so much more pressure for people to be so much more involved and informed versus over there, you can be whoever you want to be and you don’t have that pressure of doing something really big,” Zambrano said.

After spending her childhood in Ecuador, Zambrano moved back to the United States when she was in middle school. “I actually began forgetting my English to the point where my mom put in classes outside of school to learn English again. So every single day after school, I would go to this place where they would re-teach me English and re-teach me how to write it because grammatically in Spanish, it’s so different. That’s why I struggle sometimes to write English, I learned the commas and all that stuff here, then I transitioned over there and it was completely different. Then I came back here, so the basics that I learned were a mixture of English and Spanish,” Zambrano said.

After spending two years at a predominantly Latino school, Zambrano came to BSM in 9th grade. “It was really hard because I was used to seeing people like me. So then I’ve never really completely grasped the concept of race until I came here. In my own little world, it was like, ‘Oh yeah African American people exist, white people exist, Latin people exist.’ But I just saw people, until I came here, and it’s divided. I think BSM was a real culture shock for me, and I know that should’ve happened so much earlier in my growing up, but it didn’t because I was moving so much, and I went to a school that was dominantly Latino. Just coming here was a completely different environment and I didn’t know how to interact with a lot of people and English became so much harder all of a sudden,” Zambrano said.

After coming to BSM, Zambrano worked to get involved through activities like speech and mock trial. Zambrano joined speech after taking acting class. “I missed the auditions so I went to talk to [Ms. Maura Brew] and she said I could be on the team. She handed me a piece, and the first time I ever performed, I completely blanked out for three minutes and then gave a two-minute speech. I remember hating it so much, and then I went to Ms. Brew, and she told me to go into my second round, and I went into my second round, and I killed it. Ever since, I just went at it really hard, and I love it so much––such a good activity, I think everyone should do it,” Zambrano said.

Zambrano joined mock trial out of curiosity, and then fell in love with the activity. “I feel like I’ve grown as a person because of mock trial and speech because it’s taught me so much about myself. Speech has taught me to express myself and has taught me to dominate language, as has mock trial, because really when you think about it, you are perfecting the art of expressing yourself and doing that in front of people and being able to actually transmit your message to other people––it’s just a beautiful thing,” Zambrano said.

In addition to expressing herself through activities at BSM, Zambrano has worked for change outside of BSM. She even hopes to run for public office one day. “I work with the Women’s Foundation of Minnesota and Office of Governor Tim Walz to advance and promote equality for women in MN, I’ve been awarded the Bank Of America Student Leader Award, I interned for Ilhan Omar this summer, I interned for Hennepin Theatre Trust this summer, I helped bring Hamilton (the musical) to MN, I went to DC and talked to our senators about advancing opportunities for LGBTQ+ youth in MN, and I’ve conducted research with 501(c)3 organizations that focus on art with that research I developed a proposal to better the greater MN community through public works of art and then presented that to Bank Of America,” Zambrano said.