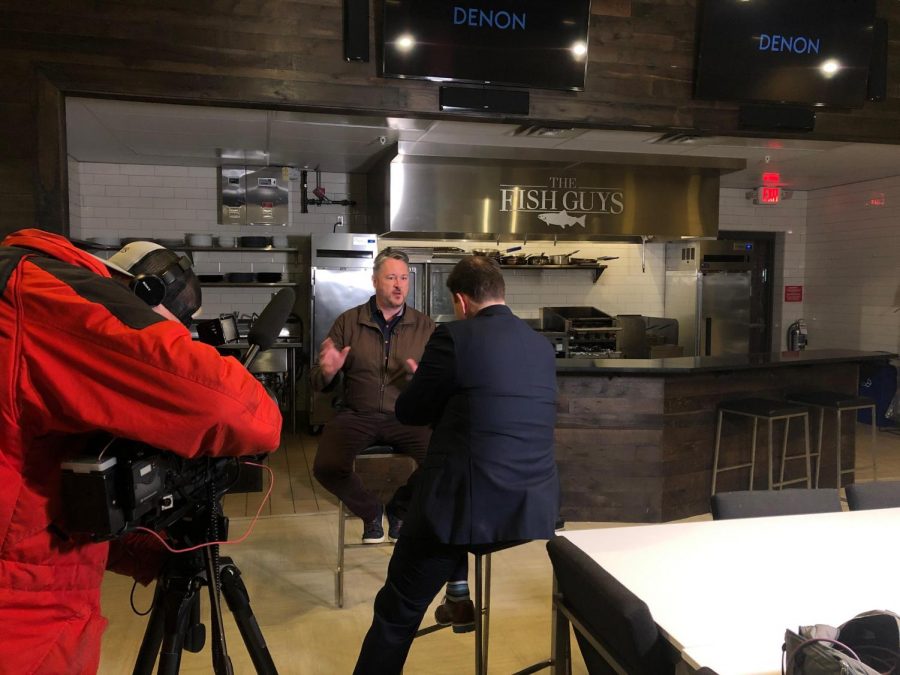 Tim Mckee being interviewed at The Fish Guy's.

The James Beard Award is often compared to the “Oscars” of the food world and honors chefs that demonstrate outstanding and unique work throughout their life. Tim McKee, Minnesota’s first chef to ever win the James Beard Award, never intended to go into the culinary profession and never attended culinary school.

McKee has a reputation of owning the best restaurants in Minnesota and has won many other awards that include The Food and Wine Award of the Top Ten Best New Chefs that launched his decision to become serious in the food business and career.

McKee attended the University of Minnesota and majored in anthropology and geology as well as studying air traffic control directly after high school. He never attended culinary school and never saw much of a future in restaurants. “Culinary school is a good path for some people and not as important for others. It had never occured to me that that’s what I wanted to go into. I started out working in kitchens to pay my way through college and I kept advancing and learning and being in the right place at the right time. The next thing you know I’m a chef at D’Amico Cucina,” McKee said.

While working at D’Amico Cucina, McKee started to discover his hidden talent and love of working as a chef. Although the culinary skills came naturally to him, he still wasn’t fully committed. After he received an award from a very prestigious food magazine, he decided to rethink his future. “It wasn’t until I won the award for the Top Ten Up and Coming Chefs nationally by the second biggest food minded magazines in the country I thought maybe I should become more serious. It kind of blew me away and I had no reason to expect that. They kind of made the decision for me,” McKee said.

The Food and Wine award was an abrupt turning point in McKee’s life. After winning, he was flown to New York along with other well-known experienced chefs while he was new to the community. “Everybody except me had some type of ownership in the restaurant they worked with. So I talked to my Sous-chef about a business plan and opened my first restaurant, La Belle Vie in Stillwater,” McKee said.

La Belle Vie quickly got the reputation of being the best restaurant in the state of Minnesota, but that was never McKee’s intention.“It was supposed to be that you can go and have a glass of wine and snack or have a nice meal, but we never planned on it being the apex of dining in the Twin Cities,” McKee said.

Since his first opening of La Belle Vie, McKee has opened eight other restaurants of his own. Along the way he was nominated for the James Beard Award. As a chef it is very rare to win after your first nomination. McKee was nominated three times and finally won after the third. “In order to be considered for the award there are a lot of parameters that you need to meet and you have to be nominated. You never know who is nominating you and you have to be voted on. There are several steps along the way. It is super competitive. It’s sort of your life’s work against somebody else’s life’s work,” McKee said.

Octo Fishbar, located in St. Paul is McKee’s eighth restaurant and is currently the only one he has running, but it is listed as one of the top restaurants in the Twin Cities. He is now working at The Fish Guys in St. Louis Park where he has the privilege to work on a different angle of the restaurant world. “I work with restaurants to help them problem solve and I build loyalty with them. I help them with ideas and direction as well as getting them the fish and meat that they need. I’ve never been involved in the wholesale aspect of the business. I’ve always been in the restaurants. It was a new experience for me, but one that I really really love,” McKee said.

There are many logistics that take place behind the scenes of a successful restaurant. Through McKee’s experience at The Fish Guy’s, he has learned a new important piece of the puzzle. “Working here is different in almost every way. Other than, we are still selling fish, but now we are selling fish to someone who is going to do something more with it. Before I would just be selling fish directly to the customer. It’s helped me understand expectations. Now, after knowing the kind of logistics it takes to get fish to our door it’s amazing that things happen the way you wouldn’t expect at all,” McKee said.

McKee has the ability to influence and affect change in the restaurant business from the wholesale perspective and has always been interested in sustainability. From that, he helped to launch Smart Catch MN that was first started in Seattle, Washington. “Smart Catch is an endeavor that helps restaurants move to a more sustainable model. What that means is the fish that they are selling are not detrimental to the fish population and the environment and also that they are harvested in a humane manner. On the coast it made a little more sense, but here nobody thought it was applicable to the middle of the continent,” McKee said.

Although it didn’t seem logical to implement, the program has been largely successful. “We were talking to the people from Smart Catch and ocean conservancy and I said that we should do something to build momentum around this and build awareness so we started the Smart Catch MN. I reached out to 100 or so different restaurants and got them on board with the idea and it’s been one of the most popular outlets for smart catch nationally. We now lead the nation with how many restaurants are committed and involved in the program and we are working on trying to become leaders in the people that are really dedicated the the program. Hopefully by this time next year it’ll be all throughout Minneapolis and St. Paul,” McKee said.

As an experienced chef who was able to become successful without culinary school, McKee has advice for anyone looking to pursue a career in the culinary field. “Even before I would recommend someone to go to culinary school I would recommend to get into a kitchen where they like what they’re doing and just work. The culinary profession is not for everyone and it is really disruptive on any sort of lifestyle. It’s hard work with long hours and is physically challenging. You want to make sure it’s the right thing,” McKee said.

Despite McKee’s talent, he believes there is always room for improvement.  “My favorite thing to cook is something that I haven’t cooked before. I am always always always trying new things. I am kind of ridiculous about how much I read. I read cook books like novels all the time,” McKee said.