New Minnesota United Stadium shows what soccer should and can be 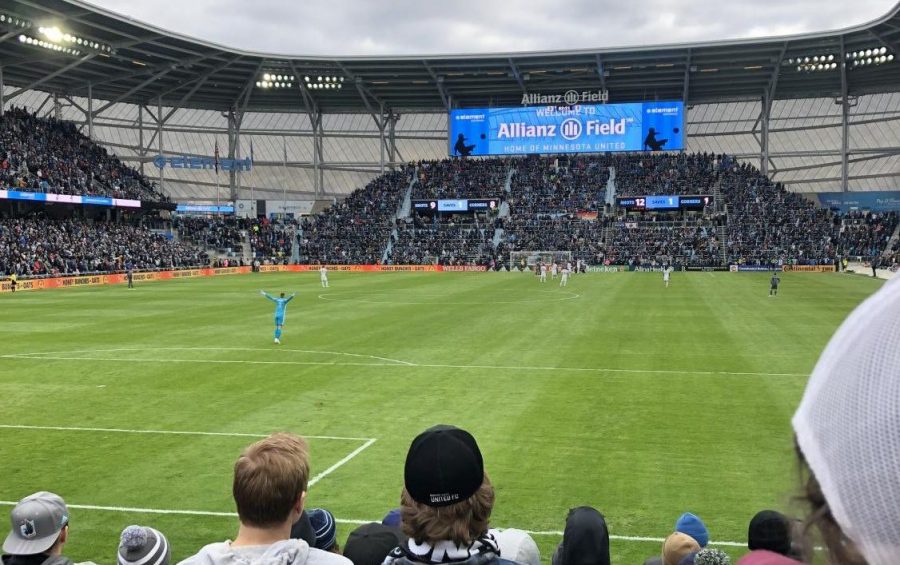 The sleek and packed together design of Allianz Field makes soccer fans feel as if they are watching the soccer game in Germany, not America.

Minnesota United finally got to show off their new stadium, and it was amazing. After having to wait until their third season in Major League Soccer, fans were able to watch a game inside the 200 million dollar stadium. Despite only earning a draw in the home opener versus New York City F.C, the atmosphere was amazing and really showed what soccer can be in Minnesota.

Allianz Field is unlike any other American sports stadium or arena I have been to. The sleek and packed together design makes fans feel as if they are watching the soccer game in Germany, not America. The design really captures the soccer atmosphere, with one end of the field––nicknamed the “Wonderwall”––having no seats and being designated as a place for the fans who sing and cheer all game long. There is not a bad seat in the house, and by sitting anywhere in the lower deck attendees have a fantastic view of the field.

Inside the stadium, there are a fair number of options for food. Of course, there are the stereotypical stadium food stands, but there are also some unique places to get pulled pork or custom nachos. For adults, there is a massive “Brew Hall” that also has bar food as well as foosball for people who want to watch indoors at the stadium.

There are two massive team stores, but unfortunately, everything seems to be overpriced and crazy expensive. The fact that a Minnesota United Soccer jersey is $120 while a prospective buyer can go to Dick’s Sporting Goods and get a European soccer jersey for 90 bucks doesn’t really make sense. Another problem is that the concourses are packed, and when the Minnesota United sell out every game this season, that will be a problem.

If the team can start stringing together some wins, MNUFC could be the next big thing in Minnesota.