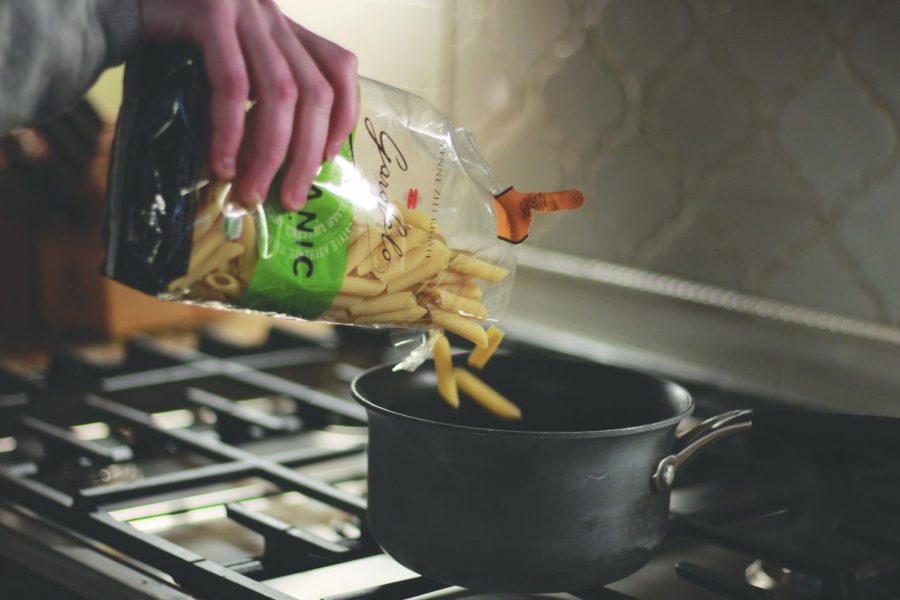 In this picture, penne pasta being poured into a bowl by Madeline Kurtovich’s mother. Some might claim penne is the best type of pasta, despite ravioli’s absolute superiority among the pastas (in Sol’s humble, and obviously correct, opinion).

Ravioli is just objectively the best type of pasta. It’s basically a pasta pizza roll. Pasta stuffed with sauce and cheese. How ingenious is that? Not since the swiss army knife has anything ever had such versatility. You’re basically getting three foods in one. Now that’s value. Ravioli is just the best tasting as well. Well prepared ravioli is soft yet defined in its shape and texture. When you bite into the ravioli you are greeted with an explosion of flavors, a feeling that can’t be captured by any other pastas. You can tell the prestige and quality of an Italian restaurant by the ravioli they have. Every bite is a flavor sneak attack. Ravioli is the best.

Although it may be an uncommon pasta, ditalini is my favorite. It is the type of pasta everyone enjoys eating, yet no one knows its exact name. After reading this article, I would encourage everyone to look up a picture, so you can sigh and say “ah, I love that pasta!” It pairs perfectly with parmesan cheese and salt. It’s great with many sauces: alfredo, pesto, red sauce, etc. Ditalini is my go-to noodle for pasta salad: the way the peas hide in the little noodles is pure perfection. And although it has the same amount of carbs as any other pasta, it makes you feel like you’re eating less because the noodles are so small.

Fusilli is definitely the best pasta. Now, you might not know what I’m talking about right now, but once you do, you will definitely agree with me. So, fusilli is the corkscrew shaped pasta and is the best shaped pasta. It’s easy to grab with your fork and it’s fun to eat. There’s no struggle like there is with linguine; fusilli is simple, just how you want your food to be. In addition, it tastes so great with any pasta. You can put cheese on top, smother it with pesto or tomato sauce, even add it to some alfredo, or just pair it with some butter. Also, it’s great for pasta salads. So next time you’re at the grocery store, you now know which pasta is the correct pasta––not all pasta is created equally.

Far too often I walk into a grocery store and pick up a bag of egg noodles or fettucini to eat as an evening meal. Fettucini, spaghetti, or egg noodles are the most basic noodles in the noodle family. That’s why I’m personally a fan of switching it up every once in a while and using shell noodles. Shells are the best noodles for their unique texture and their intricate designs. Shells make pasta more enjoyable to eat because when you are given a plate of shell noodles covered in a delicious alfredo sauce, your mind instantly pictures the beach. If you want to be less generic and make pasta more fun to eat, I highly recommend mixing things up with shell noodles.

Gnocchi is a wonderful delicacy in North America, one that people tend to save for when they can cook it traditionally. Everyone sets out to make an authentically Italian dish, and some cooking scholars theorize that a singular gnocco could legitimately resurrect Cicero if anyone tried hard enough. That’s simply because it transcends the entire league of noodles, and earns the respect it gets. It has the great nutritional value that other pastas don’t, being made from potato in addition to other good stuff. The shape of gnocchi allows people to drown it in as much sauce or seasoning as possible without losing its weight or its flavor.

As a proud Pastafarian (Google it), I am an avid lover of all things related to pasta (i.e. lasagna, tomato sauce, Italians in general). However, when it comes to the best type of pasta, spaghetti is always a safe best. I like to think of spaghetti as being the pasta for people who don’t like pasta. Why? It’s literal baby food. Like, toddlers eat this stuff. It’s so simple. It’s noodles and sauce, and if you feel inclined, you can add a meatball. Unlike some of the more sophisticated pastas, spaghetti is actually a universally-liked dish that appeals to a large age range.

While I am a very strong believer in the sentiment that “no pasta is bad pasta,” I do think that penne is one of the best types. It is very versatile, and can be eaten alone, with a variety of sauces, in pasta bakes, casseroles, and more. It isn’t as messy as other pasta types like spaghetti, so it is perfect for every meal, and at any time. My personal favorite penne meal would have to be the Noodles and Company Penne Rosa; that meal is far superior to most other pasta meals, and I order it every time. While I can try to respect others and their opinions, any person who doesn’t enjoy penne pasta is no friend of mine.

Bow tie pasta is best, is it not? Okay, let me break this down a little bit. I will say bow tie’s fantastic shape, full of little grooves, is responsible for keeping all the delicious flavor locked inside. There is no chance any pesto is gonna get forgotten in the pan when bow tie pasta is involved. The taste is great and clearly, the shape helps with that, but that isn’t something you can trust in a pasta debate. All pasta tastes great, but who doesn’t love a little flair added to their dinner? They are perfectly bite-sized and are outrageously cute. All other pasta is too basic. Obviously, the people who eat anything else are boring.