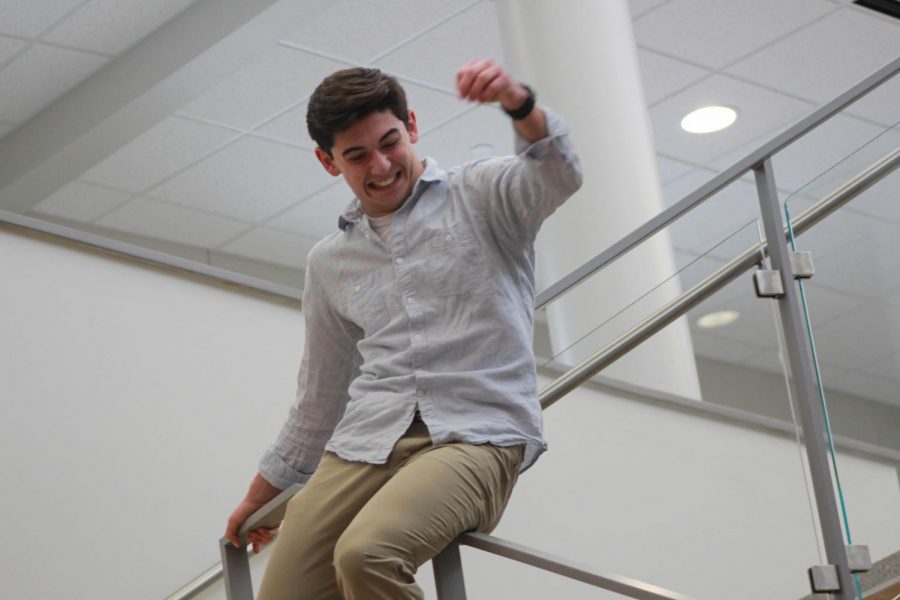 Giving new meaning to the term "senior slide,"Matt Hansberry literally slides down the railing in the new Atrium. Many seniors look forward to the senior slide, which typically begins in late April to early May.

With the second semester half done, seniors’ grades begin to drop. This phenomenon is known as the infamous “senior slide” and is currently affecting BSM seniors.

Students in high school are often defined by their grade level: Freshmen are the kids, who don’t know what’s going on and are busy being, well, freshmen. Sophomores are the forgotten students of the school, doing whatever one does sophomore year. Juniors are the grinders, who have a tough year of work ahead of them as well as the pity of everyone who isn’t a junior. But seniors are different. Seniors are bursting at the seams with excitement at what lies ahead while also often filled with indifference to basically everything academic. This feeling of being “done” with school enters many seniors’ minds and leads to dropping grades. “I’m already into college, so there’s no point anymore; I’ve been senior sliding since freshman year,” senior Dylan Drees said.

The senior slide is a common occurrence amongst students whose time at BSM is coming to an end, and it certainly doesn’t go unnoticed by the BSM faculty.  “[The senior slide] usually begins after Spring Break or early May. It varies from student to student, but I do see grades begin to drop,” math teacher Ms. Rosalie Goldberg said.

One of the biggest reasons for the senior slide is that students have already been admitted to college. Students work hard their whole high school career to get into the school of their dreams (if not, something close to it) and once they’re in, some seniors feel like the grind can finally be put on pause.

Senior Sami Kalman, however, has indulged herself in the senior slide. Kalman started off the year well, but she eventually reached a point of relative indifference. Kalman’s senior slide started about a month ago after missing some school. When she came back, she had loads of homework but wasn’t up for finishing it all. Kalman isn’t completely over school; she just cares a lot less. “My grades are dropping immensely each day; I see my PowerSchool grades pop up on my phone, and I get scared,” Kalman said

Senior Sarah Kinney seems to have struck the ultimate balance. “I’m not senior sliding per se, but I used to have an extremely perfectionistic mentality about grades. Now, I study and do my homework, but I’m not stressing out about a poor score like I used to,” Kinney said.

Whatever the case, the senior slide is underway in the class of 2019.