Colonel Whitney spoke to students about the Air Force 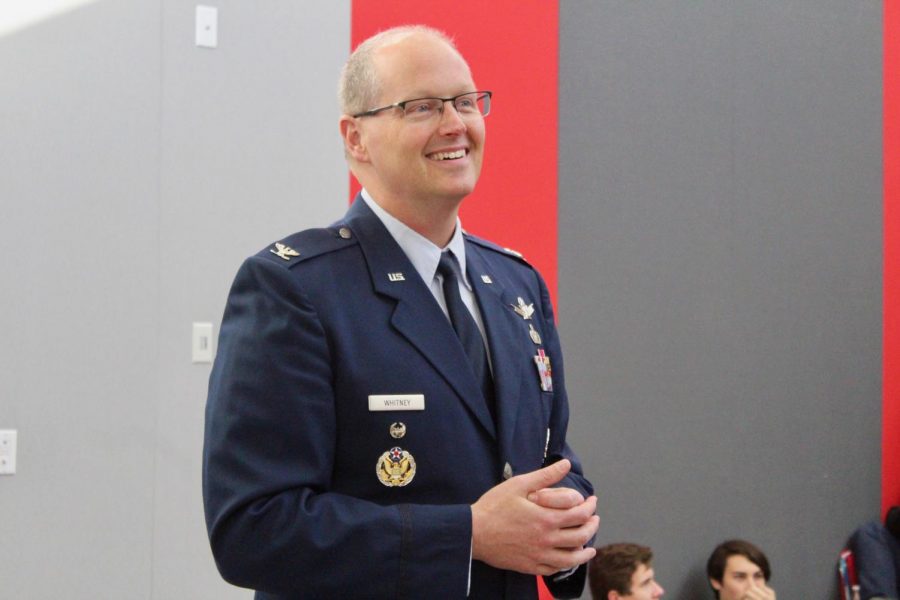 BSM alum Col. Whitney came to talk to students about the Air Force.

Monday, January 28th, BSM alum Colonel Steven Whitney visited the senior high to speak about his position in the Air Force and the value of GPS. Multiple engineering classes came to Colonel Whitney’s speech, which was presented during fourth and fifth hours.

During Colonel Whitney’s time in the Air Force, he has risen to the rank of Director of the Global Positioning Systems Directorate, working out of the Air Force base in Los Angeles, California. He oversees a large team of military and non-military personnel alike. “My team is responsible for building all the satellites… we also set all the standards for how your phone works with GPS,” Whitney said.

Besides speaking about his own experience, a large part of Whitney’s speech involved opening up the floor for questions from students in the engineering classes. The topics ranged from the Engineering I students’ projects to the preparations for RoboCup. Colonel Whitney was impressed at the real-world skills that students are learning in the engineering classes. “You’re using Python, and you’re using Raspberry Pie… I saw some 3-D printing… we’re doing all of that as well… all of the things that you’re doing there are the skills and capabilities that we look for,” Whitney said.

Colonel Whitney also had a chance to tour some of the engineering rooms and meet some of the students before his speech. He was impressed at the technology that was available to BSM engineering students, especially since it was at a high school level. “I thought it was fabulous…  I’ve seen college programs like that,” Whitney said.

There was no engineering program when Whitney was a student at BSM; he took four years of math and science instead. Regardless, he still feels that BSM prepared him well for his future. “Between the academics, the athletics, and then… even the personal foundation, I think, is probably one of the biggest reasons I succeeded in the Air Force. The foundation from Benilde has been amazing and has helped me on the way,” Whitney said.

The realization that it is possible to go so far in life with the BSM foundation impacted some students. “I want to go into the military… [he] made [that dream] more realistic, not like some magical world,” sophomore Oriana Sampson said.

Although Colonel Whitney was impressed with the technology available to the engineering students and the skills that they were being taught, he stressed the importance of the mindset that they learned in the engineering classes. He believes that the skill of problem-solving is the most valuable thing that the students are learning. “You’re learning how to problem solve… and try things, and fail a lot. We need people who think more like you,” Whitney said.