Inside a conversation with Congressman Joe Kennedy 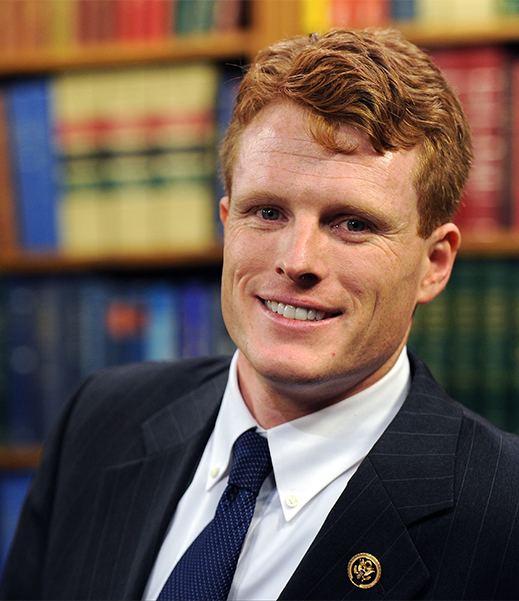 Democratic Congressman Joe Kennedy was elected into office in 2013.

Democratic Congressman Joe Kennedy III of the fourth congressional district of Massachusetts has become a rising voice in the Democratic party. Throughout his three terms in Congress, he has advocated for equality, immigration rights, and has given the Democratic response to the State of The Union.

Although he comes from a political family and has enjoyed politics, Congressman Kennedy did not see himself being elected to office in his early 30’s. Prior to becoming a politician, he was a prosecutor in Massachusetts and decided to run for office when former Congressman Barney Frank announced his retirement. “I was always interested in [politics]. It was not something that I thought I would necessarily be doing in my early 30’s––I was a prosecutor, I just changed jobs, I really enjoyed that job. I was going to get engaged, hopefully, to my then girlfriend, now wife… I had different ideas out there, it did not entail running a Congressional campaign. It certainly came as a big surprise to me, but I’m glad it worked out,” Kennedy said.

Kennedy began receiving national attention when he called out former Speaker of the House Paul Ryan for saying the repeal of the Affordable Care Act was an “act of mercy.” Currently, there are not many affordable healthcare options, but the Congressman believes that something like universal healthcare could happen one day, and points to Massachusetts as a place that has near universal coverage. “Something like universal healthcare is certainly realistic. The fact of the matter is, while there were challenges with the implementation of the Affordable Care Act––for states that have successfully tried to implement it and have done a good-faith effort in implementing it, like Massachusetts––you can get pretty close to universal coverage. Massachusetts has about 98% of its people covered with insurance…Coverage is not the same as access, and there are still challenges that we have to address even in my home state of Massachusetts around cost, around access, that are different than coverage. But without question, there are measures that Congress can take to try and ensure everybody does increase their access to care at a price they can afford, while working towards that day where we can finally ensure that every single person in this country gets access to the healthcare they need when they need it,” Kennedy said.

The Congressman has been in office since 2013. Throughout his terms, he has advocated strongly for numerous issues, including immigration. He has displayed his dislike for the current administration’s policies. Kennedy has visited the border and has seen first hand what needs to change in terms of immigration policy and how the United States treats immigrants. “A lot needs to change around immigration policy. The United States is obviously a sovereign nation and we have the obligation and responsibility to protect our borders, to decide who is able to gain entry to our country and what that process is and how that process is designed…We need to make sure that one, protect those dreamers, the young Americans who were brought her when they were small children––through no fault of their own––are protected from deportation. We need to ensure the recipients of temporary protected status––hundreds of thousands of folks who have now lived in this country for years are not deported because President Trump decided to end a long-standing policy. We need to address the fact that there are roughly 12 million people here without proper documentation that are part of the staffwork of our communities and play an integral role in our economy and that are going to stay here. We need to find a way to bring them out of the shadows and make sure they are not being taken advantage of. We also need to make sure that the process to come into this country, whether that’s on business or [to] immigrate…I remember asking some experts when I was first elected, if I wanted to apply for citizenship in this country how long would it take, and they said that depending on which country I was coming from, longer than I would be alive. I was 32 at that point. If that system is going to take 60 to 70 years for somebody to work their way through a process, one could say that’s a problem. This is a system that is in dire need of comprehensive reform. Congress needs to find a way to update that,” Kennedy said.

Putting his political beliefs aside, Kennedy believes that everyone, including immigrants, deserves a fair shot, and deserves the opportunity to live and achieve the American Dream. He also views the American Dream as not being exclusive to those born in America. “I think the American Dream, as I believe in it, is the idea that every single person has a fair shot and a real chance to make the most out of your own talent and hard-work effort today, will be rewarded tomorrow and that If you are willing to put in that effort, that you will be able to provide for a stable existence for yourself and your family, and a better future for your kids. I think that has been the inherent promise as America as a country and our government has set up for people and I think that promise is at risk at the moment. I think that the challenge we face today is elected leaders are trying to make that dream somehow become zero sum. In order for you to achieve that dream, that this presence of somebody else here is going to somehow limit it. They are going to take your job… they’re going to take your opportunity, they’re going to take your home, they’re going to take your well-being. That’s a dangerous road to go down,” Kennedy said.

Kennedy has also been an advocate for racial, gender, and LGBTQ equality. Under the Trump administration, these groups of people have had their rights in danger, and the Congressman is doing everything he can to protect their rights. “The fundamental promise of this country is that everyone is treated equally and everyone is treated fair under the law. The sad reality is that’s a federal law, and we still fall short of that promise. Particularly for members of the LGBTQ+ community. We need to pass the Equality Act to make sure that sexual orientation and gender identity are not the grounds used for discrimination in basic civil rights law, we need to pass a bill that I wrote called the Do No Harm Act…We need to make sure that constant protection is necessary to end discrimination in our workforce, in housing, which the Equality Act and Do No Harm Act [would help]. We still [have] an awfully long way to go, to a time when the President of the United States won’t try to bar active-duty military soldiers and service members––because of their gender-identity––from serving in armed forces,” Kennedy said.

Last January, the Congressman was chosen to give the Democratic Response to the State of the Union Address. In this speech, he voiced opinions relating to immigration, equality, and how the country will persist. But, it was also the location of the response that had an impact. He delivered the speech from Diman Regional Vocational Technical High School in Fall River, MA. “Fall River, Massachusetts is an extremely proud city, and I am honored to be able to represent part of the city in my district. The students at the school are an extraordinary example of our country…It’s a vocational school that people believed years ago was perhaps fit for folks that wouldn’t necessarily be able to achieve their dreams from high school, and the school now is one of the best vocational schools certainly in Massachusetts, if not the country. The students coming out of that school are trained to have skills that enable them to compete for a job, not just tomorrow, but long into the future,” Kennedy said.

Since the State of the Union Response, laws have passed, there was a midterm election. Because there was minimal competition for the Congressman, he took the time to travel around the country, giving different candidates endorsements and helping get their message out. Most notably of these candidates was Texas Congressman Beto O’Rourke, who was running against Republican Senator Ted Cruz.

After the midterm election, where the Democrats took the house, Congress had the opportunity to vote then-House Minority leader Nancy Pelosi to the role of Speaker of the House. Although this vote caused some divide in the Democratic party, Kennedy was one of her supporters. “Speaker Pelosi is as talented a leader as we’ve seen in modern American history. She knows policy, she knows politics, she knows how to stand up to a bully, she knows how to get legislation passed. She is the perfect fit for our Congress today, I am thrilled that she is going to be leading our caucus,” Kennedy said.

Although there was the excitement revolving around the election of Pelosi, Kennedy has to focus on the shutdown at hand. This shutdown has stemmed from issues regarding the funding for President Trump’s border wall and has gone on for weeks, with numerous federal workers going without pay. Right now they are working tirelessly to reopen the government. “One, the President of the United States should never be taking federal employees hostage to try to implement a policy proposal. There are 800,000 individuals and their families going without their paychecks because the President of the United States decided that the government should be shut down [and] they should be held hostage until he gets what he wants. That is not how government is supposed to work. The Democrats here in the house, with Republican support have voted on numerous bills to open up the government, and the President [on December 20]…backed away from a promise that he made to keep the government [open]…The President should stick to his word from roughly two weeks ago and open up the government. The Senate should put forth the Legislation the house has already passed [with] Republican support to open up government. They could do that today, they could do that tomorrow and make sure the government is up and running so employees can meet their bills and their obligations, and the government can go back and serve the American people,” Kennedy said.

Because of his work he has put in as a member of Congress, as well as his strong political views, Kennedy has gained support from many people to run for a higher seat in politics. This includes roles such as President, Vice President, or Senate, but he does not want to seek a higher seat. “I have no plans at this point on a running campaign for national office. I think that there’s an awful lot of folks in that field––I expect there to be a spirited race, which is what our country needs. But I’ve got no plans to join,” Kennedy said.