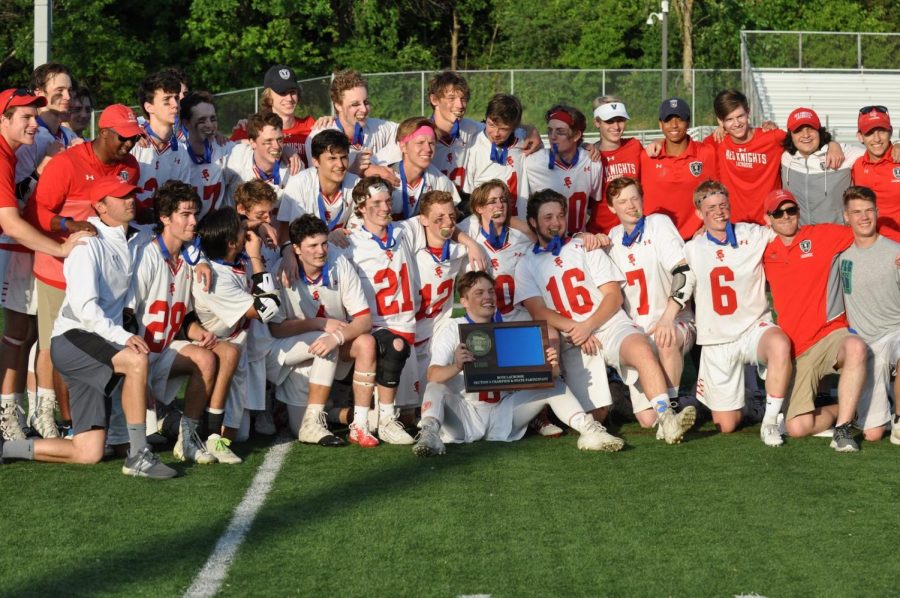 The 2018 boys' team celebrates after winning the section championship to secure a spot in the State Tournament.

From lacrosse college commits to people looking for a good time, lacrosse intrigues a wide variety of students at Benilde-St. Margaret’s. Lacrosse provides a connection for student-athletes to enjoy a competitive aspect and to develop friendships. Leaders, such as current seniors Nick Carpenter and Shay Kinney Leonhardt, provide an uplift to the team with their skills and experience.

Coach Chaun Klemetsrud, Defensive Coordinator:  “When Rob Horn was hired as the head coach, he reached out and asked if I wanted to be an assistant coach.  Knowing that BSM has always been a special program in Minnesota lacrosse with a winning history and the opportunity to coach alongside a good friend, I accepted and will now be entering my fourth year with the team.”

Coach Rob Horn, Head Coach: “I can’t really think of why, but I think about something that someone once told me, everything I learned about life, I learned on a lacrosse field growing up.  I learned to win, to lose, to compete, to work with teammates, to be humble, to cry – I learned the successful traits that I needed for the rest of my life – that doesn’t really speak to why then, but it speaks to more about why now, and why I coach.  Sports can teach us many things about ourselves in that moment, but also for the future. I hope to share some of those lessons with my players along the way.”

Shay Kinney Leonhardt, Varsity Lacrosse Player: “I started playing because my brother played when he was younger, and then started playing again around 8th grade, so I decided to play.”

Quinn Ehlen, Former Player: “I picked to play lacrosse because I wasn’t good at baseball.”

Everett Palmer, Former Player: “I played lacrosse because I wanted to be with my friends.”

Buzz Williams, 2018 Alumni, Goaltender, and Senior Captain: “Another 2018 graduate, Noah Swindlehurst, convinced me to play during our American Literature class.”

Pepe Smith, Junior Midfielder: “Because it’s something I genuinely love to do. It’s good practice for me in real life to have a goal and not stop until I succeed.”

Benji Barry, Senior Player: “I really enjoy both the game itself and the team.”

Mia Sidel, Manager of Hockey Team/Super Fan: “I played lacrosse freshmen and sophomore year and had always been interested in the statistics of sports.”

Isabel Erickson, Former Boys’ Lacrosse Manager: “I have a lot of friends on the lacrosse team, and I wanted to be part of it.”

Anna Carr, Varsity Manager 2017: “It’s like a brotherhood. They’re really supportive of each other. There’s lots of respect for teammates. Most guys’ sports aren’t like this, they’re super uplifting towards each other. I had a lot of friends on the team and I was at all of the games the year before…Like a superfan.”

Isabel Erickson: “My friend was a manager and asked me if I wanted to be a manager, too, and it sounded like fun.”

Jack Keller, Starting Goalie: “Because when I play it is a completely natural experience. Lacrosse is more than just a sport for me and for our team. And I mean, why not lacrosse?”