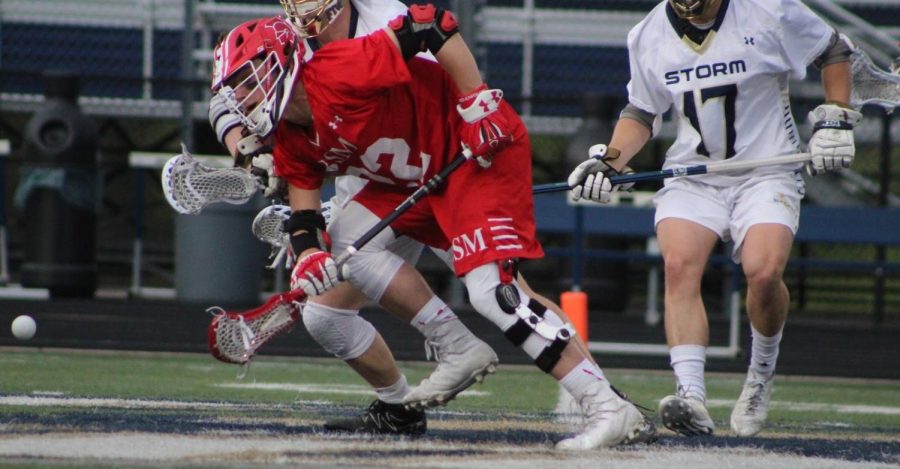 Jack Budniewiski wins yet another face off to guarantee BSM possession.

The BSM boys’ lacrosse team has only been around since the early 2000s and didn’t form an actual team until 2007. Since then, they have had a rollercoaster of a ride. They have brought BSM three state championships, including the first year the sport competed in the MSHSL. Even though they have come up short in recent seasons––annoyingly getting second place two years in a row––they have had a long history of being a top Minnesota team that has created many memories with each other.

Jerry Pettinger, BSM Athletic Director: “For the first two seasons, it was more just practice seasons and the kids would play for club teams, so that was probably early 2000s, then the spring of 2007 was the first MSHSL season, and we won that year.”

Rob Horn, Head Coach:  “I was fortunate enough to have coached here during the early part of my coaching career, and nothing ever really came close to what the BSM community feels like.”

Shay Kinney Leonhardt, Current Player and Captain: “My favorite memory would probably be when we beat Eden Prairie my sophomore year on a goal by Jack VanOverbeke after three overtimes.”

Pepe Smith, Current Player: “I was on the team the past two years in which we went to the State Championship. Each time after losing, it is truly heartbreaking. Coming to the realization that the seniors’ high school careers are done, and that I wouldn’t be playing with them again hits hard. At the same time, we all celebrate our success of the season as a whole, and how far we’ve grown as a family.”

Buzz Williams, Former Player and Captain: “We went to the State Finals my junior and senior year. I loved every moment of them. It made my season at least another month longer to spend time with the guys I care for more than anyone else. I wish we could have won at least one year because I feel an emptiness that to this day still gets to me.”

Quinn Ehlen, Former Player: “I had a great experience last year. It was a successful season despite the loss, and I loved every minute spent with my team.”