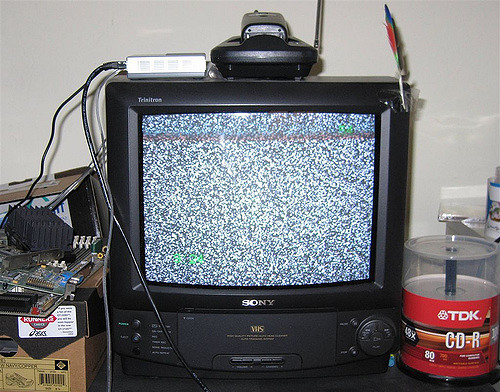 Watching shows on cable is just as outdated as this TV.

Just recently I did something I hadn’t in a while; I turned on my TV and went channel surfing. It’s been at least a year or two since I did that. Ever since all of my favorite shows began appearing on Netflix, Hulu, and Amazon Prime Video, I’ve seen next to no reason to return to cable television. Why? Because it’s outdated.

First point, the quality of the shows. The same NCIS spinoffs and Law and Order clones litter the television, like trash on the streets of a metropolitan area. Boring family sitcoms are so common that they’ve all blended together into one giant amorphous blob of mediocrity. Don’t even get me started on the homogeneity of the other current trends, such as hospital shows, teen dramas, hospital shows, reboots of 90’s shows, cop shows, gritty action shows, and did I mention hospital shows? Netflix offers more variety, and often many contemporary cultural phenomenons (Stranger Things and Orange Is The New Black come to mind) are born on these services. A lot of the big hitters nowadays (such as Game of Thrones, This Is Us, and Westworld) are funded by companies that are throwing their hats in the streaming ring.

Second point, convenience. Did you happen to forget to tape the newest Law and Order: SVU episode at 9:00 PM Central Standard Time because you arrived home late? Well, you are all out of luck then. Cable television isn’t the forgiving sort. Either you make it home in time to watch every single second painfully terrible acting from Ice T, Law and Order: SVU’s current lead, or you can go cry salty, bitter tears into your pillow at night. Needless to say, the relationship between cable television and its consumers is a highly unbalanced one.

Third point, price in relation to choice. For only $10 a month you can be watching hundreds of thousands of different shows on your favorite streaming service. Or, you can fork over $49.99 for 140 channels, or more appropriately, twenty channels you might actually watch and over one-hundred you won’t even bother with. Netflix, Hulu and Amazon Prime may lack the sheer number of programming, but you can get shows from all eras of history, as well as all genres. On most networks, you are restricted to whatever shows they are currently airing or have currently bought the rights to air. There aren’t many reruns from that show you got into three seasons ago on most networks, but they are on Netflix.

Also, who watches all one hundred-forty channels? I almost never explore past the first twenty or so channels I begin finding shows I like on. Time is precious, and you wouldn’t want to waste time on the 24/7 Racoon Trash Scavenging Footage Network when you could be enjoying some glorious Cooking Channel shows.

I admit it: I am a dedicated patriot of streamland. Yes, I truly believe that streaming services are the future. Why should I have to keep track of every single half-hour on a network if only two or three hours of programming are actually going to be relevant to my television interests? About a quarter of the time shows will swap their time-slot, so now your entire schedule is messed up just because some absolute nitwit decided that Jane The Virgin was just too scandalous for 6:00 PM, and would be much better suited for 7:00 PM, which is when all the filthy degenerate heathens begin watching apparently. With Netflix, you never have to wait to watch your favorite shows (unless they are under production by Netflix). You can watch whatever, whenever.

Cable TV is a worthwhile investment if you are the type of person who wants to stay up to date with shows as they air, but if you don’t mind waiting these shows usually end up on a streaming service at the end of the season anyway. But, if you want to be able to go back to old shows and have more autonomy over your viewing choices, then streaming services are the way to go. The situation with cable TV and streaming services is very much a horse race, and there’s no reason to bet on the inbred mule that has three legs and no eyesight when you can bet on a purebred horse trained since birth to race.