The Red Knights lineup before the 2017 State semi-final game.

Any team needs to have great players to be successful. Over the years, the BSM lacrosse team has seen many great players. Each one brings their own personal attributes to the team to give them success: some of them contributed their outstanding athletic abilities, some were leaders who helped the team face any adversity they faced, and some just brought the team comical relief when they needed it most.

Jerry Pettinger, Athletic Director: “Bo Mlnarik was one of the first players I remember to play on two state championship teams in the same year because he was on the boys’ soccer team and the lacrosse team that won State in 2006-07.”

Pepe Smith, Junior Midfielder: “Favorite player to be on a team with was definitely Brian Arnold or Johnny Brask. My freshmen year, Brian was a senior and always jokingly bullied me in practice, and it helped me ease my nervousness, which I’m sure wasn’t his intention. Johnny Brask was a senior last year and has been friends with me since I played in a few B squad games in the summer going into my freshmen year. Love the kid.” 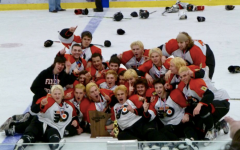 Fly or Die: An Oral History of the Flyers

Matthew Dowden, Current Player: “I would say the backbone of our team last year was our goalie, Buzz Williams. Statistically, he was the best goalie in the state, and having him between the pipes gave us the confidence that we could beat anyone.”

Jack Keller, Starting Goalie: “Buzz was my top player from last year; it was amazing to look up to him and learn under his leadership. I learned a lot from him. He was a beast in the net.”