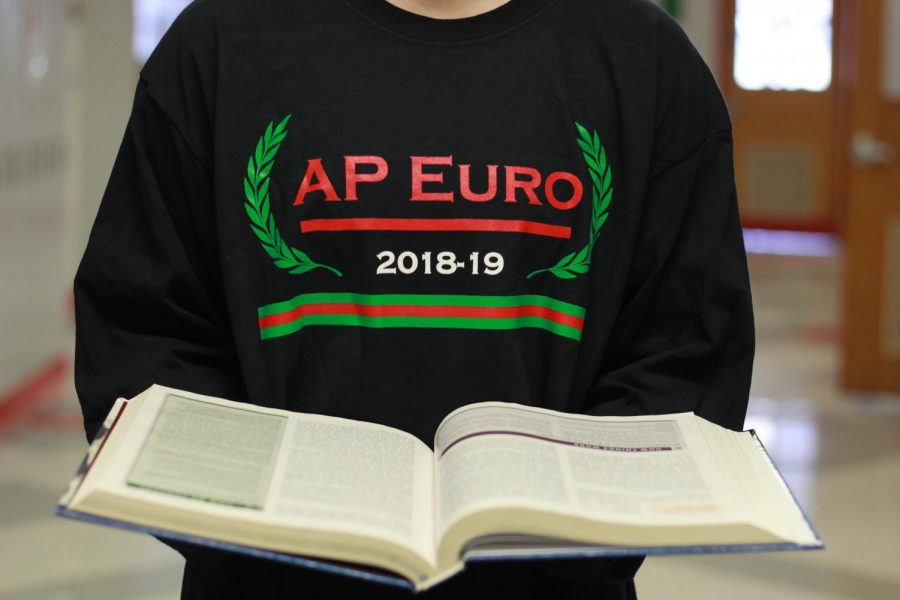 The AP Euro class is known for their T-shirts.

Nearly everyone who went to high school is familiar with the class AP European History (commonly known as “AP Euro” by those zealous enough to take it). Taken by hundreds of thousands of students nationwide, AP Euro is one of the most popular AP courses offered by American high schools and also one of the most challenging.

Known for its heavy amount of coursework and custom T-shirts, AP Euro is one of BSM’s most popular choices for seniors who are passionate about history and aren’t afraid of a little hard work. “We always have homework every night, which is…it’s OK. I mean, it’s an AP class, so it’s kind of expected,” senior Malinda Beason said.

The homework, which Beason says is typically around six pages of reading and notes, is part of Ms. Cherie Vroman’s plan to help her students prepare for college. “I get a lot of emails from students once they go off to college and most what I get back is ‘This class really helped me for college; it helped me really learn to take notes in an efficient manner’,” Vroman, the teacher for AP Euro, said.

However, the notes Vroman assigns each night isn’t the only thing that gives AP Euro students a leg up by the time college comes around. Rather her teaching style, in general, is similar to what is used by many college professors across the United States. “The other thing I’d say that makes this class a little unique is because we cover so much in such a short time and because we do have to devote time to skill building in class, I’d say about half of what you’re responsible for on the test I cover in class and the other half you have to learn all on your own. We just don’t have time in class to cover it all. But that’s what a lot of students tell me is beneficial to them when they go to college is that having to learn things on their own because so much of college is, you know, ‘Read that book and then you’re going to tell me about it on the test; I’m not going to talk about it in class’,” Vroman said.

While this style of teaching may sound rigorous to some, the class itself is enjoyed by many who choose to take it. “It’s super fun. Just with the games and stuff, you learn a lot even though it feels like you aren’t. I think that’s fun,” Beason said.

Furthermore, AP Euro is the only class at BSM with its own T-shirts––a custom started years before Vroman became the official teacher for the class. “They’re fake Gucci, so that’s funny,” Beason said.

While the T-shirts and in-class work may be some of AP Euro’s most appealing qualities, the class is certainly not one to sleep through. “You really have to put a lot of work into it to get an A. I think it’s one of the hardest AP classes at [BSM], just because it’s unexpectedly difficult if you don’t do the work or if you fall behind…In AP Euro, you have to pay attention and there’s more stuff you actually have to understand and analyze rather than memorize. We start in the Middle Ages and some of that stuff applies to what we are learning now in the late 1800s. It builds on itself,” Beason said.

Beason also explained that tests are where most of the students’ effort in the class shows. “Tests are pretty hard, I would say. Like, it depends on how hard you studied and that sort of thing but it’s an AP test so it’s AP-level questions, which is more historical thinking and skills like that. Along with multiple choice section, we have an essay, so our tests are two days,” Beason said.

Despite the challenging curriculum, the students’ hard work certainly seems to pay off in the end, with around 80% of students on average scoring a three or above on the official AP test in May. Likewise, the class is a good choice for anyone with an interest in history or in improving their written communication skills. “If you like history, then I think it’s a great class for you. If you want a class that’s going to help with your reading comprehension, your note-taking, your studying skills this class will do it,” Vroman said.

Though whether you’re a history buff or not, one piece of advice remains timeless. “Be prepared for a lot of work and always do your homework,” Beason said.