The wait for “Red Dead Redemption 2” is finally over

After falling in the love with the original "Red Dead Redemption," fans waited eight years for its sequel and were anything but disappointed with the outcome 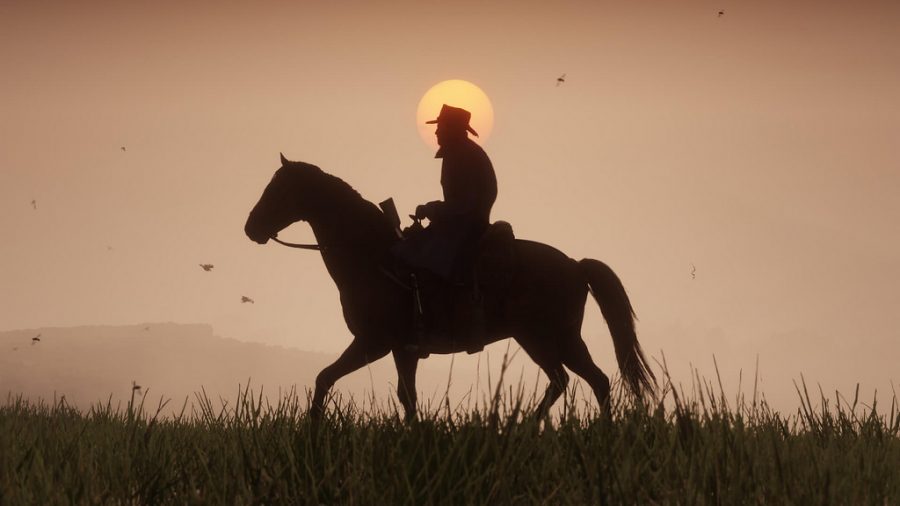 A cowboy riding his horse during the sunset

When people think of Autumn, some of the first things that come to mind are fun outdoor activities such as pumpkin patches, hayrides, and apple orchards. However, this fall season, many gamers stayed indoors. In addition to the hot chocolate and hoodies, the fall has also been a time when many fun, new video games hit the shelves. Fall of 2018 saw the release of many fun and exciting video games such as Call of Duty, Black Ops 4,  Marvel’s Spider-Man, and Assassin’s Creed Odyssey. And despite the massive popularity of the aforementioned, the most anticipated game was without a doubt Rockstar Games’ Red Dead Redemption 2.

Red Dead Redemption 2 is Rockstar Games’ long-awaited sequel to the original Red Dead Redemption and the third installment of the Red Dead franchise. RDR2 Is a western-themed, action-adventure game set on the American frontier during the late 1800s. The game is played from a third-person perspective in an “open world” where the character can explore the extensive virtual world and interact with other characters and creatures at their own liberty. Similar to RDR1, Grand Theft Auto, and other Rockstar games, the game features a morality system so players’ actions and decisions will affect and influence how other NPC’s (Non-Playable Characters) treat your character. For example, if you commit a crime in one town, you will be regarded as a criminal in other towns across that specific region and constantly have to ward off police and bounty hunters.

The game’s main story follows your character Arthur Morgan, an outlaw trying to survive alongside his fellow gang members during the end of the age of outlaws and crime in the American midwest. The game’s main story is divided into different chapters. Each chapter represents a new set of obstacles and challenges Arthur and his gang must overcome.

Players can also choose from a variety of side-quests to participate in ranging from bank robbing to treasure hunting to go along with the game’s main missions. It also offers several leisure activities such as fishing, hunting, and poker for endless entertainment beyond the main story and side-quests.

One significant aspect that makes RDR2 different from RDR1 is RDR2’s Online mode. Similar to Grand Theft Auto V’s online mode, In Red Dead Online you can rob banks, hunt, and go on missions with your friends or chose one of the many entertainment options that RDR2 has to offer.

After the massive success of the first two games, the hype surrounding RDR2 was immeasurable. The game was first announced in October of 2016 and was among the top trends on Twitter and Rockstar Games’ parent company Take-Two Interactive’s stock price rose by six percent. The game broke records for the largest number of pre-orders on PlayStation Network. Since then, the release date of the game has been delayed twice due to Rockstar executives refusing to accept anything short of perfection. Rockstar Games’ was even met with some criticism earlier this year after it was revealed that RDR2 game developers and artists had been working 100 hours a week. It was later clarified that the developer staff chose to work the excessive hours further proving their commitment to achieving excellence.

Upon release, the game received tremendous praise from fans and critics. It is currently one of the only games to have ever scored a perfect 10/10 from IGN and it is the highest rated PlayStation 4 and Xbox 1 game on Metacritic. IGN also explained that RDR2 is “standing shoulder to shoulder with Grand Theft Auto V as one of the greatest games of the modern age.”

Along with RDR2’s overwhelmingly positive feedback from the media, the game also experienced record-breaking sales. The game made 728 million dollars in revenue over its first three days. The largest opening weekend in the history of entertainment.

After having played the game myself for 10+ hours, I can confirm that RDR2 definitely exceeds the extremely-high expectations and was well worth the eight-year wait. The main story is very profound and thought-provoking and the design of the game is beautiful. I have had to restrain myself to not complete too much of the main story just so I can keep myself entertained for weeks to come. RDR2 is also a very addicting game. It can be played for hours at a time without becoming repetitive, tedious, or boring. Over Thanksgiving, I constantly felt the urge to retreat to my basement and sneak away from my family just to go play.

I would highly recommend RDR2 if you are tired of Fortnite and have time on your hands – because this game will be hard to put down once you start! It would also make a great holiday gift this December.