Inside a conversation with Peggy Flanagan 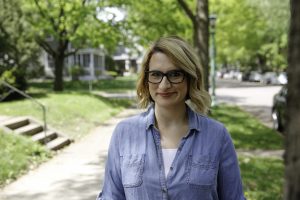 Politician Peggy Flanagan has the opportunity the become the highest ranking native woman in office. She is striving to create "One Minnesota" and improving healthcare, women's health, and education.

DFL Lieutenant Governor nominee Peggy Flanagan did not have a typical entrance into politics. She started her work in politics by volunteering and eventually running for Minneapolis School Board. She focuses on politics of inclusion and authenticity.  On November 6, Flanagan has the possibility to become the highest ranking native woman to hold public office.

Growing up, Flanagan’s family had talked about voting and the DFL, but she never thought about going into politics as a job. When she began volunteering on the Paul Wellstone campaign during her senior year at the University of Minnesota, she realized she could make politics a career. “I remember there was this moment, in this big warehouse, and there wasn’t a lot of money left, and we had to hand make a bunch of signs with markers. I was in this back room with all these kids…There was this moment; I stopped for a second, and I looked around the room…I just thought this is what I’m supposed to do for the rest of my life. I didn’t think that meant run for office, but I thought it was my people…The native community, we’re not as involved as we could be in this work. I want to change that. Electoral politics is a place where you can test for power, and a tool in our toolbox to make change that we want to see. After that, I kept doing organizing work, and a lot of people on the Wellstone campaign took me under their wing,” Flanagan said.

Now, as Flanagan is on the DFL ticket for Lieutenant Governor, her campaign has a large focus on creating “One Minnesota.” For years, there has been a tendency to pit urban and rural communities against each other, but for Flanagan and her running mate Tim Walz, this is an idea that they reject. They realize that they need to bring people from all backgrounds to the table and be able to have them tell their stories. “Part of achieving that goal of ‘One Minnesota’ is listening to Minnesotans and not making decisions in a vacuum. That means working with folks on the other side of the aisle to find common ground and it means forming unlikely alliances and coalitions,” Flanagan said.

One major issue this election has been healthcare. If elected, Flanagan and Walz would like to create “MinnesotaCare.” She believes that the state needs to talk more about providing healthcare and the pricing of healthcare. The plan for funding this insurance would rely on the provider tax, which is a tax paid to the state government, and the total sum is distributed to healthcare providers.

This plan of care would allow for Minnesotans to have more than just one option in terms of healthcare providers. Flanagan wants people to able to have the same access to healthcare that she is able to get. “My daughter Siobhan got really sick. Her asthma got to the point where she needed to be hospitalized, and I didn’t think twice about bringing her to the emergency room at Children’s…We are going to have to pay a chunk of change, but it’s nothing compared to what it would’ve been without health insurance…[I was at the] Franklin Hiawatha Encampment and one of the conversations that I had was with a school social worker from Minneapolis Public Schools, and she had visited with a Mom whose daughter has severe asthma and is the same age as my daughter…she needed to keep her in a tent…it had to do with having access [to healthcare,]” Flanagan said.

Walz and Flanagan also have a focus on women’s health. Endorsed by Planned Parenthood, Flanagan believes that her and Walz’s records will reflect the work they will do. They want women to have the right to decide what they do with their body and make decisions with their healthcare provider. Flanagan says that  DFL Governor nominee Walz would plan to veto any bill that would infringe on women being able to make decisions with their doctor, because they believe it is important to stand firmly on this issue is important due to what is going on in Washington D.C..

Aside from healthcare being a priority, the campaign focuses on other issues, like closing the opportunity gap among students. “In St. Louis Park, for example, we have a program called racial equity coaches. These are teachers who go into classrooms and essentially coach teachers on how to best connect with the students in their classrooms. Teachers have found this so valuable in St. Louis Park that they have pooled their Q Comp (Quality Compensation) dollars…They have invested in this because it is such a valuable program. One of my friends is a high school teacher in St. Louis Park, and he said the thing that he didn’t realize is that everyday when students would come into class, a lot of African American students would sit in the back and just wouldn’t engage through the rest of class. So [his] equity coach was like, ‘What would happen if you spent transition time in the back of the classroom engaging kids throughout the back?’…He said that everything changed. The kids started sitting in the front of the room, [they] built a relationship, and their scores went up…This is a program I have proposed pilot dollars for in the legislator, and I think it’s something we should take statewide because we’ve seen the opportunity gap start to close in St. Louis Park,” Flanagan said.

Along with the idea of closing the opportunity gap, Flanagan also wants to make sure that students have teachers who look like them. “[We have] to make sure that our students have teachers who look like them, that we have curriculum that reflects the students in their classroom, and that we start to enforce some of the laws that are actually in the books. Right now you are mandated by Minnesota state law to teach students about Native American culture and history, that law is not enforced… And preparing teachers for the students who are in their classroom…I didn’t have a teacher who looked like me until I was a sophomore at the University of Minnesota. Everything changed…I took honors level coursework for fun. Dr. Brenda Childs continues to be one of the teachers and mentors that I look to, and I know she’s that person for a lot of other folks in the community…My daughter is in kindergarten, she has Native American Kids Club, there’s other native administrators in the district; things are changing, ” Flanagan said.

Aside from focusing on child and teen education, Flanagan and Walz would like to prioritize funding a two-year, tuition-free education to families who make less that $125k a year. Flanagan feels that if the Minnesota government were to prioritize their funding, there would be a change. For instance, there was a bill passed that gave large sums of money to cigar companies, so Flanagan believes that if they re-evaluated their funding, it would be possible. She wants young people to be prepared for what they want to do, and she believes taking a holistic approach to this is the best way to go.

If she is elected, Flanagan has the potential to become the highest ranking native woman to hold public office. She believes that the native communities have solutions, and she uses her job to give them space to talk. She believes that decisions have been made for native people, without native people being present. She wants to honor treaty rights and for Minnesota to become a state that people look to for a positive relationship between Native Americans and the state.

Flanagan sees that there is hope and excitement within the Democratic Party. But she is not taking anything for granted. She thinks that door knocking, calling, and having as many conversations with people can make change. Flanagan believes that their slogan of “One Minnesota” can resonate everyone across the state, and that the hard work being put in will hopefully pay off on election night. “I believe the politics of DFL and Democrats are the politics of inclusivity, and a politics that is better for Minnesota in the long term, which leads to more growth…We’re going to work with folks on both sides of the aisle no matter what happens. I feel the politics of fear and divisiveness and othering people, that is the politics that has been so devastating to people all across the state,” Flanagan said.

For young people interested in politics, Flanagan believes that volunteering on campaigns can be impactful. “Volunteer on campaigns. That is the best advice that I can give folks. I think a lot of times people think they have to go to college and major in political science. If political science is your jam, then you should major in political science. But, if something else gives you life and makes you excited about learning, study that. Because we need experts in all different areas to serve in political positions. Like I said, my trajectory on the Wellstone campaign was fast and furious, in 2008, I was able to work for Senator Franken and President Obama [in native communities] and you could see the policy priorities from our community reflected in their platforms because of the relationships we built…I think it’s a great way to learn how this work actually happens, it’s kind of messy, but can be really powerful,” Flanagan said.