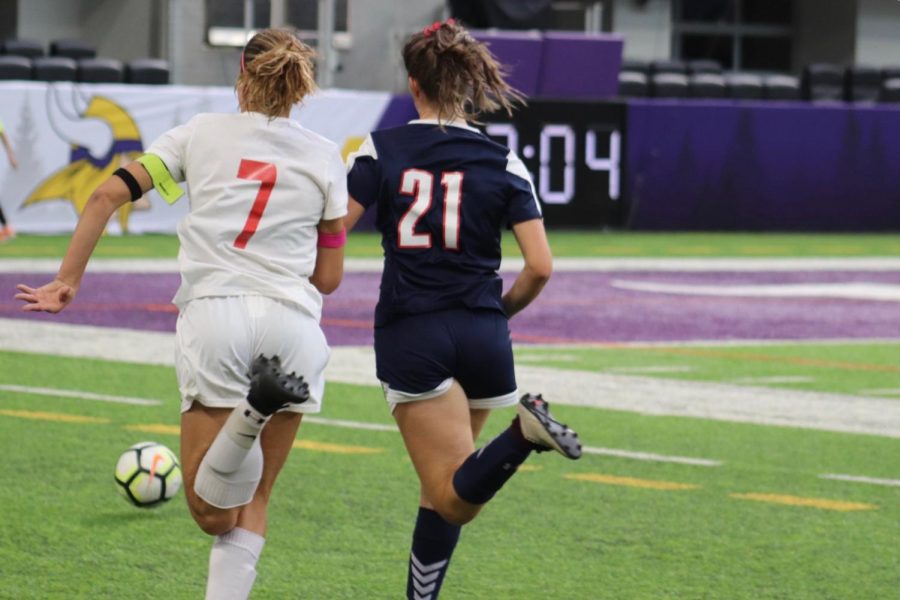 #7 Amanda Cassidy sprints down sideline to beat the defender downfield.

U.S Bank Stadium: The BSM Red Knights girls’ soccer played Orono in the state semi-final game today with a trip to the state championship on the line. Seeking their 3rd title in 4 years needed to get past their rivals, who they tied 1-1 earlier in the season. Unfortunately, after a long and hard fought battle BSM fell to the Spartans 2-1.

BSM led for most of the first half, scoring their only goal 6 minutes into the game off of a free kick by Amanda Cassidy. Following that goal the offense slowed down, only putting 3 more shots on net the rest of the game.

Not too long into the second half, Orono put two in the back of the net, taking the lead 2-1 with 34:28 left in the game. The Spartans continued to put on pressure and control the ball the rest of the game, tallying 6 shots in the 2nd half forcing BSM senior goalie Annie Pohlen to rack up 6 total saves. Another thing to note is BSM only subbed in two girls the entire game, whereas Orono swapped in seven.

Following today’s loss, the Red Knights will face Holy Angels in the third-place game, Wednesday morning, where they will hunt for hardware.